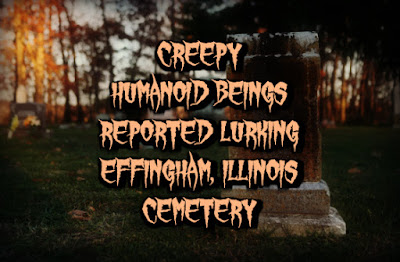 This actually gives us a lot. What we appear to have here is another type of Giant Sloth again.  What is important is that they access cemetaries and surely in order to harvest maggots.  This also means the ability to burrow quickly underground as well which is also indicated by those three long claws on the hands and feet.

The hairless condition conforms with cave residence as well.  Otherwise, what we are likely seeing are females as the  broad shoulders are not in evidence.

The lifeway of the male Giant Sloth is shocking enough, so it is not surprising that the females would also shock us.  They may also have a greater need for a secure maggot supply.  There still must be plenty of burials in which a simple box is used as well..

A group of friends, and eventually other witnesses, have described ghoulish humanoids in and around a cemetery in Effingham, Illinois

"In 2010 two friends and I were driving around out in the country around in Effingham, Illinois. We live about 30 minutes away from there. This was a typical weekend night, driving out to a cemetery to respectfully explore. We were told the Kazbar (Ramsey) Cemetery, deep in the woods surrounded by caves outside of Effingham, was a really good place.

We head to Effingham and stop for sodas at a gas station and then head to the country. It's about 1 to 2 am, so it's dark. I see something with yellow glowing eyes off the side of the country road just past the ditch in the headlights. Too short to be a deer, but too big to be a possum or raccoon. As we get closer it gets clearer, and I realize what I'm looking at is skinny, hairless and grey, human-like but definitely not human. Crazy as hell looking 'thing.' It was crouched down. Its arms were incredibly long and looked like it could have been 7 ft tall or bigger standing. I can feel myself get cold and my heart race and my hair stand on that back of my neck. I kind of whisper to myself "WTF?" And then I heard my friend in the back seat shout "WTF is that?!" Complete shock and terror set in and I can't make a sound. I'm just staring at it. By that time we are right in front of it, passing it and it just watches us drive by. It slinks into the dark. Then we all just start screaming. Literally freaking the hell out. I was convinced it was a demon for months, but still doubted myself even seeing it. Thinking my mind was playing tricks on me. We didn't even make it to the Kazbar that night. We went straight home. I couldn't sleep that night.

Six months later I'm at a different friend's house and she gets a text from her cousin. It was the trail camera picture. I went cold again, the hair on the back of my neck stood tall again. I was seeing this thing AGAIN! I knew we weren't crazy, that there was something to this. He said he caught it on his trail camera one town over. (He told us later it wasn't his camera, that he was just pranking us) but I immediately recognized it. I asked her to send me the picture and I sent it to my friend who was with me when we saw it. He quickly replies "that's that f*cking thing!!!" I found out the picture was faked, but still can't help but to have my doubts. I researched the picture and demons to find some answers and found nothing.

Fast forward to October 2012 I'm on Facebook and I come across a page called "Weird Effingham, IL". So of course I start combing through the entire page and I find reports of sightings around the cemetery of creatures with glowing eyes. Nothing as in depth as what I saw but still enough to tell me that we are not the only ones who have seen something like that out there. I researched demons and paranormal some more. Still nothing.

In 2014 I'm scrolling through my Facebook news feed and the trail camera picture pops up. One girl I know posted it on the wall of another girl I know. So I immediately commented my story on it. When I go up to the previous comments I see that one of the girls was talking about seeing one! She replied to my comment and told me that she had seen it in the country in Effingham too! Back in 2011. This guy we went to school with commented on the status too and said that he had a friend that was super into the occult and that she said the are called 'ghouls.' So I went right into researching ghouls. What I find, blows my freaking mind! Lore says; they are cave dwellers. As I said previously the Kazbar Cemetery is surrounded by caves. They feed on the freshly dead and normally stay close to cemeteries to be close to food. They have been known to show themselves to humans when trying to get close to them to eat in times where fresh deceased bodies are scarce. I went to images of them and could only find illustrations but they look exactly like what I saw that night. Everything I was reading was falling perfectly in place. Lined up perfectly with my experience. I couldn't explain it away." WB

NOTE: These 'ghouls' are most likely the pale white crawlers or rakes that are constantly being seen throughout North America. Some people believe that they may even be Wendigo or some type of supernatural shapeshifting entity that are said to devouring human flesh. Some of the reports that I have received are quite interesting, and the witnesses tend to be very forthcoming. I have been talking with an individual in Ontario who has been plagued by these entities for many years. I may post his account at some point. Lon
Posted by arclein at 12:00 AM