Over 50,000 Traumatized Children Rescued by Military Out of Tunnels Beneath US Cities 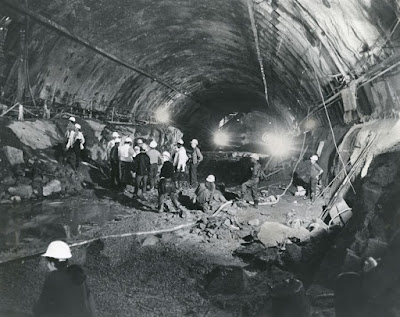 The numbers keep climbing and they have more to do.  As I have posted before, the military has built deep tunnels since at least back in the Thirties and likely  earlier as a likely response to WWI lessons.  It was always an excellent application of trained soldiers under the general budget.

A crew can drive on a single heading an eight foot by six foot tunnel through competant sediments easily enough at a pace past thirty feet per day.  Actually a lot faster but that is still two to three miles per year.  More likely it will approach ten miles per year.

Manpower would likely be a company of 200 men for a two  shift operation.  Thus ten crews can walk out a hundred miles per year.  Ten years gives us a thousand miles.  what you can easi8ly see is that it becomes completely possible to produce an extended network wherever it is important and even to contemplate long distance connections as well.  All tunnels would be tracked and likely use electric  rail cars for the most part.

I knew of this system from other sources, but also had insider confirmation on the reality of such military tunnels.  It was always one of the best responses to the Nuclear threat.  It is also cheap when you already have manpower needing to be tasked..

Retasking it all to support a criminal enterprise is a natural decision.


Over 50,000 Traumatized Children Rescued by Military Out of Tunnels Beneath US Cities

The count was now over 50,000 traumatized, malnourished and deceased children who have been pulled out of underground tunnels across the nation by the US Military and Marines since last October. The operations were authorized under President Trump as Commander in Chief, General Mark A. Milley and other military generals of the Pentagon Pedophile Task Force.

“Unfortunately there were more operations to go to save the children,” according to Timothy Charles Holmseth, reporter for the Task Force: https://youtu.be/UFaC_F6M_P8

Malnourished, caged and tortured children have been rescued, or found deceased, in underground tunnels beneath large and small US cities, including one beneath New York Central Park. Another tunnel was said to run from the Clinton Foundation building to the New York Harbor

Piles of little corpses, babies born to teens and even preteens in the tunnels who had never seen the light of day, deformed and traumatized children, preteens and teens who were evidently experimented upon and electro-shocked as part of CIA Mind Control and genetic experiments, sexually abused, locked in cages, tortured and killed to harvest their organs and Adrenochrome for the elites to drink in Satanic worship.

Over 170,000 sealed indictments filed in federal courts across the nation on those elites were in the process of being served. Most contained charges of pedophilia. Under the authority of Pentagon generals, serving of those indictments and rescues of the traumatized children were ongoing. There was literally an underground war in tunnels across the US, with both brave military troops and perpetrators being killed.

Apparently for months this secret US Military operation has been sweeping an extensive network of underground tunnels across the US and into Canada and Mexico to rescue thousands of horrifically abused children. Recent operations centered beneath major cities in New York, California, Florida, Texas and Washington. Intel video on the tunnels: https://youtu.be/l5cUsNTr4Yw

Last October an unbelievable 2,100 children being held in cages in underground tunnels at the California China Lake Military facility were rescued by Navy Seals and US Marines in a military operation using around 10,000 troops.

Recent earthquakes have been caused by the military blowing up Deep Underground Military Bases (DUMBS) so they couldn’t be used again. Military Special Forces were discovering many more tunnels beneath cities and towns all over the country.

The atrocities against children and youth that took place in the tunnels were so horrendous that if the stories were released right now, they were expected to cause rioting in the streets. The information would eventually be released, but for now we were asked to pray for the children and troops trying to rescue them.

The missions were being reported by Timothy Charles Holmseth of the Pentagon Pedophile Task Force. The news, not expected to be picked up by a George Soros-funded Mainstream Media and because of their own ties to pedophilia, was released by a Pentagon Commander who was head of the rescues.
Posted by arclein at 12:00 AM