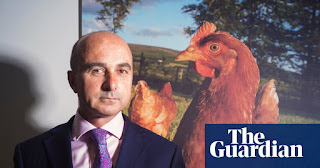 I am no fan of so called factory farming.  I am a fan of restoration farming which heavily applies mob grazing in order to stimulate fecundity and a rising carbon count.

The central problem is that you give up direct integration with land use in order to optimize a large population  All the animal outputs are then misapplied or at least reduced in value.  The mere fact that the animals are tight packed serves no ones interest and should never be done.

Do we have to have a flash virus pass through the city of New York killing two million to make my point that unnatural packing is biologically dangerous and certainly stupid.  All this when there are better and more profitable avenues available.

I know that we will get there in time.

sooner will be much better and far less dangerous.

It’s time the world woke up to the real impact of modern, industrial farming, says Philip Lymbery, author of Farmageddon and the Deadzone

Philip Lymbery, head of Compassion in World Farming and the author of two books on the destructive impact of industrial agriculture. Photograph: Sarah Lee/The Guardian


The world desperately needs joined-up action on industrial farming if it is to avoid catastrophic impacts on life on earth, according to the head of one of the world’s most highly regarded animal campaign groups.


Philip Lymbery, chief executive of Compassion in World Farming (CIWF) and the author of Farmageddon and more recently Deadzone, said: “Every day there is a new confirmation of how destructive, inefficient, wasteful, cruel and unhealthy the industrial agriculture machine is. We need a total rethink of our food and farming systems before it’s too late.”

His comments came on the eve of Compassion’s Livestock and Extinction conference in London which will bring together scientists, campaigners, UN representatives and multinational food corporations including Compass, Tesco and McDonalds. The conference aims to bring together a wide ranges of voices and connect up the many impacts that factory farming has on our planet.

The conference comes against a backdrop of alarming exposés of industrial farming. A week ago a Guardian/ITV investigation showed chicken factory staff in the UK changing crucial food safety information on chickens, while a month ago the European commission admitted that eggs containing a harmful pesticide may have been on sale in as many as 16 countries.


In the US in August, meanwhile, campaigners identified the world’s largest ever “deadzone” – an area in the sea where pollutants from farms create algal blooms that kill off or disperse marine life – and singled out the US’s heavily industrialised factory farm system as a major cause.


In an interview with the Guardian, Lymbery said that when he began campaigning on farm animals in 1990, it was still largely seen as a cruelty issue rather than something that went far beyond that.


Since taking over as chief executive of CIWF in 2005, Lymbery has focused on “moving the issue out of being a technical niche to get people to understand industrial farming as a big, global problem”.

Lymbery argues that factory farming is not – as some contend – an efficient, space-saving way to produce the world’s food but rather a method in which the invisible costs are actually far higher than the savings.

“Factory farming is shrouded in mythology,” he said. “One of the myths is that it’s an efficient way of producing food when actually it is highly inefficient and wasteful.


“Another [myth] is that the protagonists will say that it can be good for the welfare of the animals. After all, if hens weren’t happy they wouldn’t lay eggs.

“The third myth is that factory farming saves space. On the surface it looks plausible, because, by taking farm animals off the land and cramming them into cages and confinement you are putting an awful lot of animals into a small space. But what is overlooked in that equation is you are then having to dedicate vast acreages of relatively scarce arable land to growing the feed.

“The crops fed to industrially reared animals worldwide could feed an extra four billion [people] on the planet.”


As the global demand for cheap meat grows, the expansion of agricultural land is putting more and pressure on our forests, rivers and oceans, contributing to deforestation, soil erosion, marine pollution zones and the global biodiversity crisis, he said.


“The UN has warned that if we continue as we are, the world’s soils will have effectively gone within 60 years. And then what? We shouldn’t look to the sea to bail us out because commercial fisheries are expected to be finished by 2048 …


“The rainforest homes of the likes of jaguars and the critically endangered sumatran elephants are being razed to make way for intensive crop production and plantations that are feeding factory farm animals ... the mixed farm habitats of once common farmland birds such as barn owls, turtle doves and skylarks are being stripped away, and ... vast quantities of wild fish are being scooped up to feed industrially reared farmed fish and chickens and pigs, leaving the likes of penguins, puffins and other species starving.”

Antibiotic use is another red flag area. “There is now overwhelming evidence that the routine prophylactic use of antibiotics is leading to the rise of antibiotic resistant superbugs, and the World Health Organisation has issued warnings that if we don’t do something to curb antibiotic use in both human and animal medicine we will face a post-antibiotic era where currently treatable diseases will once again kill.”


Although some countries, the UK and the US for example, are now trying to cut back, antibiotic use is totally unregulated in other parts of the world: in China the farmers can just prescribe and administer antibiotics for themselves.

Lymbery believes that we already know the answer to this problem. Compassion advocates a reduction in meat-eating (Lymbery himself is vegan) but is not “anti-meat”. In the long term regenerative farming – a broad term that includes all sorts of practices such as rotational grazing, tree planting, improving soils, reducing chemical inputs, silvopasture and increasing biodiversity – is, Lymbery believes, our only hope and a movement whose time has come.


“Hilal Elver, the UN rapporteur for the right to food, has talked about the need to move away from industrial agriculture towards agro-ecological models. There is a groundswell – it’s almost starting to be a zeitgeist as key thinkers in civil society start to join the dots and see that actually we do need a new style of agriculture which goes beyond industrial agriculture, which goes beyond simple sustainability, which brings us to a point of regeneration.”


On the whole national governments have shown little interest in radical farming reform. But there have been a few notable exceptions such as India, Rwanda and Kenya, and the international community and the corporate world is increasingly interested in financing and supporting these models (USaid is funding a fantastic agroforestry project, although they may be hoping that Trump doesn’t realise this). And in the last few months there has been some support from surprising quarters, such as Michael Gove, the UK’s environment secretary, and his recent statement that US-style industrial farming will not be copied here. In the recent lead-up to the appointment of the head of the WHO, more than 200 scientists and campaigners signed a letter asking the appointee to promise to look at the “global health challenge” of factory farming which was widely circulated on social media and led to an editorial in the New York Times.


So how likely is it that we will get global action on food and farming? “I am sure that 20 years ago people calling for a solution to climate change were being asked exactly that question,” says Lymbery. “I believe that nothing less will be needed if we are to secure the future for our children.”
Posted by arclein at 12:00 AM