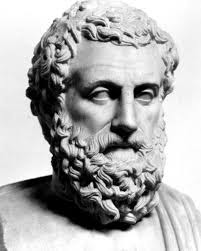 Yes he is back. The whole issue of final cause descends back to the issue of spirit as the underlying logic machina.  From that we confront once again the sixth operator of mathematical logic which is the true meaning of GOD.

The final cause is asking if this is good and that implies TIMEs arrow as well.

The absurdity of random choice was always impossible except to the intellectually naive and is dying a lingering death as our own knowledge expands inbexoribly into vast organized and ruled complexity.

He had it right the first time and we have merely digressed for a couple of thousands of years.

This is taken from a lecture given by Fr. Nicanor Austriaco, OP: “Virtue and the Desire for Happiness in a Secular Age.” In addition to being a priest, he is trained as a molecular biologist.

At 1 hour 4 minutes in, and for the next ten minutes, he is discussing the intersection of the current science regarding Aristotle’s Four Causes. To summarize, Aristotle offered us Four Causes: The Material Cause, the Formal Cause, the Efficient Cause, and the Final Cause.

Material Cause: “that out of which a thing comes to be, and which persists; e.g., bronze, silver, and the genus of these are causes of a statue or a bowl.”

Formal Cause: “the form … the account of the essence.”

Efficient Cause: “the primary source of change or rest.”

Final Cause: “the end (telos), that for which a thing is done.”

Modern science jettisoned two of these, keeping only the Efficient Cause and the Material Cause; there is no more Formal or Final Cause. Yet the classical account of virtue and goodness presupposes all four causes. Without a Formal and Final Cause, where is Virtue?

According to Fr. Austriaco, systems biology has recovered a notion of form. Man has about 20,000 genes; rice has 50,000; the worm has 13,000. Before the genome age, it was assumed that complexity was associated with the number of parts. This notion is totally gone now.

It isn’t the number of parts – it is how the parts are arranged. Once you start talking about arrangement and order, you introduce formal causality.

Further, our billions or trillions of molecules are arranged in a particular configuration, and these are moving along in time. Yet, we can predict how these molecules relate to each other, so we can predict where these will be five minutes from now. In other words, you have arrangement (formal causality) and what that arrangement will be as it moves toward the end (final causality).

Therefore, efficient and material causality are unable, by themselves, to fully explain biology. Fr. Austriaco exclaims: “Bye, bye Bacon; bye, bye Descartes. Aristotle is back in. Once Aristotle is back, natural law can be recovered.”

There is more here, but I am already in too deep on the science

From a different lecture, on a slightly different topic: Principles of the Moral Life, Fr. Gregory Pine, O.P. Starting at about the 5:00 minute mark, Fr. Pine offers:

This captures my lack of interest on the idea of spending energy trying to purify the non-aggression principle to the nth degree. We already understand the principle well enough; we don’t need to resolve the minutiae of what happens if Martians invade or cows fart.

What will it take to move toward liberty? This is the question. It won’t be found in further attempts at purification. I have suggested this path; it seems Rothbard has as well. If someone has a better notion, let me know.
Posted by arclein at 12:00 AM