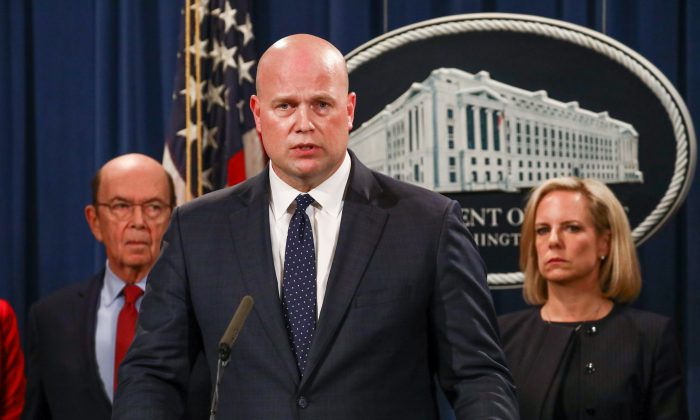 This has been always part of the Chinese inituiative and we have actually by and large ignored it.  a good part of that was driven by reral self interest.  It is really useful to have China do the build and to market globally no end of low end product.  This ultimately industrializes both China and everywhere else.  Except now they are simply getting greedy and allowing criminal behavior to be a business plan.

Now we shut it down by tackling the main entity.

This will lead quickly to a global movement by national entities to rein in such behavior everywhere.

By Cathy He,
Epoch Times


The U.S. Department of Justice (DOJ) unsealed two indictments against China’s Huawei Technologies Co., its chief financial officer (CFO), Meng Wanzhou, and several of the company’s subsidiaries, in a pair of legal cases accusing the company of violating sanctions against Iran, and stealing trade secrets from U.S. mobile carrier T-Mobile.

In a 13-count indictment, the DOJ said Chinese telecom giant Huawei misled a global bank and U.S. authorities about its relationship with a Hong Kong firm named Skycom Tech—which was, in fact, an unofficial subsidiary of Huawei that conducted business in Iran. Meng, who is currently released on bail in Canada and faces extradition to the United States, is listed as a defendant, alongside parent company Huawei and two of its subsidiaries, Huawei USA and Skycom.

“Both sets of charges expose Huawei’s brazen and persistent actions to exploit American companies and financial institutions and threaten the free and fair global marketplace,” FBI Director Christopher Wray said at a press conference in Washington on Jan. 28.

The charges add heat to the scrutiny Huawei already faces in the West over allegations that its products could be exploited by Beijing for spying—an allegation the company has repeatedly denied.
Violation of Iran Sanctions

In the first indictment, the DOJ revealed the charges that triggered Meng’s arrest in Canada in early December last year.

Prosecutors accuse Huawei of a long-running scheme, which started in 2007, to deceive numerous global banks and the U.S. government regarding the company’s business activities in Iran, a DOJ press release stated.

“[Huawei] willfully conducted millions of dollars in transactions that were in direct violation of the [sanctions],” Homeland Security Secretary Kirstjen Nielsen said in the press release.

Meng—who is the daughter of Huawei founder and CEO Ren Zhengfei—is specifically accused of making a presentation in August 2013 to a bank executive, in which she repeatedly lied about Huawei’s relationship with Skycom, according to the press release.
The CFO was released on bail Dec. 11, 2018, and is due to return to court in Vancouver, Canada, on Jan. 29. Acting Attorney General Matthew G. Whitaker confirmed that the DOJ will file an extradition request by the deadline of Jan. 30.

U.S. Commerce Secretary Wilbur Ross said the Trump administration is cracking down on those who violate trade sanctions.

Prosecutors also accuse Huawei of engaging in a concerted effort from 2012 to steal information about a T-Mobile phone-testing robot nicknamed “Tappy.” The robot, which mimics human fingers, was developed by the phone carrier to test smartphones.

T-Mobile previously sued Huawei for stealing technology related to Tappy. Huawei has said the two companies settled their dispute in 2017.

The indictment provides details into how the company sought to get its hands on the technology, including getting Huawei engineers to secretly take photos and measurements of the robot, in violation of confidentiality agreements with T-Mobile. In one case, Huawei tried to steal part of Tappy’s robotic arm to allow engineers in China to replicate the device.

The prosecutors’ evidence includes numerous emails exchanged between the parent company and Huawei USA over months showing attempts to obtain T-Mobile’s technology, said First Assistant U.S. Attorney Annette L. Hayes of the Western District of Washington. In one instance, Huawei USA allegedly sent an email to its employees acknowledging that its actions would be illegal in the United States.

“The conspiracy to steal secrets from T-Mobile was a companywide effort involving many engineers and employees within the two charged companies,” said Hayes.

The company, Hayes said, also allegedly had a bonus program to reward worldwide employees who would steal confidential information from competitors.

Huawei also is accused of obstructing justice by providing a false report claiming the attempts at stealing T-Mobile tech were the work of rogue employees, rather the company as a whole.

“The indictment … reveals just how determined Huawei was to steal T-Mobile’s trade secrets, how clearly Huawei knew that what it was doing was wrong, and just how far Huawei was willing to go to get the technology it wanted,” Hayes said.

The charges come just days before U.S. and Chinese delegates are due to resume trade talks in Washington, although Whitaker said the investigations were independent to the negotiations.
‘Milestone’

Rick Fisher, a China military expert and senior fellow with the International Assessment and Strategy Center, said the indictments are a ‘milestone’ in the U.S. defense against China’s espionage campaign.

He referred to security threats posed by Huawei, which were reiterated by Wray during the Jan. 28 press conference.

“It is public record that under Chinese cybersecurity law, Chinese companies like Huawei are required to provide, essentially, access upon demand with little to no process to challenge that,” Wray said. “So that’s why it creates the national-security implications that we’re concerned about.”

He added that the United States needs to continue its efforts to guard against the national-security threat.

“Huawei is just one piece of the iceberg,” Fisher said in an email interview.

“The United States now requires policies and regulations, to be fashioned in cooperation with our allies, to create broad protections against the predations of the Chinese military-industrial espionage complex.”
Posted by arclein at 12:00 AM