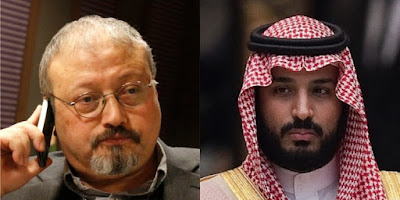 The Aramco IPO was a truly bad idea. Yet it almost happened.  After all the brokers would have scored monster fees and the music would have rolled along for a while.  Yet combining a public corporation and a royal's sense of entitlement is a marriage made in Hell.  In the end, we now see that sense in full flight and Khashoggi is dead.  Imagine the price movement of Aramco with this story line.

Global investors would bail in disgust.

The fundamental flaw with Royal families is that a reasonably competent member arises typically on the basis of one in twenty births.  In practice you need a hundred births in order to have a handful of capable choices.  Then they all have to be well trained.  Good luck with that plan as it also provides several separate courts all vying for the succession.  It never ends well.

MBS appears to be on the B team and will needs decades of maturation to be fully trusted.  How that can happen is an open question and the collapse of Saudi Oil is not far off at all.


Saudi Heir and Aramco Despair – a Motive for Khashoggi Killing

The brutal murder of Saudi journalist Jamal Khashoggi was preceded a few weeks by a major event that could be the key for why his assassination was ordered. That event was the cancelled stock market sale of Saudi Aramco shares, the kingdom’s state-owned oil company.

The Initial Public Offering of Aramco – the world’s biggest oil company – was the “brainchild” of Crown Prince Mohammed bin Salman (MBS), as told in this recent documentary. When he became heir to the throne in early 2017, the young prince made the partial sell-off of the state-owned asset the “cornerstone” for his far-reaching plans to reform the ultra-conservative desert kingdom.

MBS, the favored son of aging King Salman, was given free rein over major policy decisions, including trying to modernize the Saudi economy away from its near-total dependence on oil. The Crown Prince drew up a “Vision 2030” master plan to reinvent Saudi Arabia as a hi-tech business hub for the Middle East. The plan – widely hailed by Western news media as an “ambitious new beginning” – also included social reforms to give women more rights and to open up more lax leisure facilities, such as cinemas and sporting venues. The Western plaudits for the young royal pandered to his ego and vanity.

However, the thirty-two-year monarch has since fallen out of favor among his erstwhile Western backers over the gruesome murder of Jamal Khashoggi. Khashoggi was killed in the Saudi consulate in Istanbul on October 2 in what many believe to have been an assassination plot ordered by Crown Prince MBS. The House of Saud vehemently deny his involvement and claim that the murder was a “rogue operation” by Saudi intelligence agents who were sent to Istanbul to forcibly return Khashoggi to his native country. Few people – most notably US President Donald Trump – believe the official Saudi claim of MBS’ innocence.

The timeline of events is important here. Khashoggi went in self-exile in September 2017, a few months after MBS became heir to the throne. His next-in-line promotion was seen by many observers as a breach of the kingdom’s succession rules. MBS, with his father’s approval, bypassed other heirs who were higher up the succession ladder. It was a “power grab” by the sharp-elbowed MBS who is known for being arrogant and impetuous.


During his US exile, Khashoggi became a regular columnist for the Washington Post and a prominent guest speaker at various influential think tanks on Middle Eastern matters. A cardinal theme for the dissident was criticism of MBS and highlighting serious policy mistakes. Khashoggi was critical of Saudi Arabia’s war in Yemen, the blockade of Qatar, its destabilizing interference in Lebanon’s political affairs, as well as exposing the darker side of MBS’s authoritarian rule during the round-up and alleged torture of other royals, which the Crown Prince had been claiming was an anti-corruption crackdown. The young royal’s “reformist” image was therefore being marred by Khashoggi’s insider insights.


All this negative publicity – from high-profile media platforms in the US – is bound to have impacted on the strategy concerning the share sell-off for Aramco. The Initial Public Offering (IPO) of Aramco was said to be world’s biggest-ever stock-market listing. It had investors drooling. New York was vying with London for the deal.


The company was valued by the Saudi Crown Prince and his advisors at $2 trillion. The intended 5 per cent sell-off of company shares was calculated to raise $100 billion. That windfall was then supposed to be used to drive forward the ambitious Vision 2030 which MBS was staking his entire reputation and ego on.


But foreign investors began to lose confidence in Aramco’s valuation at $2 trillion – reckoned to be unrealistically high. Secondly, there were growing doubts about MBS as a reliable ruler. The much-vaunted stock-market launch of the company began to fade from the end of 2017 through early 2018. Investors became leery of what had been touted as the most spectacular capital venture ever.


As Aramco’s prospects dwindled, it was reported that King Salman eventually stepped in to pull the plug on whole concept.


Al Jazeera reported: “The king spoke – and a $2 trillion dream went up in smoke.” The Financial Times commented at the time: “Shelving the Saudi Aramco IPO [sell-off] is a blow to Crown Prince… For the king it maybe was too much to go down as the man who sold the crown jewels.”


The abrupt cancelling of the Aramco stock-market plan came as a severe knock-back to MBS. The young royal is known to see himself in the same mold as global entrepreneurs. When he was on a two-week visit to the US last year, he smooched with Silicon Valley figures and other business leaders. One can easily imagine the personal insecurity of this pampered Saudi heir trying to “prove himself” among what he considers “icons” of success.


With MBS’ Aramco “brainchild” aborted, the whole reform “master plan” of his Vision 2030 was also then thrown into disarray. No exaggeration, his world must have been turned upside down and his reputation badly dented. It’s hard to overstate how bruising the turn of events must have been for the “visionary” royal.


A CIA assessment of Crown Prince MBS, as reported by the Washington Post, refers to him as a “good technocrat” but also an arrogant and impetuous character. “He doesn’t seem to understand that there are some things you can’t do,” quoted the Post.


All this earth-shattering news came at the end of August, 2018, when the Western media revealed that Aramco stock-market plan was being ditched. What’s more, it was also clear that the once-buoyant image of MBS was being checked by his father.


Barely five weeks later, Jamal Khashoggi was lured to Istanbul on false pretenses to collect a legal document from the Saudi consulate. That was on October 2 when it is believed that he was tortured to death inside the consulate, and his body cut up with a bone saw for disposal. His remains have never been recovered.


It is claimed that MBS organized the plan to entice Khashoggi to Istanbul. The journalist was fearful of returning to Saudi Arabia because of his media criticism. MBS’s younger brother, Khalid, who was based in Washington as US ambassador, reportedly phoned Khashoggi to assure him that he would be safe to go to Istanbul. That must have been sometime during September. The Saudi embassy denies the phone call was made.


Jamal Khashoggi is not known to have expressed any public opinion on the proposed Aramco stock-market plan. But it can be fairly deduced that his critical writings concerning the “reformist” Crown Prince and the latter’s lack of credibility dealt a serious downer – at least indirectly – to the whole venture.


In MBS’ egotistical rage over his dream being squelched, Jamal Khashoggi probably emerged as the bane of the Crown Prince’s ambitions. In a five-week period, the journalist’s fate was sealed by a murder plot that bears the hallmarks of rage and revenge.
Posted by arclein at 12:00 AM