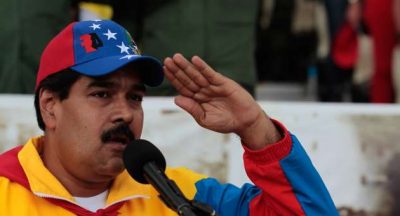 I am not too inclined to be any fan of Maduro or his predecessor who essentially wreaked his countries economy while promoting an anti USA foreign policy. It is completely possible to wreak your economy without making the USA an enemy ( Argentina ) or angering the USA without wreaking your economy ( Libya ).  These geniuses managed to do both.
At the present, they have hawked their oil to China and Russia who have obligingly sent warships to provide protection against a possible USA military intervention.  Off course the DEEP STATE is attempting to take advantage of this opportunity to start a nasty war.  Brazilian forces are now on the Border and somehow Columbia is also doing something.
The USA is essentially no longer buying much of their oil or at least is now in position to end the trade.    Particularly since the Canadian tar sands can readily displace all that refinery capacity in the USA.  The USA can actually walk away from Venezuela.
Thus neocon bleating aside, there is zero reason for Trump to act here.  Rather he is correctly sealing his borders to stop the migration risk cold.  This tosses that cat among all our well wishers throughout Central America.

What is clear though is that this was another planned DEEP STATE war making enterprise set in motion during the Obama Administration and it promises to engage both Russia and China who are trying to counter DEEP STATE criminality.  .
.
An Open Letter to the People of the United States from President Nicolas Maduro


“Disinformation by Omission”: Not a single Western mainstream media has published, quoted or commented on President Nicolas Maduro’s Open Letter to the People of the United States (see Google search).

This letter is addressed to the People of America. Please forward this text far and wide, across the land.

Americans can then make up their mind. Am I in favor or against the Trump administration’s resolve to intervene militarily against Venezuela?


If I know anything, it is about people, such as you, I am a man of the people. I was born and raised in a poor neighborhood of Caracas. I forged myself in the heat of popular and union struggles in a Venezuela submerged in exclusion and inequality.

I am not a tycoon, I am a worker of reason and heart, today I have the great privilege of presiding over the new Venezuela, rooted in a model of inclusive development and social equality, which was forged by Commander Hugo Chávez since 1998 inspired by the Bolivarian legacy. 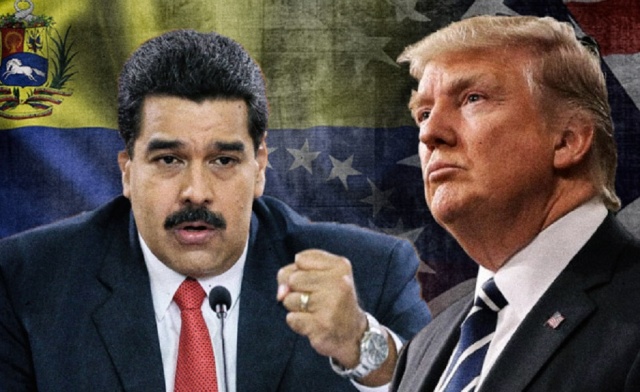 We live today a historical trance. There are days that will define the future of our countries between war and peace. Your national representatives of Washington want to bring to their borders the same hatred that they planted in Vietnam. They want to invade and intervene in Venezuela – they say, as they said then – in the name of democracy and freedom. But it’s not like that. The history of the usurpation of power in Venezuela is as false as the weapons of mass destruction in Iraq. It is a false case, but it can have dramatic consequences for our entire region.

Venezuela is a country that, by virtue of its 1999 Constitution, has broadly expanded the participatory and protagonist democracy of the people, and that is unprecedented today, as one of the countries with the largest number of electoral processes in its last 20 years. You might not like our ideology, or our appearance, but we exist and we are millions.

I address these words to the people of the United States of America to warn of the gravity and danger that intend some sectors in the White House to invade Venezuela with unpredictable consequences for my country and for the entire American region. President Donald Trump also intends to disturb noble dialogue initiatives promoted by Uruguay and Mexico with the support of CARICOM for a peaceful solution and dialogue in favour of Venezuela. We know that for the good of Venezuela we have to sit down and talk, because to refuse to dialogue is to choose strength as a way. Keep in mind the words of John F. Kennedy: “Let us never negotiate out of fear. But let us never fear to negotiate”.

Are those who do not want to dialogue afraid of the truth? 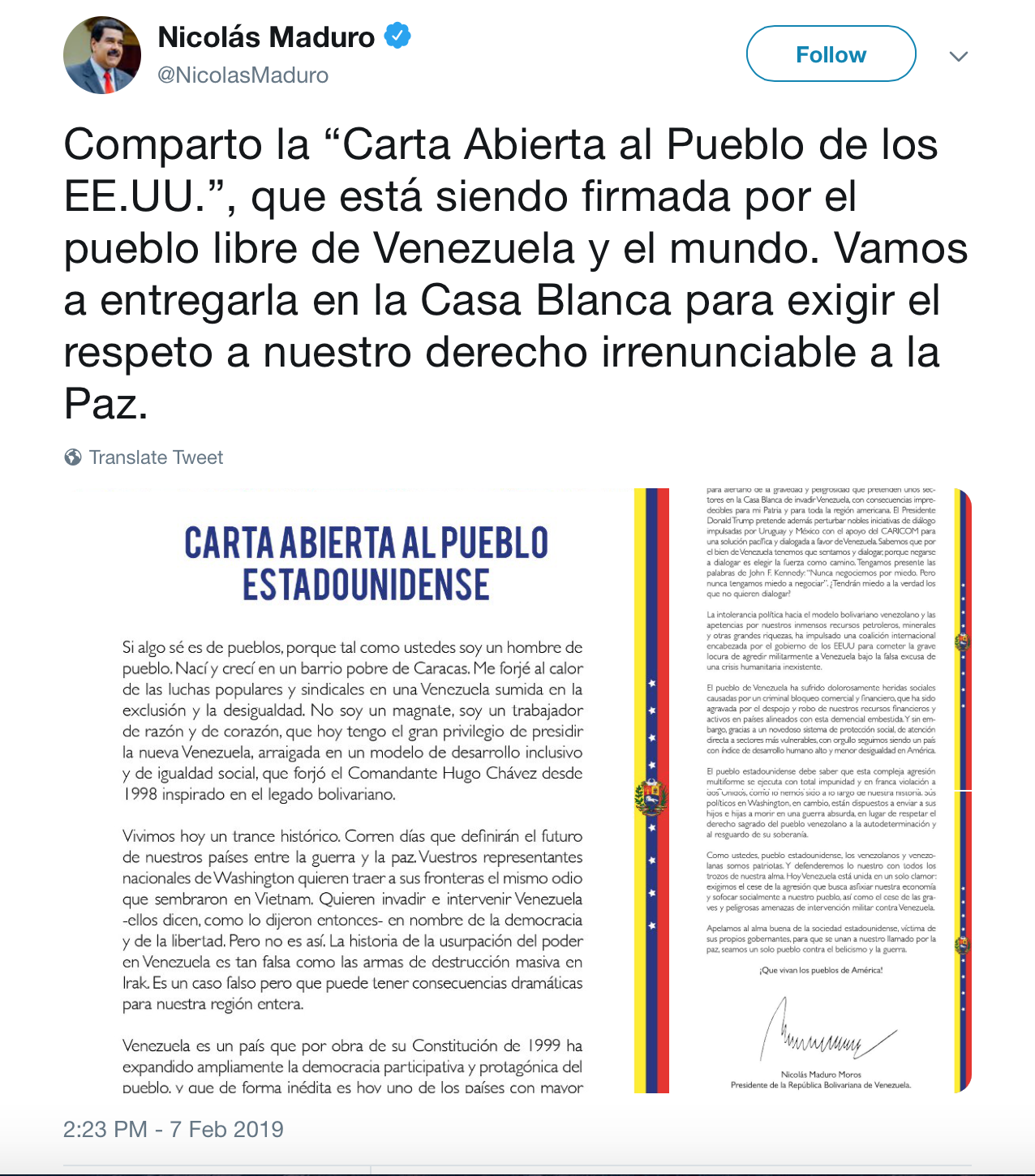 The political intolerance towards the Venezuelan Bolivarian model and the desires for our immense oil resources, minerals and other great riches, has prompted an international coalition headed by the US government to commit the serious insanity of militarily attacking Venezuela under the false excuse of a non-existent humanitarian crisis.

The people of Venezuela have suffered painfully social wounds caused by a criminal commercial and financial blockade, which has been aggravated by the dispossession and robbery of our financial resources and assets in countries aligned with this demented onslaught.

And yet, thanks to a new system of social protection, of direct attention to the most vulnerable sectors, we proudly continue to be a country with a high human development index and low inequality in the Americas.

The American people must know that this complex multiform aggression is carried out with total impunity and in clear violation of the Charter of the United Nations, which expressly outlaws the threat or use of force, among other principles and purposes for the sake of peace and the friendly relations between Nations.

We want to continue being business partners of the people of the United States, as we have been throughout our history. Their politicians in Washington, on the other hand, are willing to send their sons and daughters to die in an absurd war, instead of respecting the sacred right of the Venezuelan people to self-determination and safeguarding their sovereignty.

Like you, people of the United States, we Venezuelans are patriots. And we shall defend our homeland with all the pieces of our soul.

We appeal to the good soul of American society, victim of its own leaders, to join our call for peace, let us be all one people against warmongering and war.

Long live the peoples of America!

President of the Bolivarian Republic of Venezuela
Posted by arclein at 12:00 AM