The invasion of Italy (WW2) was useless and gave the allies no strategical advantage?

We can assign this scheme once again to Churchill's Strategic genius.  As far as the Mediterranean was concerned, with North Africa settled, grabbing Sicily, Corsica and Sardinia made excellent sense as it provided air bases close by Italy from which to interdict movement such as might exist.  This also provided a base from which to threaten the French Riviera which presented no such geographical advantage to defenders.  It would have at least served to tie up as many German troops as Italy.

The Allied force in place would then be in position to effectively sit out the rest of the war while the focus shifted to Northern France where major offensive actions could be supported far better from England..

As it was Kesselring was able to force a full on defensive retreat in which the allies paid heavily, and yes, the mere dispatch of a real German strategic reserve into Italy would have been an allied disaster if done while retaining strategic surprise. They were hardly dug in and  the Po valley is Tank country.  It was far too late of course.

Recall that England interdicted resupply to Africa from Malta alone.  Sticking to the Islands was a useful and low cost method.
..
.
Why do many historians say that the invasion of Italy (WW2) was useless and would not give the allies any strategical advantage?

Because when the Allies looked at Italy, and planned how they were going to easily overcome ‘the soft belly of Europe’, they forgot a little thing. The Italian army and state, as evidenced by their performance so far, were very much the soft belly, true.

The Italian peninsula… not so much.

The Allies didn’t quite recognize that. The Germans, however, did.

A narrow peninsula across which any front would be too short to easily deploy overwhelming numbers, which also was heavily mountainous and very tactically defensible: the state of Italy might have been an easy target, but the land itself definitely wasn’t.

The Allies found that out the hard way. Their relatively easy stroll up from Sicily came to a very abrupt and very bloody end in early December. Beforehand, the Allies had faced and, through bloody combat, breached the Volturno and Barbara lines, the first two of the newly found German defenses across the peninsula. Allied morale was high: although the German defense was tenacious, they had already breached two defense lines.

Then they reached the Bernhardt Line.

It took six weeks for the Allies to breach the Bernhardt Line, defended by a single corps. Unbeknownst to the Allies, Bernhardt wasn’t a main defense line either: tougher than Volturno and Barbara it was, better built and better defended, but far from one of the main lines Kesselring hedged his bets on. No. Kesselring’s bets were on the line just behind Bernhardt: the construct of concrete that Volturno, Barbara and Bernhardt existed just to allow it to be prepared as much as possible.
The Gustav Line. 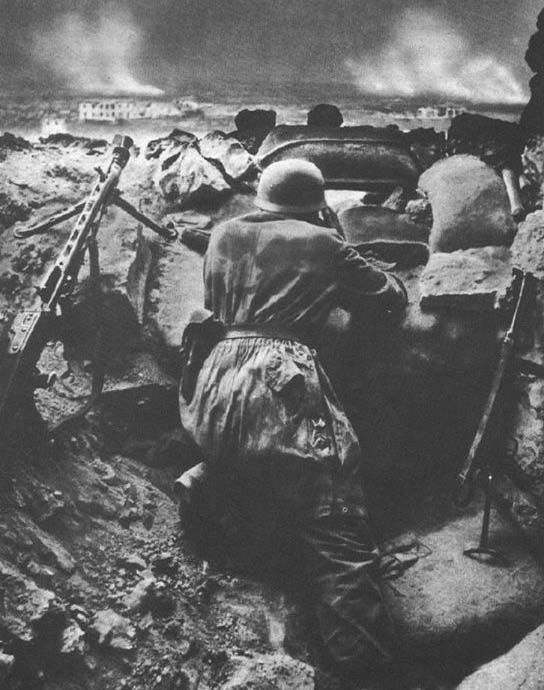 Germans had built up the defenses running south of Rome through months of effort, and manned it with personnel from fifteen divisions. The infamous monastery of Monte Cassino, soon to be home to the theater’s worst bloodbath, was there as well.

Having reached its bulk in January 1944, it took Allies four great offensives and over four months of battering their heads on the German fortifications to break through the Gustav Line, and its auxiliary Senger Line. The four battles of Monte Cassino alone inflicted on the Allies nearly sixty thousand losses: the total butcher’s bill to breach the Gustav Line had well exceeded a hundred thousand.

The Allies stopped and took a deep breather when the Gustav Line fell. Surely, they had breached the toughest of the defense lines, had Kesselring’s dreaded 10th Army on the run, and had taken Rome into the bargain. Surely it would be easier now.

At first it did seem to be the case: the Allies in their advance northwards faced only lightly defended, hastily built defense lines, the work of a delaying action. Surely, it was proof: the German defense of Italy was failing. Trasimene Line had been tougher than the previous ones since Gustav: but by the start of July it too was pierced in various places, and the Allies were once again streaming north.

But Kesselring hadn’t quit yet. He had one more ace up his sleeve. All the months the Allies were stuck at Gustav, Caesar, Trasimene lines, using fifteen thousand labourers, the Germans built up their final redoubt.

Gotenstellung: the Gothic Line. A behemoth of thousands of concrete-reinforced bunkers, pillboxes and gun pits, 120.000 meters of barbed wire, miles of minefields and anti-tank ditches, constructed by tens of thousands of laborers and manned by the full might of Kesselring’s soldiers. 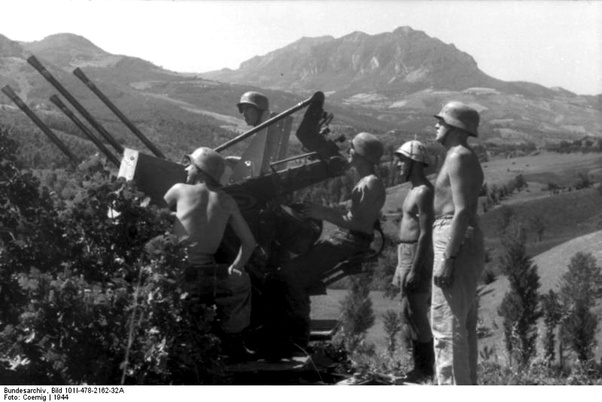 The Allies and the Axis clashed across the fortifications of the Gothic Line for months on end. In various places and times the Allies breached holes through the line, only to be met with immediate and vigorous counterattacks that forestalled any breakthrough.

By April 1945, the Allies still were stuck on the Gothic Line, which proved nearly unbreakable and resilient beyond imagination. Even cold concrete seemed bent on preventing passage. But the Gothic Line could not fight on its own, and the troops that defended it were melting. They were now outnumbered three to one, outgunned to an immense degree. Many of the rail lines south to Italy had been bombed to ruins, many passes and bridges lost to air attack, and as the borders of the Reich itself were breached, they were becoming gradually ignored by the German command. The Italians and Germans manning the Gothic Line had been increasingly bereft of arms, ammunition, heavy weapons, and any tangible resupply for nearly a month by that point. 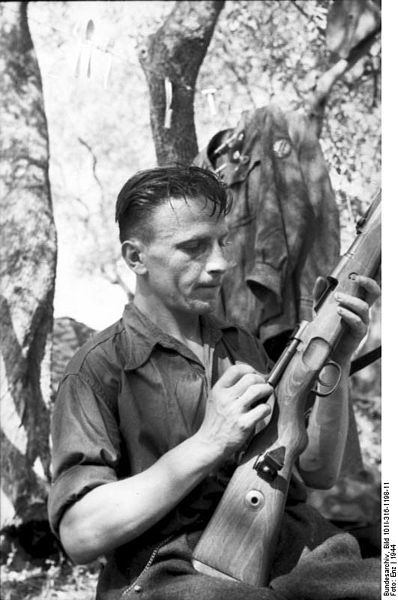 Late 1944: an Italian soldier at the Gothic Line. Even though Italy had switched sides not long after the Allied invasion, in German-controlled North, many Italians remained loyal to their former allies. By April 1945, they were making up one in four men among the Gothic Line defenders.

The Allies started the next phase of combat at the start of April: a wave of preparatory attacks were followed by the main offensive starting at 6 April. Already stretched to the brink, the defenders of the Gothic Line fought, hard, for nearly three weeks: then the German defense, finally, and for the first time since the war in Italy began, truly snapped.

The Allies had won in Italy, but at a terrible cost. More than three hundred thousand personnel, excess of eight thousand aircraft, and near four thousand armored fighting vehicles were lost in one and a half years since the Volturno Line. Kesselring’s defenders had tied down forces far greater than themselves, courtesy of the Allies choosing perhaps the worst piece of Axis Europe to invade. Let alone giving the Allies any strategic advantage, it had given Germans said advantage: the luxury of tying down very formidable forces with relatively little effort on their behalf. By the endgame, even as the Reich came crashing down around them, the Germans were tying down what was grown to nearly one and a half million personnel in Italy with maybe a third of that number.

And instead of Churchill’s dreams of racing up the ‘soft belly of Europe’ and striking Germany itself from underneath, it took the Allied forces until 2 May 1945, merely six days before Germany’s complete surrender, to simply wrap up the Italian campaign, let alone being in any position to break out into anywhere. And it was not that they were in a particularly good position either: if it were not Germany’s total collapse, for the next step the Allies would have to cross either the Italian Alps, now undoubtedly fortified thoroughly, or hedge their bets through the more open terrain of the Ljubljana Gap, a narrow area that would again prevent the Allies from bringing heavy numerical superiority to bear and leave them open to all forms of flanking attacks as they breached the Gap. And in either case, they would still be a very long way from anywhere critical for the German war effort.

Many historians say that the invasion of Italy would not give the Allies any advantage, because history showed it did not. The Allies came for the soft belly of Europe, and found a tough old gut: a nightmare of mountains and concrete and machine guns.
Posted by arclein at 12:00 AM