Making New Drugs With a Dose of Artificial Intelligence 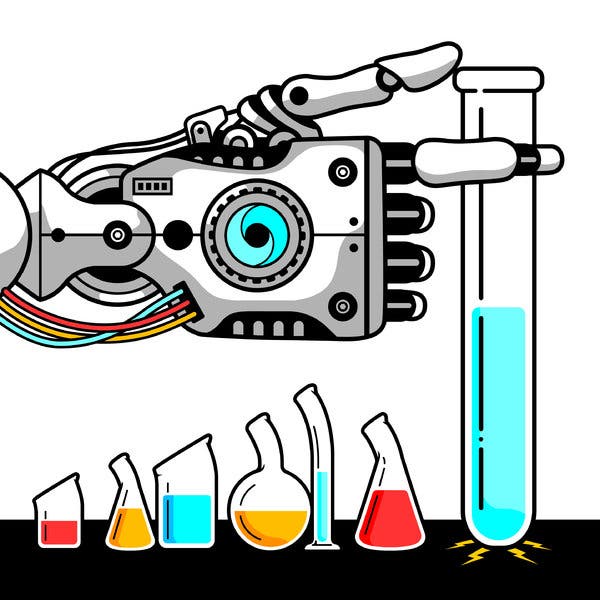 The take home is that AI is able to enhance the discovery rate in what can be described as a data rich environment.  To be expected of course and even if the improvement is not close to comprehensive, it is still a serious step forward.

We only have a finite number of phama research teams and picking options matters there.

There is still nothing better than a million informed eyeballs.  You have a chance of overcoming training.

.
Making New Drugs With a Dose of Artificial Intelligence

SAN FRANCISCO — You can think of it as a World Cup of biochemical research.

Every two years, hundreds of scientists enter a global competition. Tackling a biological puzzle they call “the protein folding problem,” they try to predict the three-dimensional shape of proteins in the human body. No one knows how to solve the problem. Even the winners only chip away at it. But a solution could streamline the way scientists create new medicines and fight disease.

Mohammed AlQuraishi, a biologist who has dedicated his career to this kind of research, flew in early December to Cancun, Mexico, where academics were gathering to discuss the results of the latest contest. As he checked into his hotel, a five-star resort on the Caribbean, he was consumed by melancholy.

The contest, the Critical Assessment of Structure Prediction, was not won by academics. It was won by DeepMind, the artificial intelligence lab owned by Google’s parent company.

“I was surprised and deflated,” said Dr. AlQuraishi, a researcher at Harvard Medical School. “They were way out in front of everyone else.”

DeepMind specializes in “deep learning,” a type of artificial intelligence that is rapidly changing drug discovery science. A growing number of companies are applying similar methods to other parts of the long, enormously complex process that produces new medicines. These A.I. techniques can speed up many aspects of drug discovery and, in some cases, perform tasks typically handled by scientists.

“It is not that machines are going to replace chemists,” said Derek Lowe, a longtime drug discovery researcher and the author of In the Pipeline, a widely read blog dedicated to drug discovery. “It’s that the chemists who use machines will replace those that don’t.”

After the conference in Cancun, Dr. AlQuraishi described his experience in a blog post. The melancholy he felt after losing to DeepMind gave way to what he called “a more rational assessment of the value of scientific progress.”

But he strongly criticized big pharmaceutical companies like Merck and Novartis, as well as his academic community, for not keeping pace.

“The smartest and most ambitious researchers wanting to work on protein structure will look to DeepMind for opportunities instead of Merck or Novartis,” he wrote. “This fact should send chills down the spines of pharma executives, but it won’t, because they’re clueless, rudderless, and asleep at the helm.”

The big pharma companies see the situation differently. Though Merck is not exploring protein folding because its researchers believe its potential impact would be years away, it is applying deep learning to other aspects of its drug discovery process.

“We have to connect so many other dots,” said Juan Alvarez, associate vice president of computational and structural chemistry at Merck.

In the spring of 2016, after making headlines with A.I. systems that played complex games like the ancient board game Go, DeepMind researchers were looking for new challenges. So they held a “hackathon” at company headquarters in London.

Working with two other computer scientists, the DeepMind researcher Rich Evans homed in on protein folding. They found a game that simulated this scientific task. They built a system that learned to play the game on its own, and the results were promising enough for DeepMind to greenlight a full-time research project.

The protein folding problem asks a straightforward question: Can you predict the physical structure of a protein — its shape in three dimensions?

If scientists can predict a protein’s shape, they can better determine how other molecules will “bind” to it — attach to it, physically — and that is one way drugs are developed. A drug binds to particular proteins in your body and changes their behavior.

In the latest contest, DeepMind made these predictions using “neural networks,” complex mathematical systems that can learn tasks by analyzing vast amounts of data. By analyzing thousands of proteins, a neural network can learn to predict the shape of others.


This is the same deep learning technology that recognizes faces in the photos you post to Facebook. Over the past decade, the technology has reinvented a wide range of internet services, consumer products, robotic devices and other areas of scientific research.

Many of the academics who competed used methods that were similar to what DeepMind was doing. But DeepMind won the competition by a sizable margin — it improved the prediction accuracy nearly twice as much as experts expected from the contest winner.

DeepMind’s victory showed how the future of biochemical research will increasingly be driven by machines and the people who oversee those machines.

This kind of A.I. research benefits from enormous amounts of computing power, and DeepMind can lean on the massive computer data centers that underpin Google. The lab also employs many of the world’s top A.I. researchers, who know how to get the most out of this hardware.

“It allows us to be much more creative, to try many more ideas, often in parallel,” said Demis Hassabis, the chief executive and a co-founder of DeepMind, which Google acquired for a reported $650 million in 2014.

Universities and big pharmaceutical companies are unlikely to match those resources. But thanks to cloud computing services offered by Google and other tech giants, the price of computing power continues to drop. Dr. AlQuraishi urged the life-sciences community to shift more attention toward the kind of A.I. work practiced by DeepMind.

Some researchers are already moving in that direction. Many start-ups, like Atomwise in San Francisco and Recursion in Salt Lake City, are using the same artificial intelligence techniques to accelerate other aspects of drug discovery. Recursion, for instance, uses neural networks and other methods to analyze images of cells and learn how new drugs affect these cells.

The big pharma companies are also beginning to explore these methods, sometimes in partnership with start-ups.

“Everyone is trending up in this area,” said Jeremy Jenkins, the head of data science for chemical biology and therapeutics at Novartis. “It is like turning a big ship, and I think these methods will eventually scale to the size of our entire company.”

Mr. Hassabis said DeepMind was committed to solving the protein folding problem. But many experts said that even if it was solved, more work was needed before doctors and patients benefited in any practical way.

“This is a first step,” said David Baker, the director of the Institute for Protein Design at the University of Washington. “There are so many other steps still to go.”

As they work to better understand the proteins in the body, for instance, scientists must also create new proteins that can serve as drug candidates. Dr. Baker now believes that creating proteins is more important to drug discovery than the “folding” methods being explored, and this task, he said, is not as well suited to DeepMind-style A.I.

DeepMind researchers focus on games and contests because they can show a clear improvement in artificial intelligence. But it is not clear how that approach translates to many tasks.

“Because of the complexity of drug discovery, we need a wide variety of tools,” Dr. Alvarez said. “There is no one-size-fits-all answer.”