Chased Through the Woods 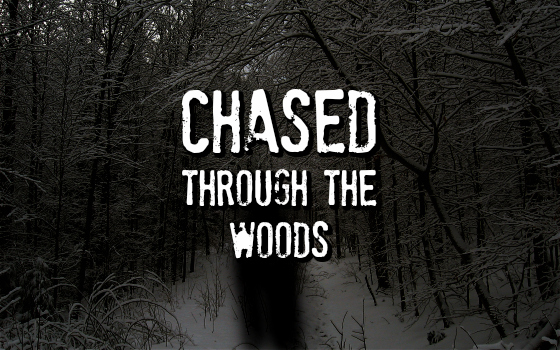 Another Giant Sloth and real confirmation that they are lousy runners.  This time the animal is close by, but cannot be seen.  Once again we have confirmation of this particular stalking power.

The creature is also known to the residents as well. I presume they leave each other alone.

Certainly this is the creature's home turf.

Chased Through the Woods

Last Monday (Feb. 4th), I went on a walk into the woods. I usually go all the time, whether it’s spring or winter. A bit of information: I live near Lake Ontario (in New York), there’s lots of state land and forests go on for miles. I live in the middle of nowhere, so I can walk into the woods and keep walking for hours. Because I go on walks, jogs, and play soccer, I’d say I’m fairly athletic. I’m an 18 year old girl, I’m not very tall, and I don’t weigh much, so I’m a pretty fast runner too. That’s an important later.

Sometimes it can get really creepy out there in the woods. You feel watched, and really tense. My mom and grandparents (they live right down the road) always told me that if I start to feel unsafe out there, I ALWAYS need to leave. They never said why, I always figured they were afraid of the Coywolves, it never seemed that important. I did listen to them though, I always went back home.

So Monday afternoon, maybe a bit past four o’clock, I left to go walking. I had been out there just two days before with no problems. But after walking for about half a mile, the feeling that I was being watched began. I was unsettled, but I stupidly thought to myself, “You’re 18 years old, you have a seven-inch knife on your belt, and the house really isn’t THAT far away. What are you so afraid of?” It was stupid, I should’ve gone home.

Anyways, I kept walking (maybe 1/4 mile) until I came to the old logging road. It makes for a quick way around the woods, it also connects to the road that my house and my grandparent’s house are on. I was getting pretty tired of hiking through the snow-covered bushes and logs, I kept falling through and it was making me feel a bit too vulnerable to be openly struggling when I still felt like something was watching me. And just a few moments before I could’ve sworn I saw something moving around in my peripheral vision, so I decided to walk down the logging road instead. As I was walking down it, I heard the sound of chains rattling nearby and started looking around for them, thinking maybe it was just chains in a tree blowing in the wind. It’s not uncommon for hunters and ATVers to leave chains, ropes, and random garbage along the path. Still, I couldn’t find any chains and I stopped hearing it after a second. I shrugged it off. But just a few minutes later I heard them again. It was weird, but I ignored it again. I kept walking and was getting close to my grandparent’s land when I heard the chains again, I stopped walking to look around me and check to see if maybe it was something I was wearing: my jacket, my necklace, it wasn’t anything on me. I jumped around to double check and probably looked really stupid, but I knew it wasn’t me making the noise.

I decided I’d just go to my grandparent’s house and walk back using the actual road, but as soon as I starting heading into the woods I heard something. It sounded like my footsteps had been in-time with a second pair that were maybe ten feet away, which made no sense because there had been nothing there just a moment ago. I took another step and heard something step at the same time from behind me. I didn’t turn around, I was too afraid to. (It’s probably a good thing I didn’t.) So I acted as if I was going to take a step forward, but stopped my foot right above the snow. I wanted to make sure I wasn’t going crazy. Behind me, whatever there was there stepped down. I heard the snow crunch, then it moved forward again quickly, it must’ve known I’d figured out it was there, I started running towards my grandparent’s land and whatever was behind me followed. It sounded human-like, and the sound of the chains started up again when it started chasing me. The thing definitely had only two legs and it sounded pretty big.

There’s a lot of thorn bushes, small trees, and things that stay around all year, even in the winter. While I ran around/between them as best I could, it was just going right through them. I glanced behind me for a second and all I saw was a REALLY tall, grey, humanoid blur before I looked back in front of me. Timing wasn’t on my side, like I said, it was the late afternoon and the sun was getting low. So it was getting a little dark under the trees, I was running through the thorn bushes at this point because I knew it was getting too close to me and there were just too many thorns to try going around them all. I was slowed down by them by a bit and was sure it was going to catch me, but it never did. I’m not sure if maybe it just didn’t care to for some reason (maybe trying to scare me away?) or I was still going fast enough that it couldn’t catch me. I burst through the final line of bushes and out onto the cleared up edge of my grandparent’s yard, then up the hill and to the house. That final stretch was TERRIFYING, I could hear heavy breathing and chains rattling just a few feet behind me the entire time and it sounded like it was almost growling. My grandparent’s dog (a very big Malamute-Mastiff mix) was up in the yard near the house and started barking, but he didn’t run towards me, he just stayed by the house barking. Then he ran with me to the house when I got close to him. I ran up to the door and went inside (The dog came in right beside me.) and slammed the door shut.

I didn’t hear anything and looked out the window, but there wasn’t anything there. The dog was leaning on me and shaking, I was too, so I understood how he felt, we were both really scared by that thing. My grandfather came to the door from upstairs after just a few seconds and I started crying and told him everything after I’d calmed down and could breath again. He became very serious and told me, “Don’t think about it, just forget it ever happened.” I tried to ask him why, but he refused to tell me anything, he just insisted that I forget immediately and keep it out of mind, but I can’t forget. I tried asking my grandmother too, but she didn’t say anything and changed the subject. My dad thinks it was a bear, I KNOW it wasn’t. For one thing, you can’t outrun bears. My mom acted the same way as my grandparents (they’re her parents). They refuse to answer any of my questions, so I told a close friend about it the other day. She didn’t know what it was either. HN
Posted by arclein at 12:00 AM