How we discovered that Europeans used cattle 8,000 years ago 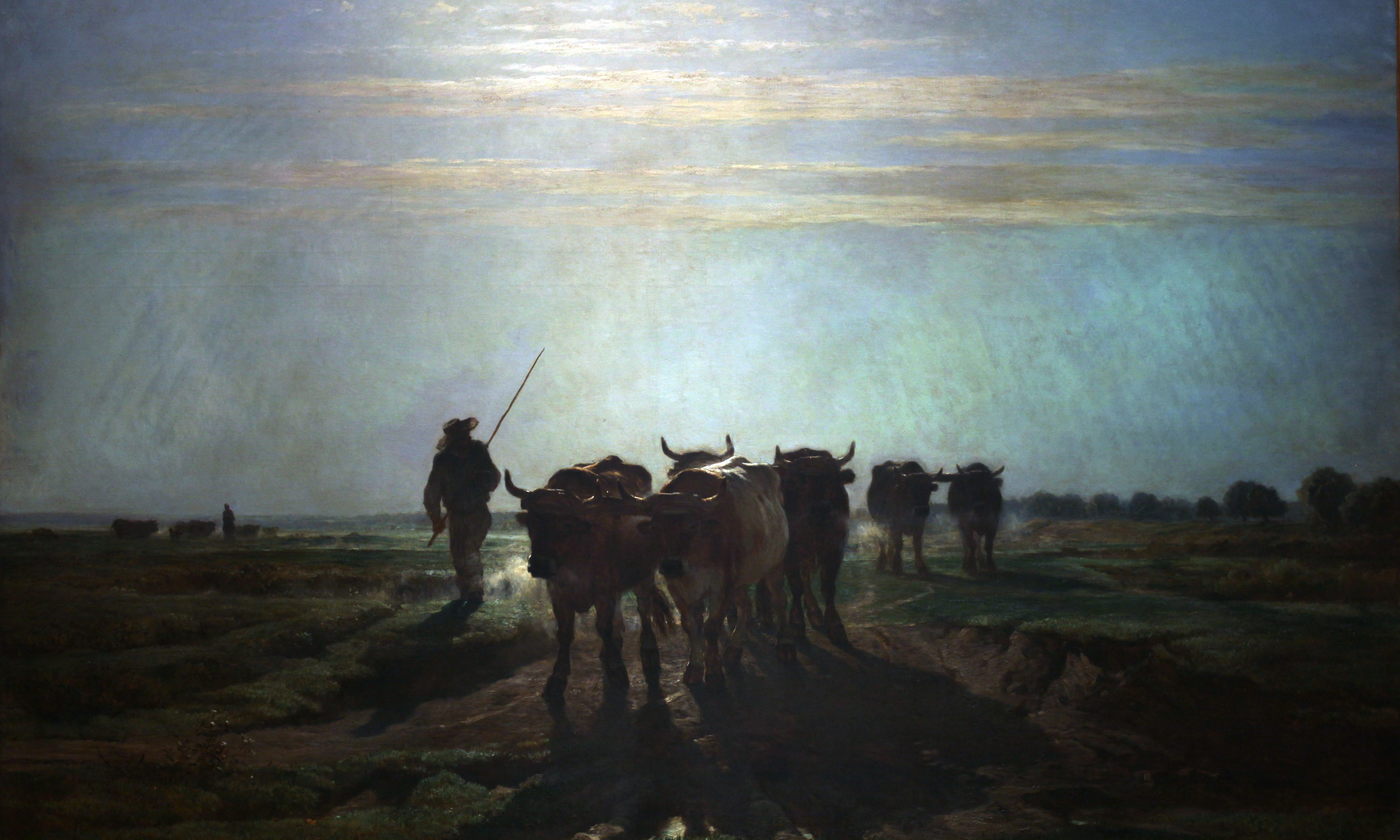 It is one thing to suspect as much and much better to know as much. We now know for sure that cattle traction is at least 8,000 years old.  This is very important as it certainly predates any developed grain culture which likely arrived in Europe around 6,000 years ago.
We have already understood the real power of one cow per family.  That is sufficient to actually sustain the family through an entire year by way of cheese and butter along with a potential meat harvest as well converted into dried jerky.  All this seen within a natural community provides a high quality of food security through the winter even without much in the way of grain in particular.
Now understand just how valuable this animal becomes when you are clearing a new forest field.  You girdle the trees with stone axes in order to kill them and to let them dry out to some degree.  Then perhaps the next spring. you drop the trees and hack off the branches.  Cattle allow you to drag all the heavy branches away.  They then allow you to even move the resultant log itself to your building site.  Log cabins have always been a natural option in heavy forests.  Cattle allow you  to actually build them effectively without using human gangs merely to lift a smallish log.

All this took place before anyone got too serious about making up a large plowed field.
.
How we discovered that Europeans used cattle 8,000 years ago

is a research associate in the Institute of Archaeology at University College London. Her work has appeared in Antiquity and the Journal of Archaeological Science, among others.

Haskel Greenfield  is distinguished professor in the Department of Archaeology at the University of Manitoba in Canada. He is the editor of Animal Secondary Products: Domestic Animal Exploitation in Prehistoric Europe, the Near East and the Far East (2014). He lives in Winnipeg.


Marc Vander Linden is a temporary lecturer in the Department of Archaeology and Anthropology at the University of Cambridge. He co-edited Investigating Archaeological Cultures: Material Culture, Variability, and Transmission (2011) with Benjamin W Roberts.

Oxen on their way to work by Constant Troyon, Barbizon school, 1855. Courtesy Wikimedia


The use of animals for their renewable products greatly increased human capabilities in prehistory. Secondary products – or anything that can be gleaned from a domestic animal repeatedly over its lifetime – expanded the capabilities of ancient human societies. They helped to provide enough food and labour surplus to make possible the first ancient civilisations. Apart from their meat, bones and skin, animals gave ancient people vital goods such as their milk and wool. The ability to repeatedly harvest milk from an animal over its lifetime more than doubled the calories that it could contribute to the human diet. The ability to harvest wool from sheep allowed humans to grow a source of meat as well as warm and durable clothing. At some point in prehistory, humans learned that domesticated cattle could pull burdens far greater than humans alone could manage.

Even after decades of archaeological research, the specific origins of these developments in the management of domesticated animals are not well understood. Studies of the patterns of slaughter of domestic animals according to their age and sex, combined with chemical analyses of the residues left inside ancient pottery vessels, suggest that the consumption of dairy products from sheep, goats and cattle likely dates back into the Neolithic period – at least 8,000 years ago in Europe (c6000 BCE) and earlier in the Near East. The origins of woolly sheep are less well-known. Wild sheep do not have woolly coats, which developed at some point following their domestication. Very few examples of preserved woollen textiles survive for millennia, so the exact date of their production from sheep remains difficult to establish. However, studies of the management of domesticated sheep in prehistory and of artefacts used in the spinning and weaving of textiles suggest that wool was developed in some regions (such as the Near East) by at least 5,000 or 6,000 years ago.

The precise origins of cattle as engines of labour – known as traction – is also murky. In the past, investigators traditionally looked for evidence of items pulled – primarily (but not only) wagons and ploughs. Wagons – known from preserved images such as figurines and rock art – have existed for more than 5,000 years. Early ploughs, such as the ard or scratch plough, were made of wood, and do not preserve well over thousands of years. The oldest known evidence of ploughs in Europe comes from fragments of ards preserved in water-logged ancient sites. They are just under 6,000 years old. Though not nearly as effective as modern machines, early ploughs would have been far faster and easier than having to break compacted earth in fields with hand tools in order to plant crops. They allowed people to plant more crops using less labour, increasing the amount of food that could be grown each year.


The effort of repeatedly pulling heavy loads causes the medial (or interior, closer to the centre of the body) surfaces of footbones to grow larger; it produces a larger surface area over which to bear the repeated strain. For the past 30 years, scientists have analysed such changes to cattle footbones from European archaeological sites dating to 6,000 years ago or later. We have learned that people used cattle as engines from almost 6,000 years ago, the time of the oldest known ploughs. These uses of secondary products from some 6,000 years ago must have radically changed the capabilities of ancient societies.

However, we still do not know how ancient was the invention of cattle as traction engines. In a recent study in the journal Antiquity, we challenged the 4th-millennium dating (6,000 years ago) of the earliest known use of cattle engines in Europe. We studied the footbones of cattle from 11 sites in the western Balkans (modern-day Croatia, Serbia and Bosnia-Herzegovina) dating to the local Neolithic, and ranging from 6100 BCE to 4500 BCE (8,000 to 6,500 years ago). Across these sites, cattle footbones were compared with the same bones from wild cattle at these sites, to determine the presence and absence of footbone alterations indicative of the strain of traction.

We found changes to the footbones of cattle consistent with traction across these sites that were completely absent from the control group of wild cattle footbones. The presence of these pathologies, and their absence from the control population of wild cattle hunted at these same sites, proves that humans were using cattle as engines of labour in Europe at least 2,000 years earlier than was previously thought. Furthermore, comparisons of sex-specific proportions from some of these footbones showed that humans were using both male and female cattle. In fact, female cows were more common as animal engines than male bulls.

Our research shows that early farmers moving into and across Europe had a far more advanced system of resource management than we knew. Not only were the earliest European farming societies already making use of livestock for dairy products, they were able to train their cattle as labour engines to haul goods, building materials, etc. The ability to use cattle as engines of labour would have greatly increased human capabilities for the transport of heavy objects. The advance bears profound implications for how we understand the organisation of labour in these ancient societies.

In the spread of the Neolithic farming communities through central Europe, the use of cattle to clear forested areas would have decreased the human labour necessary to convert areas for cultivation. For moving heavy items, one cow would replace multiple humans. Previous reconstructions for building projects in prehistory have generally presumed that an increase in societal complexity would be necessary in order to corral the labour of a large number of people to work on a large communal task. Estimates for the amount of labour required to build structures and monuments in the past are generally calculated as the number of person-hours or person-days required.

In other words, structures such as wooden longhouses of the central European Linearbandkeramik or Linear Pottery Culture (c5500 BCE) or monuments such as Stonehenge (c3100 BCE) all use estimates based upon how much one person can build or carry in a day. The potential availability of animal engines changes these calculations, and they need to be reconsidered. The advent of using cattle as traction engines also remains unknown. Our research suggests that they were already doing so 8,000 years ago. We must look farther back into the past to so see just how advanced ancient farmers were, to discover, when they domesticated cattle, and to learn more about the origins of human civilisation.