Visitors From the Ocean’s Twilight Zone 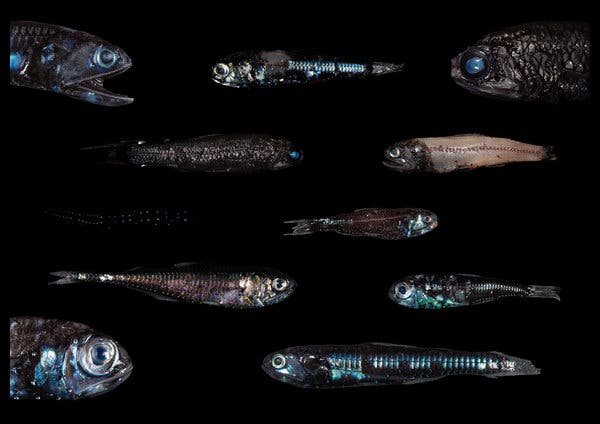 I am surprised how little is actually understood.  We do not even understand the biomass scale. Rather important do you not think.  Is it actually continuous?  Seems unlikely.  It is all a natural target for fertilization as well and may connect the dots between Ocean Gyres and Salmon spawns.   That is a lot of located food for a migrater.

This all needs to be much better understood.  Why is it suddenly interesting?   It certainly solves the food problem the same way insects do on land.  Like insects in size, it naturally sweeps the entire water column to the limit of actual light penetration.

Visitors From the Ocean’s Twilight Zone

Researchers recently hauled up specimens from a layer of the world’s seas that contains an abundance of aquatic life.


Between the ocean’s bright blue surface and its blackest depths — 660 to 3,300 feet below — is a mysterious, dark span of water. Welcome to the twilight zone.
Recent evidence suggests there are more animals here by weight than in all of the world’s fisheries combined. But who lives here, and in what quantities?

Since August, a group of scientists has been using new technology to better understand the twilight zone’s strange inhabitants. They hope their findings will lead to a more sustainable approach before the fishing industry tries to harvest some of its abundant life as fisheries closer to the surface are diminished.

“The time is right to get this knowledge before it’s too late,” said Heidi Sosik, a biologist at the Woods Hole Oceanographic Institution who is leading The Ocean Twilight Zone project. “This twilight zone region of the ocean is really, very barely explored, but the more we learn, the more interesting and more important it seems to be in playing a role in the whole ecosystem.”

Below are highlights of what they hauled up on their first cruise.

A variety of myctophids, or lantern fish. The twilight zone contains about 250 different species of myctophids

Each animal in the ocean has its own auditory signature that ships usually detect by sending out sound waves that bounce or scatter off their bodies. It’s how whale watching cruises often find humpbacks for you to view.

But the acoustic fingerprints of twilight zone animals are still mysterious because shipboard sonar don’t have the bandwidth to distinguish the many organisms living far below the surface in what’s called the deep scattering layer. It’s an area so dense with life that people once thought it was the seafloor.

Around 250 different species of myctophids, or lantern fish, like the specimens above, make up much of this dense layer. Though abundant enough to trick sonar, individually they are no bigger than your index finger.

During a 10-day expedition in the Atlantic, the team towed an instrument called Deep-See from the Henry B. Bigelow, a ship from the National Oceanic and Atmospheric Administration. Inside that deep layer, it detected a range of frequencies that the scientists hope to match with pictures and DNA to create a kind of auditory dictionary of twilight zone inhabitants.

“Acoustics is the most powerful tool to do this, but in order to do so you need to know how these organisms scatter sound,” said Andone Lavery, who led development of the Deep-See instrument.

They collected organisms in trawl nets, on the final day attaching a small aquarium to the back of one net that kept most of the organisms they photographed on the ship alive and in good shape.

The common bristlemouth is the most abundant vertebrate on the planet.

“Some of them look like crazy monsters,” Dr. Sosik said — like the glowing, elongated one above.
But she pointed out that, “most of the animals that live in the twilight zone are really small.”

This size adaptation is key here where food is scarce, because small things don’t need as much of it. 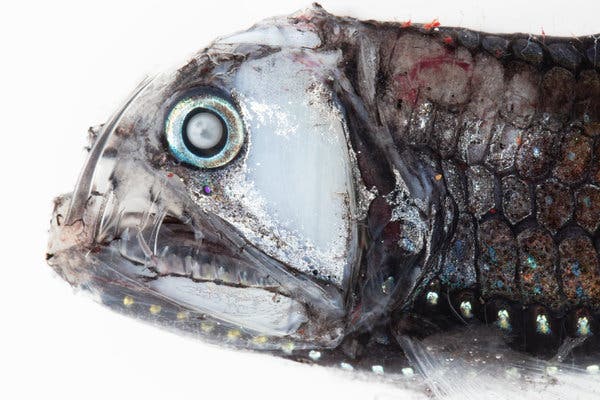 “This guy would be considered one of the big, bad predators down there,” said Paul Caiger, a biologist at Woods Hole and the cruise photographer.

It has one of the biggest teeth-to-body-size ratios in the animal kingdom. Its teeth are too large for its mouth to accommodate, so it just closes them like a cage, imprisoning its prey before it eats.
“These fish might not see prey for a few days, and when they see something, they don’t want to lose it,” he said.


An example of counter-illumination.
The belly of a hatchetfish contains light organs or photophores. Many animals down here make their own light through a chemical reaction inside photophores of various shapes, sizes and arrangements.
By turning on these lights and regulating their intensity, hatchet fish blend in with light flowing down from the surface, becoming invisible to predators looking up for silhouettes from below.

This hiding technique, called counter-illumination, is the most common use of bioluminescence in the twilight zone.

Animals like the hatchetfish also use their bodies as mirrors to hide, or even make themselves transparent.

Things that go bump in the twilight zone

For sensing a dimly-lit environment, animals like this lantern fish may turn their eyes into giant lenses for low light.

Or like the common fangtooth, below on the right, they opt for other senses.

“It relies on kind of just bumping into things in the middle of the night,” Dr. Caiger said.

That ridge along its body’s length has pressure sensors that can detect objects, current or animals moving in the water a few body lengths away. Up close, a mucus coating enhances the fish’s ability to detect chemicals around it.


And that isn’t even the weirdest adaptation

When the Navy started using active acoustics to monitor the sea in the 1930s, they noticed lots of sound bouncing off a layer they thought was the bottom. But its depth changed from night to day.

This “false bottom” turned out to be a traveling mass of animals that journey hundreds to thousands of feet from the depths to the surface each night in a living wave that wraps around the planet.

During the day, surface dwellers like sharks, tunas and swordfish dive down to to the depths to eat, recent evidence has found.

Scientists working to untangle this multilayered food chain think it may play a major role in regulating climate by keeping carbon in the ocean. And that’s part of why it’s so important to study these watery depths that we ordinarily cannot see.

“If you imagined erasing the life in the twilight zone, it wouldn’t affect just that layer. It would affect the ocean and the whole planet,” Dr. Sosik said. “It’s also just amazingly interesting, and you can’t look away.” 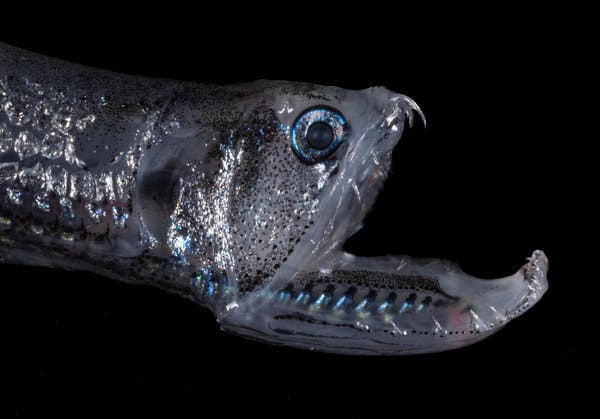