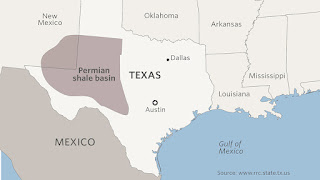 
Look at the size of the Permian Shale Basin. It has been totally liberated by the advent of horizontal drilling  which can tap individual zones over what is thousands of feet of productive potential.
The industry mastered the technology in North Dakota in the huge Williston Shale and it looks like they are sustaining production there as well.
This is why the USA has rotated back into the world's largest oil producer. It is also why peak oil is now far on the horizon.  All that left behind oil has become at least prospective.
.
Texas Sets New Record for Oil Production

If Texas were a country it would be the fourth largest oil producer after the USA, Saudi Arabia and Russia. Texas passed Iraq and Iran in oil production.

There has been some talk about the US stopping oil and gas production. If such an energy policy were attempted, it is clear that Texas would secede from the USA to continue producing oil and gas.

The oil and gas independent producers drive the energy economy directly benefiting Texas and its residents. Between 2010 – 2018, total state taxes and state royalty payments paid by the oil and gas industry in Texas exceeded $100 billion. These funds have continued to support all aspects of the state economy, including schools and education, infrastructure investment, water conservation programs and first responders, to name a few. Additionally, Texas is home to approximately 2.5 million mineral owners, of the 12.5 million mineral owners in the U.S., with oil and gas royalties generating billions of dollars for Texas families last year.