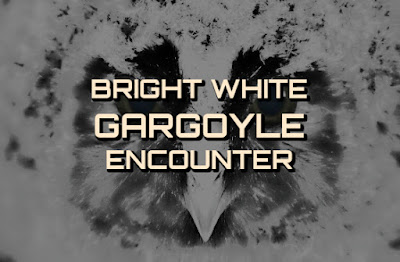 An amazing report.  It is a gargoyle, but not until a lot of cover and misdirection is thrashed through.  This is the first indication on what is behind the thousands of sightings of light orbs.  Gargoyle sightings are rare but light orbs are not and they are also associated with cattle mutilation which is certainly associated with gargoyles.

We are actually close to unraveling this whole phenomena.  It appears that the creature uses the inner sun to produce distracting orbs of light and even floods its own body as well.

I think that it is likely the only creature to do so, at least to any great extent.  We already understand that several larger intelligent creatures are able to make themselves unseeable and project mind images.  This capability is getting fleshed out..

Bill in Madisonville, Tennessee called in to tell of an encounter he had:

“I’ve had a few experiences in my life. This is one of the ones that stood out. We pulled up to a friend of mine's house and we were sitting there waiting for him to come home and all these balls of light that I call orbs were coming out of everything, you know, like fireflies but smaller than baseballs.

So I watched to make sure they weren't just regular lights. And they were going in behind trees, coming out from behind the trees and coming back around and everything, they'd flutter around.

My friend, he was really panicking. I said, 'I'm not leaving until you tell me what you see' because I was kind of a skeptic myself. I don't scare very easily. He said, 'There's balls of light around here, you know, we've got to leave right now.' And I still refused to leave.

Well, after maybe 15 seconds elapsed, there was this thing that flew up and I guess, for lack of a better term, ghostly looking thing with a wingspan of possibly five feet or six feet across – a very short neck and the head of an owl, maybe, you know, like a horned owl? And you could see it. It was just a white thing but just as bright as the orbs. (Clyde Lewis noted that it sounded like he saw a gargoyle) That's what my friend told me after, that it was a gargoyle. It landed in a tree and tucked its wings. This thing in the tree, it tucked its wings and looked at us. By then, my friend, sitting next to me, has just lost his mind and he actually pulled out a knife and said that if I don't leave, he is going to stab me. It was scary. He scared me worst than the things we were seeing. And I came back later and told my friend about it and he told me, he just laughed, he said, 'you know what, you're the second person in the past twenty years that has seen that'.”
Posted by arclein at 12:00 AM