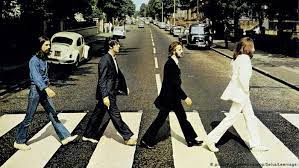 Yes, i was a teenage fan of the beatles.  I first heard of them in 1963 when their english fame was observed on the CBC farm show no less.  Then in the rainy fall of 1967 university of waterloo campus, I treked to the other side of Kitchener to the Mall to get a copy of the white album to play on my cheap turn table.  It soon became the residence floor favorite.  I still have that well worn album.
I later bought another copy to retain as a collectable.  Not to be when my teenage daughter daughter popped it open and hung the poster on her wall.  she is also a devout trekkie.
Back then we totally understood that the beetles were exploring and applying innovastion to the whole pop music genre.  Yes they did it all first and what worked everyone else copied.  The rest of todays pop music is so much an echo of those days when their innovation spured all other musicians as well.  Everyone upped their game and took real risks.
I recall my teenagers shock when i got a copy of iron butterfly to play ena gadda da vida (i hope i spelled that right)   so much for the newness of heavy metal.
So here we welcome another fan and say thankyou to the inventors of the  modern pop music powerhouse.
The Beatles’ 8 Pioneering Innovations: A Video Essay Exploring How the Fab Four Changed Pop Music
in History, Music | August 18th, 2021 Leave a Comment
FacebookTwitterReddit
https://www.openculture.com/2021/08/the-beatles-8-pioneering-innovations.html?
<iframe width="626" height="406" src="https://www.youtube.com/embed/fy9a_ClKxqM" title="YouTube video player" frameborder="0" allow="accelerometer; autoplay; clipboard-write; encrypted-media; gyroscope; picture-in-picture" allowfullscreen></iframe>
In modern society, some facts are simply accepted: one plus one equals two, the Earth revolves around the Sun, and The Beatles are the greatest band in history. “So obviously dazzling was The Beatles’ achievement that few have questioned it,” writes Ian MacDonald in his study of the band Revolution in the Head. “Agreement on them is all but universal: they were far and away the best-ever pop group and their music enriched the lives of millions.” Today, just as half a century ago, most Beatles fans never rigorously examine the basis of the Fab Four’s stature in not just music but culture more broadly. Suffice it to say that no band has ever been as influential, and — more than likely — no band ever will be again.
To each new generation of Beatles fans, however, this very influence has made the band’s innovations more difficult to sense. For decade after decade, practically every major rock and pop band has performed in sports stadia and on international television, made use in the studio of guitar feedback and automatically double-tracked vocals, and shot music videos.
But the Beatles made all these now-common moves first, and others besides, as recounted in the video essay above, “8 Things The Beatles Pioneered.” Its creator David Bennett explains the musical, technological and cultural importance of all these strategies, which have since become so common that they’re seldom named among The Beatles’ many signature qualities.
<iframe width="626" height="406" src="https://www.youtube.com/embed/UEmSjDuTxyc" title="YouTube video player" frameborder="0" allow="accelerometer; autoplay; clipboard-write; encrypted-media; gyroscope; picture-in-picture" allowfullscreen></iframe>
Not absolutely everyone loves The Beatles, of course. But even those who don’t particularly enjoy their records must acknowledge their Shakespearean, even Biblical super-canonical status in popular music today. This can actually make it somewhat intimidating to approach the music of The Beatles, despite its very popularity, and especially for those of us who weren’t drawn to it growing up. I myself only recently listened through the Beatles canon, at the age of 35, an experience I’d deferred for so long knowing it would send me down an infinitely deep rabbit hole of associated reading. If you, too, consider yourself a candidate for late-onset Beatlemania, consider starting with the half-hour video just above, which tells the story of the band’s origins — and thus the origin, in a sense, of the pop culture that still surrounds us.
Related Content:
How “Strawberry Fields Forever” Contains “the Craziest Edit” in Beatles History
Hear the Beautiful Isolated Vocal Harmonies from the Beatles’ “Something”
Is “Rain” the Perfect Beatles Song?: A New Video Explores the Radical Innovations of the 1966 B-Side
A Virtual Tour of Every Place Referenced in The Beatles’ Lyrics: In 12 Minutes, Travel 25,000 Miles Across England, France, Russia, India & the US
A 17-Hour Chronological Playlist of Beatles Songs: 338 Tracks Let You Hear the Musical Evolution of the Iconic Band
Based in Seoul, Colin Marshall writes and broadcasts on cities, language, and culture. His projects include the Substack newsletter Books on Cities, the book The Stateless City: a Walk through 21st-Century Los Angeles and the video series The City in Cinema. Follow him on Twitter at @colinmarshall or on Facebook.
Posted by arclein at 12:00 AM