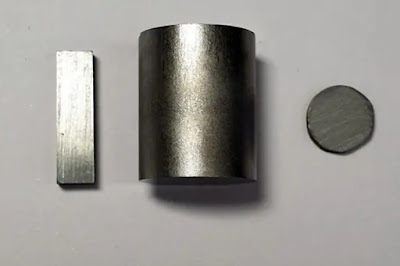 This is promising and is one of our key techno problems. understand that most waste heat is easily collected into water at a temperature of around 100 celsius.  This produces a need to disipate heat down to ambient temperature.
The reverse Rankin cycle actually does this except it is an engineering solution that adds as much to the system as the original build.  Even when justified, it is way easier to simply dumpthe heat into the lake or ocean.
Now this promises tp strip heat using a simple enough protocol that does not impact too much

Engineers at Northwestern University have developed a new thermoelectric material that may be the most efficient one yet. The new and improved polycrystalline form of purified tin selenide has all the right properties to make it a practical material for converting waste heat into electricity.


Thermoelectric systems generate electricity through a temperature gradient. Heating one side of a special material can cause electrons to start moving from the warmer side to the cooler side, generating an electric current in the process. It’s hoped that this technology could help recycle energy that’s otherwise being wasted as heat in electronics, power plants, engines, and even cookware.


To get the most out of this technology, thermoelectric materials need a few properties. They need to have a high electrical conductivity but low thermal conductivity, so that electrons can flow through easily while the heat stays on one side. They need to be able to efficiently produce electricity from the temperature gradient (known as the Seebeck coefficient), and ideally they should be able to withstand high temperature.

All of these properties are weighed up against each other and expressed as a “figure of merit” or ZT. This number has gone from below 1 over a decade ago, to 2.2 in 2012, and more recently as high as 2.7. Now, the Northwestern research claims to have hit a record ZT of 3.1.


The key was a material called tin selenide, which the team had previously pushed to a ZT of 2.6 in its single-crystal form. However, this material is too fragile for mass production, so the researchers set out to make it in a polycrystalline form, which is stronger and easier to cut and shape as needed.

Unfortunately, when they began experimenting with this form, they found that the material had a high thermal conductivity, which cuts the thermoelectric effect. Closer inspection revealed that the culprit was a thin layer of oxidized tin forming on the surface. When they purified the starting materials and removed the layers that formed, they managed to boost the polycrystalline tin selenide to a ZT of 3.1.

The team hopes that this breakthrough could lead to better thermoelectric generators.


“This opens the door for new devices to be built from polycrystalline tin selenide pellets and their applications explored,” says Mercouri Kanatzidis, corresponding author of the study. “These devices have not caught on like solar cells, and there are significant challenges to making good ones. We are focusing on developing a material that would be low cost and high performance and propel thermoelectric devices into more widespread application.”

The research was published in the journal Nature Materials.
Posted by arclein at 12:00 AM