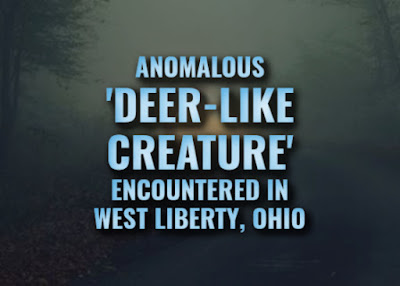 Again the easiest explanation is a Giant Sloth Projecting a deer image.  We have seen that before.  The Giant Sloth also explains the Wendigo.

The point is that these creatures have home territiries and cover all of North America.  they akso hunt us with impunity.

What we see are oddities such as a deer image and plenty of other rough images.  We are now seeing many reports and that is because they are now been collected.

Anomalous 'Deer-Like Creature' Encountered in West Liberty, Ohio
Monday, August 09, 2021
https://www.phantomsandmonsters.com/2021/08/anomalous-deer-like-creature.html?
An East Liberty, Ohio resident witnessed a deformed deer-like creature cross the road in front of them. They thought it was a Wendigo, though I believe it was something different.
The following account was recently forwarded to me:
In February or March 2018, I was driving home to East Liberty, Ohio.
I turned on the road to take me home at 3:30 AM - 4 AM. It was really cold and dark, hardly any other cars. I turned on OH-508 and as I was driving past South Union Mennonite Church I saw, what I believe is, a Wendigo crossing the road! I just found out what matched the description of what I saw online in photo illustrations.
It was shaking, going slow, I thought it was a deer that got hit by a car and injured. But what made this extremely different was that even before I stopped my car at a distance, I noticed the rest of the body, except the top of back, looked like bare white human skin! I stopped and saw it move in a hurry, but injured? Maybe into the field! Here's what's even more creepy. I thought, from a distance before I stopped, it was a deer standing up and wobbling. But this thing had legs. It was on all fours dragging its legs across the road, but was as tall as a deer on all fours.
Its back had black mangled fur. Its back was much wider and bigger than a deer. It had something like antlers, but they were much longer and thicker looking. Not a lot of points like a deer would have and its antlers points were going in weird directions, not just straight up like a regular white-tailed deer.
This thing is REAL, and it looks like what people call a Wendigo. I was going to back the car up and take a picture, but I was TERRIFIED and actually I went 70 mph across the railroad tracks. I freaked out the whole drive home, in disbelief. I've told my husband, but never talked about to anyone." AN 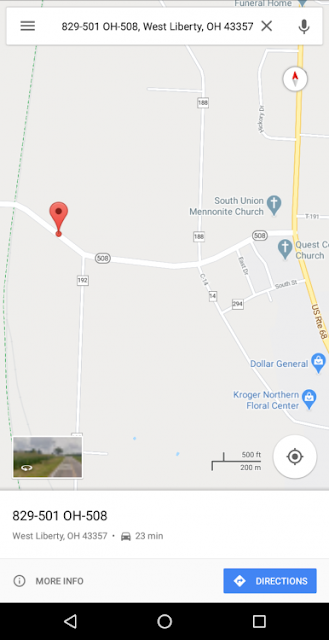 NOTE: I don't believe that this was a Wendigo. It was probably something more related to a 'Not Deer.' Wendigos are possessed humans who have a desire to kill and eat human flesh. In First Nations lore, they can transform into a deer-like entity, but I truly doubt that is what occurred here. Lon
Posted by arclein at 12:00 AM