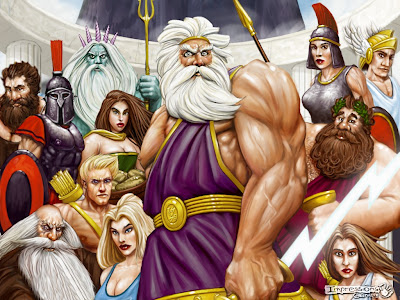 One of mymost read posts

This post of mine was done in 2011 and it formed around my then understanding that those Gods of old were augmented human beings who were then part of the Atlantean world that ran globally from at least 2400 BC through its destruction in 1159 BC twenty years after the Trojan War.  Pre global Atlantean development had to be at least another thousand years and realisticaly had cultural continuity back to the multiple global colonizations associated with Noah.  Antique civilizations typically had long life spans prior to the advent of truly mobile calvary and were all expansionary during their often thousands of years of existence.  This is the background behind the emergence of Atlantis.
1  A key characteristic of Atlantean civilization was the building of Pyrimids and the Great Pyramid in 2400 BC coincides with the full globalization of this polity using sea transport
2  Alphabets were deliberaterly created world wide during this polity.  Ours preserved sound and ultimately fixed  our spoken languages. That you can read the King Jamnes Bible and Shakesphere written at the same time demands training only and a century earlier chaucer is opaque.  Therafter we saw the true rise of english letters on to this day with real continuity of accepted language..
3  The chinese alphabet preserves knowledge free of sound values.  Thus information going back to the Yellow emperor is open to us.  A completely separate protocol and valuable to preserve TCM..
4  It is reasonable that all global civilizations were directly founded as trade factories by the Atlanteans in order to peddle copper from Lake Superior in particular around the time the Great Pyramid was built by their engineers.
What is important to understand is that they had well over a thousand years to advance their version of knowledge.  They also had access to technical reports regarding the establishment of the post flood world.  Noah's report is one of those.
I now have clear understanding of just how those Gods are created.  This is why I am revisting this post.
1  We already understand that these Greek Gods are all too human and certainly us in all our Bronze Age splendor.
2  We have not quite caught on to the fact that the purpose of spiritual training is to access the tools needed to allow ourselves to emerge as Gods or super humans of a sort.  We are still mortal but are able to live as long as we like on Earth before tripping back into the spirit world which is as physical as the one we live in but differnt and directly imagined.
3  The key tool is breaking through the inner eye in order to access the INNER SUN.  That is good enough to have all the powers exhibited by Jesus two thousand years ago.  I speak to this because i have experienced the full weight of that INNER SUN for a few moments during a meditation into the theta state.
4  all other aspects of meditation are helpful but not important.  After all we have cell phones to communicate with and that is way easier.  The purpose of meditation is to allow the other side to share with you what you need.  They will choose if you are ready for the INNER SUN.  Otherwise be grateful for this teaching.
5  We are on earth to learn and prepare for been a living EARTH God and otherwise to become an EARTH Angel.  Those Greek Gods of myth were EARTH Gods.


Without question Yesua accessed the INNER SUN and this allowed him all his miricles.  He clearly became an EARTH God
Understand if you flood your body with the radiation of the INNER SUN. you can first restore your body to prime age of about 32. This was the age of Jesus to then observers.  Once that is done, you can flow this energy to another to heal them easily.  Even Restore the recently dead.  It is both simple and powerful. The spectrum is narrow enough to access your own spirit body and fully recharge it without been dangerous but still disconcerting to experience..   This gets past the blocking effect of our physical bodies.  A fully charged spirit body quickly restores your physical body to prime.
Now you understand the true purpose of meditation.
And while we are at it, it is plausible that i could use this energy to form a drained ball of positive ions to then produce a lightening bolt as Zeus loved to do as an antique Big Man.
It also explains the obvious virility of the Greek Pantheon. Everyone is thirty two.
These Gods were never meant to rule but certainly to teach and to lead the willing and calling the Rule of Twelve prepare consensus.
Heaven on Earth will ultimately evolve into a human population of EARTH Gods and Goddesses who then live as long as they want in this third tier matter world.  They will no longer be as rough and ready as our Atlatean forerunners.  And we can be a lot better than we are today.  That happens to be the END GAME for TERRAFORMING TERRA.

This is a reasonably sane question to ask as we are now closing in on technical equivalence to our apparent progenitors.
As I have pieced together on this blog. A number of clear conjectures may be spelled out:
1                    Mankind’s progenitors arose to modern technical proficiency around 40,000 years ago.  They operated on the global continental shelf where the climate was generally moderated by the sea.
2                    They explored the solar system using MFEVs or UFOs and established a system of space habitats to move their population into.
3                    After fully vacating Earth, they caused a comet to impact on the North Polar Ice Cap in order to induce a crustal shift that explicitly placed the Caribbean into the tropics and powered the  as a heat engine able to end the Ice Age. This event took place 12,900 years ago.
4                    These progenitors were not Gods in the sense we ascribe but mortal beings with long lifespans.  Noah’s expedition was for the purpose of establishing a working colony of modern humanity, plausibly upgraded to optimize their effectiveness as agriculturalists.  Thus we have these creditable tales of a pantheon of apparent Gods, but really colony leaders who packed up and went home after they had all the colonies operating on a self sustaining basis.  These colonies were certainly established in the  and  at least.  Their real centers can only be guessed at now.
5                    This easily explains the rather curious nature of these pantheons in which interaction with humanity was one of humans dealing with humanoids with similar tastes and similar needs.  What stares through the original stories is a lack of true belief in mysticism to explain the situation.  These are not Gods but just other beings that can love and be hurt and die.
6                    Once they vacated and left us alone, we no longer had the day to day proof of their reality and had to make it up as we went by introducing the mystical solution.
By losing the mystical God(s) and gaining the real God(s) it is necessary to ask the question of when will they drop in and reintroduce themselves to us.  It really should be soon just because we will be able to go and explore the Solar System in fine detail in the next thirty years at most.  They may simply wait for us to go and find them.
However, once the ice is broken we can expect their presence to become visible and to expect to see tourists even as travel bans come off for the first time in perhaps six thousand years.
One observation i would make though is that in none of the myths and all that, is there any indication these peoples ever ruled humanity in any manner or even intervened significantly at all beyond establishing our presence here.  Their own presence was aloof and more in the image of a summer palace or its like which really describes the Atlantean palace based trade empire rather than a real home of the gods.  These 'Gods' always had better places to go. 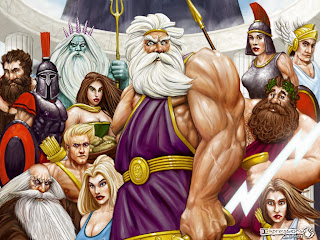 Will The Gods Of Old Be Returning In Full Force Soon?
Submitted by Sean Casteel on Wed, 12/14/2011 - 13:40
By Sean Casteel
http://www.ufodigest.com/article/will-gods-old-be-returning-full-force-soon
Posted by arclein at 12:00 AM