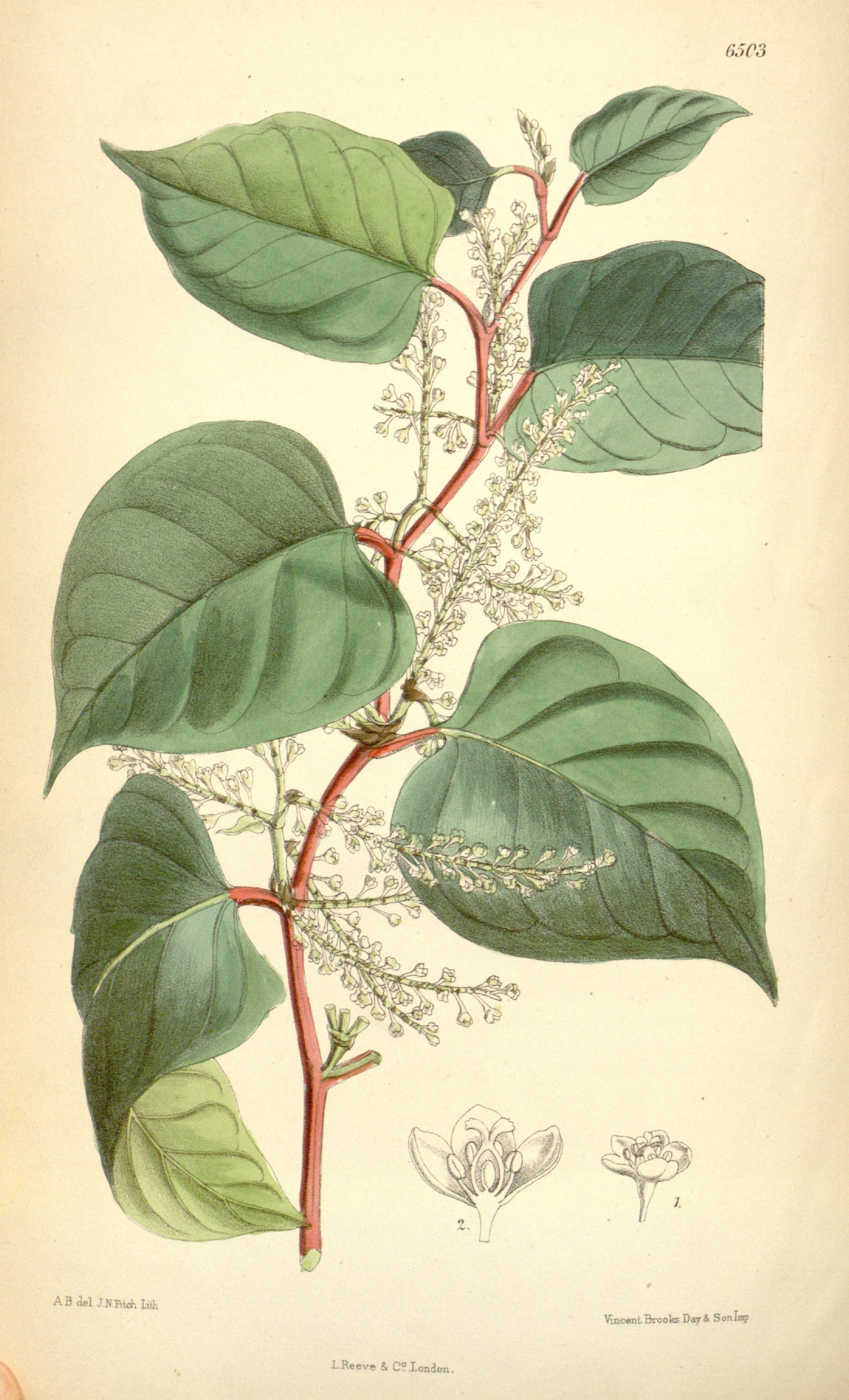 The truth is that we typically consume a small selection of domesticates. So missing a few is no surprise.
However we all know what this plant is as we have all seen it.  We just have to collect some when we are along a wild enough pathway.
Here is enough data to do something with it.  It is now sell on its way to fully entering our cuisine and that is good.  The young stalks are preferred even if we can also use the older stalks as well..


Knotweed is an herb. The whole flowering plant is used to make medicine.


Knotweed is used for bronchitis, cough, gum disease (gingivitis), and sore mouth and throat. It is also used for lung diseases, skin disorders, and fluid retention. Some people use it to reduce sweating associated with tuberculosis and to stop bleeding.
How does it work?


Knotweed might be able to reduce swelling. It might also prevent plaque from building up on teeth.

Japanese knotweed is the absolute worst. At least, that’s what any gardener will tell you. Western chefs, on the other hand... Well, they’re discovering that it makes a great addition to a spring menu.


As more restaurants add foraged ingredients to their repertoire, the range of those ingredients has expanded from mushrooms and to wilder weeds like knotweed. It’s already a popular ingredient among the wild-food-loving Nordic crowd: Noma, Amass, and even Agern, the new Manhattan restaurant from Noma co-founder Claus Meyer. But now plenty of other restaurants—from fine dining institutions to neighborhood spots—have started jumping on the knotweed train.

Normally, foraged foods call to mind delicate, hard-to-find little things: Morels and fiddleheads peeking demurely up out of the leaf litter, wild strawberries the size of your thumbnail. Knotweed is nothing like that. It’s one of the feistiest, most destructive, most unkillable invasive species out there.


As the name suggests, Japanese knotweed is originally from East Asia. In the mid-19th century, though, a horticulturist brought one plant back to his nursery in Holland, and soon was selling it all over Europe to gardeners who liked it for its resemblance to bamboo and its ability to grow everywhere.


Knotweed’s one redeeming quality, then, is that its hollow green stems, segmented like bamboo and freckled with crimson, taste a whole lot like rhubarb (though the two bear no relation). They are tart, crunchy, and juicy; can be eaten raw or cooked; and can lean sweet or savory, depending on how they’re prepared. So knotweed is in many ways the perfect thing to forage: It tastes good, it’s easy to find, and, unlike many wild edibles, it’s at zero risk of being over-harvested.


Tama Matsuoka Wong, who, under the nameMeadows and More, provides foraged plants for quite a few prominent New York restaurants, ranging from Gramercy Tavern to Semilla to Daniel
, says knotweed was actually the first thing she foraged, some five or more years ago, and only because it was unavoidable. “I was just trying to get rid of the invasive plants in my garden,” she says, and “then my dad invited these Japanese professors over.” The professors explained that, in Japan, they eat the new shoots of knotweed in the spring. So Wong tried it, and liked it.

This was all well before Wong had made a business out of foraging all kinds of edible plants, but she’s kept picking knotweed, and has now sold a number of New York chefs on it. This year, she says, “I harvested hundreds of pounds.”


About 100 of those pounds went to Ghaya Oliveira, the executive pastry chef at Daniel Boulud’s two Michelin-starred restaurant, Daniel. Oliveira was introduced to the sour weed by Daniel’s chef de cuisine, Eddy Leroux, who was Wong’s first client and co-author of her book,Foraged Flavor. “First, I just bit into it straight,” Oliveira says, “and I fell in love with the taste.” To her, it’s like rhubarb, but “more earthy. It tastes like rain.” Knotweed is the “gamey” version of rhubarb, she says, so she combines both in her desserts, letting the knotweed enhance the flavor of the rhubarb. The two meld in a hibiscus-tinted compote, a jam at the center of a rolled almond cake, and a rosy quenelle of ice cream. You wouldn’t know the difference from a very good rhubarb dessert were it not for the little rings of confit knotweed, still crunchy, resting atop the center mound of riesling sabayon.


Another one of Wong’s clients, chef Amanda Cohen, takes an entirely different approach to the sour weed. Though she’s put onion in a chocolate tart and turned lettuce into sorbet at her innovative vegetarian restaurant Dirt Candy, she prefers to keep knotweed on the savory side of her kitchen. “Rhubarb has sweetness to it, knotweed doesn’t,” she says, “It’s just sour on sour.” So she pickles it in a simple mixture of water, vinegar, and salt, and scatters the tiny ring-shaped slivers over her “forager’s salad.” They add a sour zip to the tangle of other wild plants and flowers Wong supplies each week, which Cohen arranges with very little other adornment over cubes of soft, pungent cheese.


That versatility is part of knotweed’s appeal. Matt Louis, the chef and owner of Moxy in Portsmouth, New Hampshire, says that in the three years he’s had knotweed on the menu, he’s often made pickles or chutney to go with meat or fish, but one of his favorite uses is in pie. He swaps it for rhubarb in strawberry-rhubarb pie, explaining: “Whenever I’m using anything like knotweed or other lesser-known foraged items, I want to put them in dishes that people can relate to. That pie is something people can embrace.” 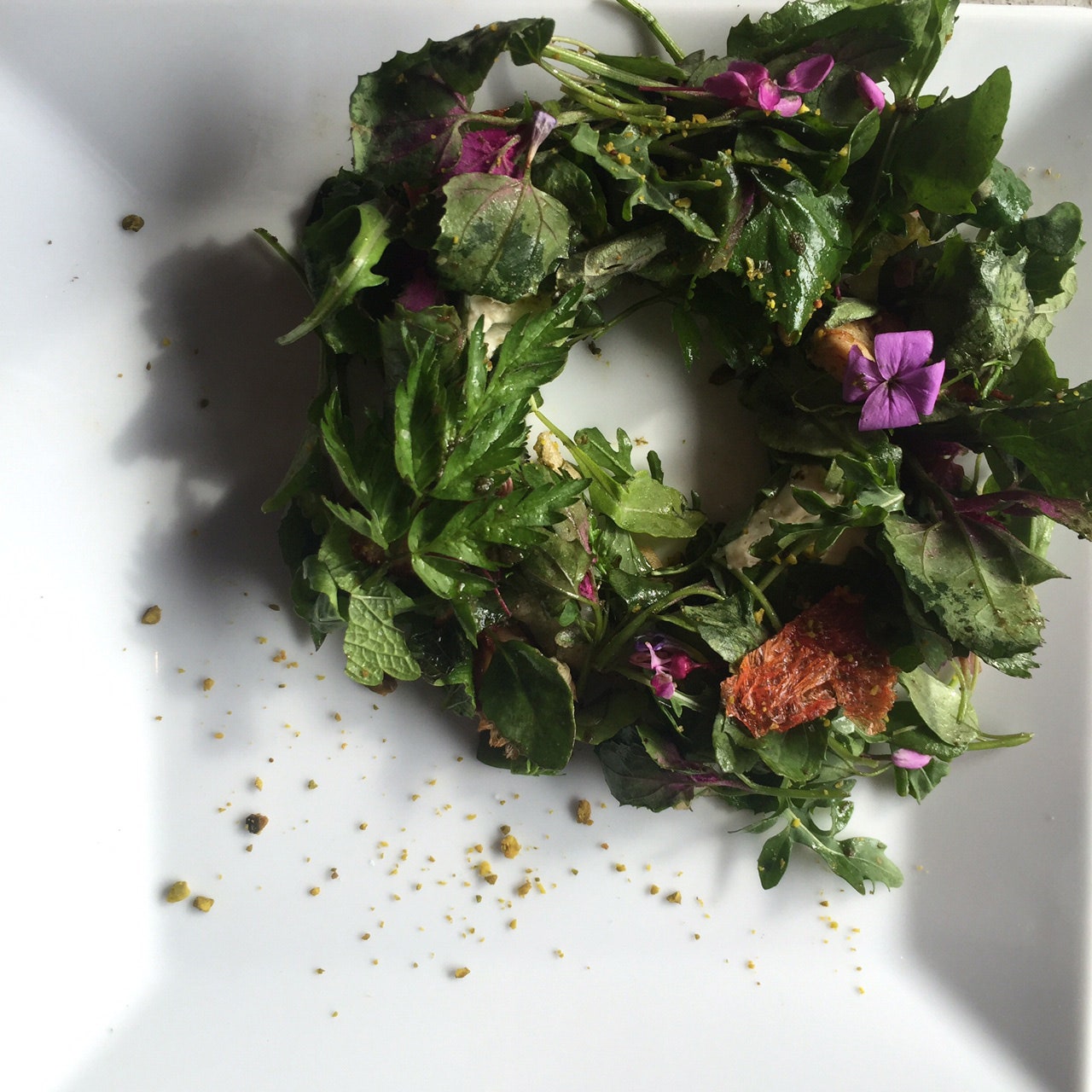 
Meanwhile, at Serpico in Philadelphia, Momofuku alum Peter Serpico likes his knotweed straight. “We've done it grilled, pickled, tempura, and sautéed in oil,” he says, “I enjoy it best just lightly sautéed because you get the tart fruitiness, and as long as you don't overcook it, it doesn't get too fibrous." That’s the way he’s serving it now, alongside fiddleheads and chickweed over rounds of bacon-wrapped pork.


For the adventurous home cook, knotweed clearly isn’t hard to prepare. Wong includes a couple recipes in Foraged Flavor, and another for pickles on herwebsite. Or just try it with any basic quick pickle recipe, or sub it for some or all of the rhubarb in any dessert (keeping in mind that it tends to stay firmer than rhubarb). 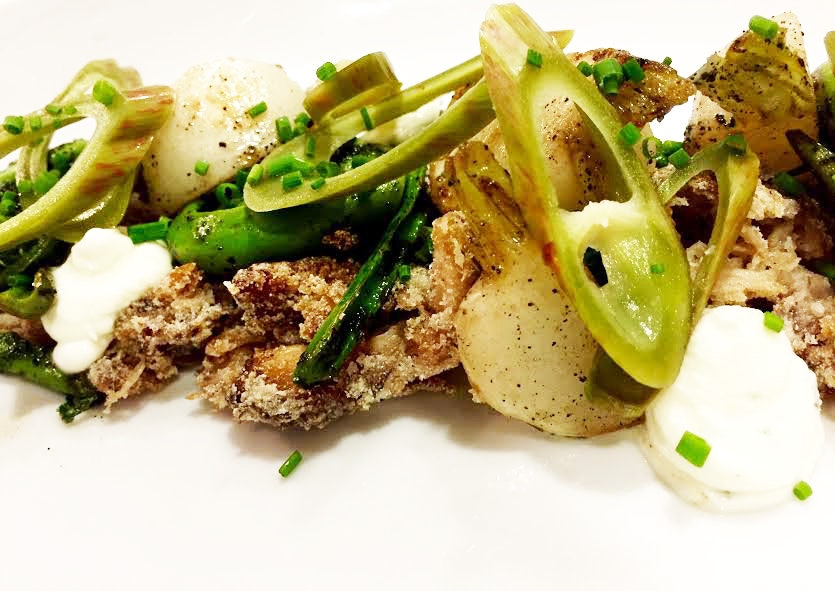 
Finding it, on the other hand, may be a little trickier. Because of its (deservedly) nasty reputation, stores don’t sell it, and some states, including New York, require a license to possess or transport it. But Wong has some tips if you want to forage it yourself.


First, know how to identify it. It has a prettydistinctive look—like bushy, blushing bamboo with large teardrop-shaped leaves—and it’s not hard to find just about anywhere there’s vegetation. Then, go for the smallest, youngest shoots, which look like crimson asparagus poking out of the ground. Anything bigger will be too woody to eat, which means the season is short: At mid-Atlantic latitudes and south, Wong says, knotweed usually starts sprouting in April and is done by mid- or late May, though farther north it can last longer.
Posted by arclein at 12:00 AM