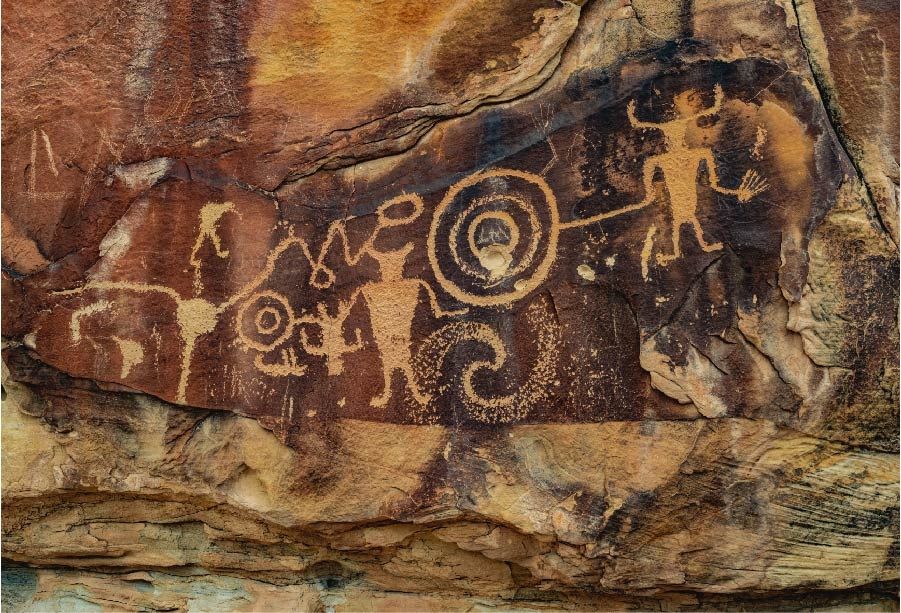 This item nicely dispels the natural mystery surrounding these art objects and informs us regarding their importance in time and space.  All are individually created and out of context with those nearby.
The real context is spiritual advancement.
suddenly it is very clear and independent of our own assumptions.
The earliest known Petroglyphs are thought to have been created around 10,000 years ago. The Petroglyph rock art in India has been dated back to 5000 years BC, and a few Petroglyph sites can be found scattered throughout Australia, Africa and the extent of North and South America.
To archaeologists and anthropologists, Petroglyphs, or rock carvings, had symbolic significance. It seems that everyone but the academic minds agreed upon one common theme of Petroglyphs - they were used as magic. They would use them to predict success or failure for hunts or other ventures needing divine intervention such as winning a battle against their enemies.
Petroglyphs are one of the main features that distinguish cave art from man's other prehistoric creations. While prehistoric drawings were made to record the hunting and rearing activities of their creators, Petroglyphs were created for more spiritual reasons.
Petroglyphs have become increasingly abstract over time; while at first they depicted hunters returning with game, they now depict shamans dancing for abundance. The most common Petroglyph is a spiral that has no beginning or end, symbolizing infinity. Other Petroglyphs include animals such as snakes, elephants, and birds.
While most Petroglyphs were pecked into rock by stone tools, some Petroglyphs have been discovered to have been created with red ochre on cave walls -- ancient artists would trace their hands or bit pieces of charcoal on the wall to create patterns that are still unidentifiable today.
Perhaps one of the most significant examples of modern Petroglyph use is seen during "vision quests," which are common among Native Americans. In these instances, a young man will spend an extended amount of time sequestered away from the rest of his tribe; he will endure hunger and discomfort while he meditates on what it means to be a man, and his Petroglyph will be created at the end of his vision quest.
If you have recently undergone a life-changing experience, make sure that your Petroglyph is as powerful and meaningful as possible by using modern Magick techniques.
Once you have traced your Petroglyph on a blank piece of paper, proceed to cut out the Petroglyph with scissors. In order to increase Petroglyph Magick's power, some modern shamanic practitioners choose to make their Petroglyphs using red ochre instead of pencil lead.
When you have finished cutting out your Petroglyph, go outdoors and bury it in the soil somewhere where nobody else is likely to find it; this process will give your Petroglyph Magick increased potency! 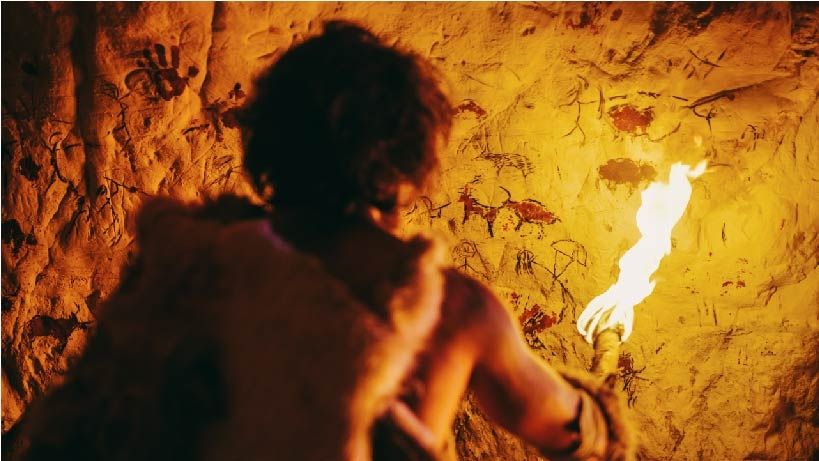 Petroglyphs & Petrograms
Whereas Petroglyphs were "pecked" into stone, the Petrogram is painted on the cave walls. The most famous example are the cave walls in Lascaux.
The Petrogram was not meant to be depicted in context, but rather stand by itself.
It could represent a Shaman, a spirit animal or tree, landscape features such as rivers and hills, or even abstract ideas like the afterlife.
They were usually painted using an ochre-based paint that bled into the crevices of the cave walls; their meaning was determined by context with other Petrograms nearby.
For example, if there are Petrograms depicting hunting scenes and another group of Petrograms showing cattle herding then it is safe to say that they would have been painting more Petroglyphs for good luck in hunting since most people associate having enough food as something vital when thinking about basic survival.
The Petrogram is a symbol that represents an idea to the Shaman instead of an actual statement about a group's fears and desires. The Petrograms would be stored in the Shaman's memory until they were needed.
Then, when he or she was attempting to heal someone or bring good luck in battle, he would simply pull out his book of Petrograms and choose one that fit the occasion.
If the patient improved then it must have been successful; if not then try again next month with another Petrogram (or different symbols altogether).
The best way to demonstrate Petrogram Magick is to do it yourself. It is very easy and can be done in your own home or even outside if you are brave.
However, most Petrogram Magic that I have found is not the type of Petrogram Magick where you write Petrograms on paper or Petrographs in sand and sprinkle them with water to bring rain (although this may be beneficial for farmers).
It was done frequently by pre-historic shamans and was used to create rock art Petroglyphs for their own personal use.
How To Perform Petrogram MagicFirst, find a cave or other structure with Petrograms painted by ancient people (You can place some paintings around a room, for example).
Next, stand at one end of the room as far away as possible from the Petrograms you wish to activate.
While looking at them, stretch your arms out in front of you with your palms facing the Petroglyphs and fingers interlaced.
Then turn around so that your back is towards the Petrographs and walk backwards until you are close enough for the Petrogram to touch one of your heels.
Now simply look down at your Petrogram while remembering all the good times you have had doing whatever it represents (or if it is abstract then think about what it means).
Once all these fond memories come flooding into your mind start to relax more by loosening up some muscles or taking deep breaths. Now use any sort of "trigger word" that feels right just as long as this Petrogram is the only Petrogram being activated by this trigger word.
As you repeat your Petrogram Magick trigger word, take a few steps forward and continue relaxing and concentrating on good times until you have walked out of the Petroglyph room (or near the wall).
Now that you are back outside, or in another part of your home (where there are no Petrograms), relax for a while before going to bed.
If it is early then just rest until dusk when the sun is setting; if it's late at night then get some sleep first after meditating on what this Petrogram means to you.
You can use Petrogram Magick on anything from Petrograms of hunting scenes right down to Petrograms of abstract things like a hand with all five fingers spread out, or a circle with an x inside.
Another example would be cave art that had been painted for divination purposes by shamans in order to solve a problem or answer a question (e.g.: "When will I get married?").
This is simple but rather powerful when combined with proper shamanic methods especially if Petrogram Magick is combined with Petrograms that represent people.
If Petrogram Magick is used in such a way as to activate Petrograms that represent people, then this can be used for divination by projecting the Petrogram and the person it represents into living human bodies.
However, if Petrogram Magick is not wanted anymore then it must be deactivated.
To do this you simply walk backwards towards the Petrograph while holding your Petrogram trigger word in mind and imagine all of your memories of good times fading away or feeling like they are flashing in front of you one last time before vanishing completely.
Then take another look at the Petrograph and imagine it to be in its original form.
The Petrogram Magick trigger word for deactivation is just something that sounds right, but must not be associated with activating Petrogram Magick.
It's best to think of something that does not sound like anything else when deactivating Petrogram Magick.
In conclusion, Petroglyph/Petrogram creation was an ancient practice that served as both art and Magick for prehistoric communities.
By using the above method, you can create powerful Petrograms of your own (and Petroglyphs as well if you are more inclined to "peck" an image into rock than to paint one).
Petroglyph Magick is still practiced today, and Petroglyphs are a great way to ensure continued success in all of your endeavors!
See you again soon,
Leslie McQuade
Posted by arclein at 12:00 AM