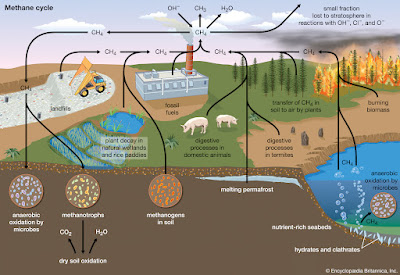 This happens to be absurd. Even more absurd that the whole carbon dioxide causing global warming fairy tale that has now been peddled against all evidence since 2000.
Methane is a gas that rises upward and does not stop until it is in stratosphere or fifty miles up.  There it is consumed by ultraviolet radiation.  Only a scientific moron would attempt to peddle this or of course the IPCC. a minion of the NWO
.This is how they hope to si8destep the folly of the CO2 story.
New IPCC report includes methane removal
as part of the path to containing climate change
Scientists pioneering methane removal available for comment
https://methaneaction.org/
[Port Townsend, Washington – August 9, 2021] Scientists whose work on methane is cited in the new IPCC report on climate change welcome the report’s recognition of methane as a key driver of climate change, and its acknowledgement that emerging methods of removing methane from the atmosphere may be necessary to limit global warming. They and other experts are available for comment.
“Methane has emerged as the critical greenhouse gas to be tackled this decade, and today’s IPCC report affirms that,” said Daphne Wysham, CEO of the NGO Methane Action, which is working to identify solutions that can rapidly reduce atmospheric methane concentrations. “Without rapid reduction in manmade methane emissions and active methane removal, we will not be able to meet our Paris Agreement targets, and Methane Action is the only NGO working on both. We are heartened to see the IPCC acknowledge the importance of our science advisors’ work.”
The IPCC report points out that methane concentrations are higher now than any time in the last 800,000 years. The IPCC has long recognized that methane is a powerful warming agent, at least 84 times more powerful than carbon dioxide over 20 years, and the latest report reiterates that at “10- to 20-year time scales, the temperature response to a single year’s worth of current emissions of 12 SLCFs [“short-lived” climate forcers] is at least as large as that of CO2.” It also shows that methane is the most impactful of SLCFs, second only to CO2 as a driver of global warming, and that warming due to methane from 2010 to 2019 was two-thirds of that due to CO2.
For the first time in a major report, the IPCC also assessed the possibility of actively removing atmospheric methane as part of the pathway to limiting warming. “Proposals to remove CH4 from the atmosphere are emerging (de Richter et al., 2017; Jackson et al., 2019),” it states. “CH4 removal methods seek to capture CH4 directly from ambient air similarly to DACCS [direct air carbon capture and storage] for CO2 using for example zeolite trapping, but instead of storing it CH4 would be chemically oxidized to CO2 (Jackson et al., 2019).”
“Our research, which the IPCC cited, proposes two different methods of enhanced atmospheric methane oxidation (EAMO),” said Renaud de Richter who with his co-authors was first to propose them. “Both are based on photocatalysis and enhance existing natural atmospheric sinks. They can be used both at point sources of major emissions where methane is concentrated, or on a larger scale to lower atmospheric methane concentrations. Mitigating methane emissions and removing atmospheric methane don’t compete with each other; they’re complementary.”
“The data in the new IPCC report reflects what we’ve found in our research on methane removal,” said Franz Oeste, developer and co-patent-holder of the iron salt aerosol (ISA) method of depleting CO2, methane and other SLCFs. “ISA cuts CO2, methane halogenated gases, volatile organic compounds, black and organic carbon and also tropospheric ozone. Those effects could cut the radiative forcing of greenhouse gases approximately to half of current levels.”
This year dozens of leading climate scientists and atmospheric chemists signed a letter spearheaded by Methane Action “recogniz[ing] the need to reduce concentrations of climate forcing agents already in the atmosphere, including methane.”
“Research dollars and private-sector investments are pouring into carbon dioxide removal,” said Rob Jackson, whose work on methane removal the new IPCC study cites. He’s the Douglas Provostial Professor of Earth System Science at Stanford University, a Senior Fellow of the Stanford Woods Institute for the Environment and the Precourt Institute for Energy, and a member of Methane Action’s board. “Methane removal needs similar investment and support to limit global warming to safe levels and restore Earth’s climate.”
“The new IPCC report includes a few future scenarios with possible global warming according to the Paris target of 1.5C, but all of these scenarios include an enormous reduction of methane emissions, including halving methane emissions by 2050,” said Maarten van Herpen, Science Advisor to Methane Action. “Halving methane emissions is going to be a challenge, but we believe it can be achieved. The IPCC report included methane removal technologies in its new report, but the field is still in its infancy. At Methane Action, we’re working to change that, and advance the science of atmospheric methane removal.”
Posted by arclein at 12:00 AM