Why Did Trump release the Vaccines? 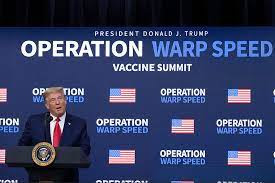 It was a major tactical move that forced the operators to commit full press long before planning and preparation could be completed.  Suddenly millions of untrained minions are put into battle mode against a truly WOKE military.  This cannot end well and the multiple mistakes can be turned against them.

We were never meant to know what was been done to us.  Do you understand that the full military is in battle mode as we speak and that the story is that this is merely the largest ever readiness exercise in History.  That only happened back in the early fifties.

So yes, instead on a five year program of implimentation with accelerating death rates all obscured by the WHO and partners, We got a full press all you can do vaccine push in which plenty of saline solution was also supplied.  We still have victims but we also are flushing out CCP assets.

The fact is that the whole Vaccine roll out is a public shambles and that is why we got a global release from Trump.

Q The Storm Rider: Why did Trump release the vaccines??? As you know now The DEEP STATE CABAL had long ago planned to kill billions through a pandemic that was planned long ago.. ( you can find several sources through LOCKSTEP>ROCKEFELLERS plan/GATES several interviews and speechs to reduce world population/GEORGIA GUIDESTONES/FAUCI assured speech that a Pandemic was coming for trump administration/all the patents owning the Corona virus(SARS)..ect. WHEN TRUMP released the vaccines in record speed….it completely disrupted the DEEP STATE CABAL plans…( Their original plans was to kill and enslave humanity through 5 years of torture/full lockdowns/martial LAWS/mental psychological ops >[MSM] EXTREME EXTREME FAKE DEATH COVERAGES WORLD WIDE >>MOCKINGBIRD<<//[THEY] had other plans to get billions addicted to opioids and deadly medications (that [they] said would combat the virus) that would create deaths and bring People into Severe psychosis (no more production of dopamine/serotonin/oxytocin/endorphins/. By the second year of lockdowns medication including methamphetamines (Speed) DANGEROUS Sleeping pills, Painkillers, and 15 deadly other medications with bring billions into psychosis/ deadly depression/ suicides/ and stop the production of the Pineal Gland.

The drugs alone combined would stop the body from recovery/self Healing and bring the body into chaos and easily sickened by outside sources, such as cancerous products in food and poisonous additives in products, food. Years into the lockdowns the deaths from the FORCED medication and psychological torturer lockdowns and removal of essential fruits, meats, vegetables and grains would ensure sickness and deaths.

WHEN TRUMP released the vaccines… He destroyed the MOLOCH WORLD SACRIFICE SATANIC DEEP STATE PLANS to torture and Kill billions through a Systematic genocidal Agenda… And the children would have suffered publicly also legally addicted to FORCED deadly medications and overdose ( the torture they would endure would insure hospitalization that would induce more torture and pain producing>>> ADRENOCHROME<<(ultimate plan)///..

By Trump releasing the Vaccines he Countered the DEEP STATE CABAL PLANS. And they were forced to spend TRILLIONS across the world creating the vaccines… Much of the vaccines are [FAKE] saline.. But also many are real and laced with mRNA and deadly compounds… That’s why they keep wanting you to take more and more vaccines….( Because they are still producing the real mRNA, nano by-products of deadly additives ( to insure sickness and death and biotechnology engineering control>>In it’s first Stages}

WHEN TRUMP released the vaccines.. Half of Trump  supporters also had great fear of the COVID-19 and believed in FAUCI and WHO and believed in the scamdemic…Trump couldn’t loose these supporters (later their is a plan to correct the VACCINATED2022 )/

WHEN TRUMP released the vaccines the medical Mafia went into PANIC.. They weren’t ready…. And lost TRILLIONS of dollars and in February the World went into spiral in the economy… This was all PLANNED…. This created a ripple effect through DEEP STATE money lines and ties and hidden GOLD/ MONEY/ CRYPTOCURRENCY hit the markets …… WAS A STING OPERATION to find all the SLEEPERS and see where the money was at that was funding the DS in many major countries.

WHEN TRUMP release The Vaccines that deep state came into confusion/ PANIC/ and this created so many mistakes…. That effected the medical Mafia and scientific PAID OWNED community…. And is on going…

EXPOSURE EXPOSURE leaks leaks is happening and even MSM is reporting things they would have never Reported last year. WHEN TRUMP RELEASED THE VACCINES…. IT WAS COUNTER MEASURE IN THE WAR YOU ARE IN!!!!!!…TRUMP LONG AGO TOLD YOU ” THE CHOICE IS YOURS” *everything he is doing now is optics…. It’s not for you!!! It’s for them!!!….* ___ he’s playing both sides of the game….ITS ALL FOR A REASON!!! EVERYTHING HAS MEANING. YOU HAVE MUCH MORE THAN YOU KNOW