Knowing now what we know about dark matter and the related light bodies which happen to be the repository of human and life's intelligence, these orbs are neither a surprise or even a mystery.  That they pay attention to us is interesting. That a light body can be kilometers large is instructive but also not surprising as astral travelers have reported expanding in size to reach huge scales.


This observation conforms to our new understanding of  Dark Matter and the actual fabric of space itself.


Yet a mere few months ago i would have been surprised and with a completely different take on what we are seeing.


Orbs in Space: An Unconventional Phenomenon, and the Tether Experiment

A still from the NASA footage of the 1996 Tether Experiment. (NASA/Public Domain)

The term orb describes those unexpected light manifestations in spherical form which appear in photographs and on film. Authentic orbs have their own flight trajectory and they emit their own light. The phenomenon has attracted the interest of scientists and even that of NASA researchers, especially in the case of the famous Tether Experiment.

Across the entire planet an event was broadcast which had taken place at the end of the year 1972.

According to the information communicated by NASA:

The three American astronauts on the way to the Moon have announced that on the number two panel of the space shuttle Apollo 17 a light signal has been observed, followed by a sound signal. A few seconds later, they disappeared, without the astronauts being able to discern their nature. The problem was immediately studied on Earth. A NASA delegate declared that it was not for the first time, during the Apollo program, that such signals have been recorded during flights.

So these luminous globes known by the name of orbs also seem to manifest themselves in extraterrestrial environment. Very rarely, they are accompanied by weak sound manifestations.

Before this event, NASA researchers were already aware of the phenomenon and they even had a series of recordings brought in by various astronauts. From these, a series of images have been published such as the luminous orb of M. Scott Carpenter from aboard the space shuttle Aurora 7, the images obtained by James McDivitt on board Gemini 4, and then confirmed by the film made by astronauts James Lovell and Frank Borman aboard Gemini 7 and many others.

Still, after the publication of the images caught on camera by Frank Borman aboard Apollo 8, documents of this type have never been made public, only being accessed by NASA specialists. An interesting film which was made public showed a large group of luminous entities which had come from outer space close to Earth. These entities flew at an altitude of over 500 kilometers (310 miles), but as it was intended for the film to remain at the discretion of specialists, it was quickly ‘forgotten’.

In the year 1996, the astronauts from the Columbia space shuttle were working on the technical mission named “The Tether Experiment”. Aside from the research activities, the astronauts had to launch a satellite connected to a very long metallic cable, or tether, for experimental purposes. The launch was filmed with more cameras from aboard the ship, including an ultraviolet light (UV) camera. As the satellite was launched, some devices began to malfunction.

STS-46 TSS-1 deployment. Satellite and tether. These free-flying satellites are used as observation platforms outside of the Orbiter. (NASA/Public Domain)


The 19 kilometer- (12-mile)-long tether snapped and drifted away into space. Nobody had an explanation for the phenomenon—but nobody had suspected any outside interference. Still, upon their return, the surprise came when scientists looked at the UV camera footage.

A still image from the NASA footage showing a so-called orb appearing to float behind the detached tether. (Public Domain)

The astronauts had not seen anything strange while on their mission, but the footage showed a totally different story. On film, the distant metal tether is visible as a small line, but a series of intensely radiant and large sized forms are seen moving in various directions around it. They had well defined, round shapes and they all pulsed with a sort of rhythmic energy. The most surprising thing was the fact that the invisible entities were accompanied by some giant forms with apparent dimensions of approximately three kilometers (almost two miles) across. These forms also radiated in the UV light and their outlines displayed a sort of technical symmetry. The bigger shapes seem to pass behind the tether, revealing their enormous size.

It is believed by some researchers that the cause of the strange phenomena which had taken place around the tether and satellite may have been the unexpected interference of the energy fields generated by the strong radiations of these unknown entities. Still, these strange intelligences apparently never moved too close to Earth in order to avoid affecting it with their radiations. From all of this, one might conclude that these entities are highly intelligent and there is still a lot more to find out about them. 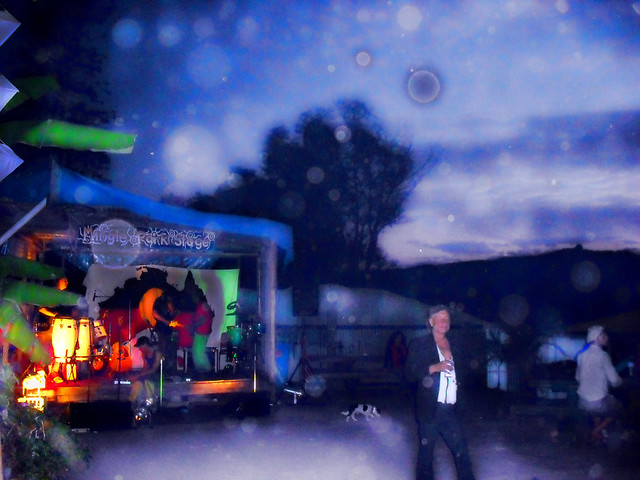