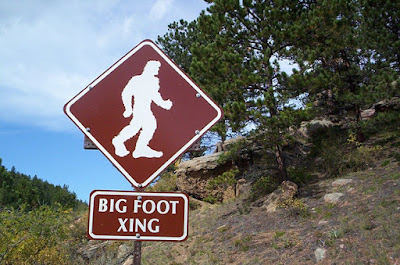 We have two excellent sightings of Bigfoot here from a truly skilled woodsman.  Even better, I have now read hundreds of individual reports most actually double checked to ensure the existence of the witness and although i expected to get a white Bigfoot, this is the first one.


I want to note that true woodsmen will typically have one or two sightings over a long career.   So there is plenty of luck involved.


This recent sighting included the creature obviously devouring likely road kill which is again expected.  What is not so expected is the animals calm behavior.  It knew it was safe enough and obviously did not care .  This is possibly a change in the general behavior of the creature that is duly noted.

Readers are reminded that there exists literally thousands of individual reports like this one.

Randy, a truck driver from Pennsylvania, called in to tell of two Bigfoot sightings that he had in his life.
http://www.phantomsandmonsters.com/2015/11/daily-2-cents-truck-driver-describes.html

“I actually saw two bigfoot in my life. I'm 57 years old and I saw my first one when I was deer hunting up in Northern Michigan, just outside of Alpena, about 18 miles just outside Alpena. I was actually able to watch him with binoculars at about a hundred and fifty yards for about 45 minutes.

He was in the middle of a powerline, going back and forth and through the woods I got a really good look at him for a really long time. I saw my second Bigfoot, I was actually about 35 feet away from him. I was in Texas on Highway 79 in September of this year in this little town called Eastern Texas, it's just a little blip on the map. He was actually off on the shoulder of the road. It was during one of those full moons so there was a lot of deer out on the road so I was pretty cautious as to what I was doing. Now I was coming around a curve and I saw this great big thing out in the shoulder of the road and I said, 'What the heck is that?' And you know it was all white. This guy was all white. And I hit my bright lights on him and he actually rose up and turned around and looked at me.

I was 35 feet away from him when he was looking right at me. This was a Bigfoot without question. He was eating something on the shoulder of the road down there. He didn't pay any attention to me. It was 2 o'clock in the morning. I was the only one out there on the road and there wasn't any where for me to pull over because it was on a curve right there. I tried to get a picture of him from inside the truck but the flash from the camera flashed up against the window and I wasn't able to get a picture.

But this guy, I would say, he wasn't fully standing when he turned around and looked at me but I would say he go about 7 and a half, maybe 8 feet. My guess probably around 600 pounds. He was a big big animal. And he actually rose right up and he turned his torso right at me and he looked right at me as he was coming up to me at 35 feet. I got a perfect view of him and so that's my two Bigfoot stories right there.

The first one I saw when I was 14 years old when I was deer hunting up in Northern Michigan and I was bale to watch him for about 45 minutes with binoculars. The bigfoot that I saw when I as young at 14, he was actually on the other side of the river, Thunder Bay river is right there and Thunder Bay river was between me and him. Now, I spent an awful amount of time in the woods when I was younger and I could track just about any animal there was. I used to stalk deer and stuff. So I was really good at what I did.

But I never saw any tracks in the woods that were for a Bigfoot. Now this guy was going back and forth like he was picking something up out where the powerline was, and taking it back in the woods. He went back and forth maybe 15 or 20 times and then all of a sudden, he stopped and he looked directly at me. And then he walked back in the woods and I didn't see him after that again. So he must have sensed that I was there or something.

That one I saw in Texas was September of this year of the full moon. Like I say, he was 35 feet away from me. As best I could tell, other than his facial features which he had a little bit of black on his face, sort of like a monkey, the rest of his body, from what I could see was all white. His eyes did not appear to be orangish or reddish like an albino normally would, they were greenish in the light. It was definitely a Bigfoot, there was no question about that. I guess he must have been eating a deer or something on the shoulder of the road because he didn't seem to be fazed when I went by him. I looked back in my mirror and he was still there.”
Posted by arclein at 12:00 AM