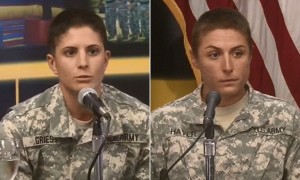 Remember that infamous statement by then-Senator Barack Obama, “we are five days away from fundamentally transforming America?” Everyone let out a frenzied cheer — well, now we’re witnessing what that transformation entails.

Obama stated yesterday, “we’ll make it harder for individuals to access weapons” — question, which individuals? There seems to be a fantasy world in which President Obama resides that has little to nothing to do with truth and reality. And so it continued yesterday with this little tidbit about our military.

As reported by Fox News, “Defense Secretary Ash Carter on Thursday ordered the military to open all combat jobs to women, rebuffing requests by the Marine Corps to exclude women from certain front-line combat jobs.

Declaring that “we are a joint force,” Carter said that while moving women into these jobs will present challenges, the military can no longer afford to exclude half of the population from grueling military jobs. He said that any man or woman who meets the standards should be able to serve, and he gave the armed services 30 days to submit plans to make the historic change.


Carter’s order opens the final 10 percent of military positions to women, and allows them to serve in the military’s most demanding and difficult jobs, including as special operations forces, such as the Army Delta units and Navy SEALs.

The Joint Chiefs of Staff chairman, Gen. Joseph Dunford, former Marine Corps commandant, had argued that the Marines should be allowed to keep women out of certain front-line combat jobs, citing studies showing that mixed-gender units aren’t as capable as all-male units. Carter said he came to a different conclusion, but he said the integration of women into the combat jobs will be deliberate and methodical and will address the Marine Corps concerns.

Dunford did not attend the news conference to announce the change, and when asked about that absence, Carter said he has discussed his decision multiple times with the chairman.”
So let me get this straight. A nuclear physicist who has never served in the military has just “ordered” that combat billets (duty positions) be opened up to women. This is yet another example of the intransigent ideological agenda of progressive socialism as embodied by one Barack Obama.

He exhibited no passion when discussing the horrific Islamic terror attack in San Bernadino — perhaps it was just a “setback.” However, if you bring up the subject of climate change, or social egalitarianism, Obama will show an unrighteous indignation. And for Secretary of Defense Carter to order that our Armed Forces have 30 days to submit plans? How about Carter and Obama take 30 days to develop a coherent strategy to defeat Islamic jihadism?

I have been in combat and there is nothing fair about going mano a mano with someone who wants to kill you. Right now I am re-reading the book “13 Hours” and when you read the account of these “operators”, you come to realize this is not about fairness and the inane liberal progressive ideal of the “participation trophy.”

Consider the visual depictions of “Lone Survivor,” “Black Hawk Down,” and “American Sniper.” These films depicted the 21st century battlefield against Islamic jihadists. There is a huge difference between being in a combat zone and being in close quarters combat. Women have been on the battlefield since Mary Ludwig Hays McCauley, the famed “Molly Pitcher” at the Battle of Monmouth. Today we have women serving in fighter aircraft, attack helicopters, and in ground support roles that place them in harm’s way because the battlefield is no longer linear.

But for SecDef Carter to make this declaration — which we all know came from 1600 Pennsylvania Avenue — just proves an administration hell bent on transformation even when it displays a complete idiocy. They don’t know if the attack in San Bernardino was an Islamic terror attack, but they sure as Shinola know women should be in all positions in the military.

Now of course, the liberal progressive detractors are going to point to the recent graduation of females from Army Ranger school, but folks, there’s a difference in finishing a 60-day intense leadership school and doing ground combat operations for an extended time — and not with blanks.

However, I would like to shine a light on some issues down in Ft. Benning regarding that Ranger School class with the female students. Here’s a report from U.S. Defense Watch you’ll find interesting.

“US Defense Watch and other media outlets have been covering the Ranger School records story since late September. Here’s a summary of the story until now: Congressman Steve Russell (R, OK) contacted the Secretary of the Army on September 15, 2015, and requested the Ranger School records for the first two female graduates, Captain Kristen Griest and First Lieutenant Shaye Haver. Russell, a Ranger School graduate, who served 21 years in the Army and earned a Bronze Star with Valor device, was elected to Congress in 2014. He led 1st Battalion, 22nd Infantry Regiment during its deployment to Tikrit, Iraq.


The Secretary of the Army, John McHugh, stalled Russell for nine days and then asked for an extension to obtain documents readily available. The Army waited another two weeks to tell Russell the documents had been shredded. The Army still refuses to tell anyone what the school’s policy is for the storage and destruction of Ranger School records.


The Army now refuses to send Congressman Russell the so-called “Green Cards” for the female Rangers. The Green Cards are basically a report card on how any Ranger School graduate performed, in a practice dating back to 1952, the Airborne and Ranger Training Brigade keeps a Ranger student’s Green Card, which verifies their attempt or successful completion of the course. So, we have records shredded and now the Army refuses to send the Green Cards to Russell. Instead, Russell was given some type of half-baked white paper showing that women were performing just like men at Ranger School.”

You can read the entire piece here. SecDef Carter stated that any man or woman who meets the standards…but in the case of these three female Ranger school graduates, we have no records of such. And is this how the most transparent administration in history is supposed to gain our trust?

Chairmen Mac Thornberry and John McCain of the House and Senate Armed Services Committee must send a letter to President Obama and SecDef Carter and simply tell them, you ain’t getting one penny of taxpayer dollars until the Ranger school records of the three females are produced. As a matter of fact, you’re not getting any funding until there’s a full hearing held before both committees. We can ill afford radical ideological agendas to dictate our national security strategy.

And it was very telling that the Chairman of the Joint Chiefs of Staff, General Dunford, a decorated U.S. Marine Infantryman, was not standing with the SecDef when he made this declaration. That speaks volumes, and hat tip to General Dunford for taking that stand. I can tell you one thing, if I ever grace the Pentagon halls as SecDef, this will not stand — and I am not a nuclear physicist, just a combat arms career officer.
Posted by arclein at 12:00 AM