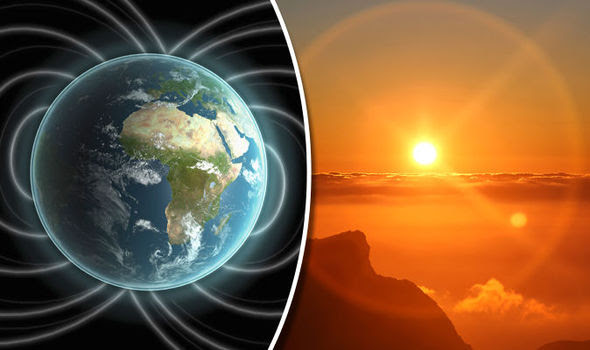 They never quit.  No prior  negative effects have ever shown up in the geological record and all fears are completely ungrounded.  Even our real exposure to EMP pulses from the sun which is a real plausible risk is constrained to the present time and it is actually waning also.


Grid power may only have a couple of decades left and all electronics are actually easily protected.  With the disappearance of the grid, we will have a massively distributed power system that is readily rebooted and replaced as well.   Thus serious risk has been an exposure starting around seventy five years ago and them locally for a long time to another twenty five years.


It is still bad if it were to happen tomorrow but then it is also repairable.


The Earth's magnetic field (left) would be gone, leaving us at the mercy of solar flares
http://nexusilluminati.blogspot.ca/

THE Earth could be left powerless to defend against blasts of solar radiation from the Sun for up to 200 YEARS, leaving us at risk from skin cancer and worldwide electronic communication blackouts, NASA scientists have warned.
By Jon Austin

The US space agency confirmed fears that we may be heading towards an extraordinary event, which would see compasses point SOUTH if the magnetic poles shift.
Climate researchers believe we are heading towards a reversal of the planet's magnetic field, an event that has happened before and has been attributed to wiping out the Neanderthal species.


[ and of course failed to wipe out anything else.  What nonsense.  The Neanderthal was merely absorbed into expanding human populations as all small populations are. - arclein ]
Bruce Jakosky, MAVEN principal investigator at the University of Colorado, Boulder, said when the switch does take place, the Earth's magnetic field which prevents the Sun's dangerous radiation getting through, would be neutralised for around 200 years.
He revealed the detail during an historic announcement about how Mars lost 99% of its atmosphere and its oceans that could have housed early life.

Mr Jakosky explained that Mars had been blasted by solar winds, which had stripped it of its atmosphere, for billions of years since the beginnings of our solar system.

He said: "When the polar shift happens the Earth will have no magnetic field for about 200 years."
During that time the Sun's solar blasts are expected to strip away at our atmosphere as they did on Mars billions of years ago.

But he thankfully added that 200 years would not be long enough for the Sun to significantly reduce the atmosphere for life to die out. 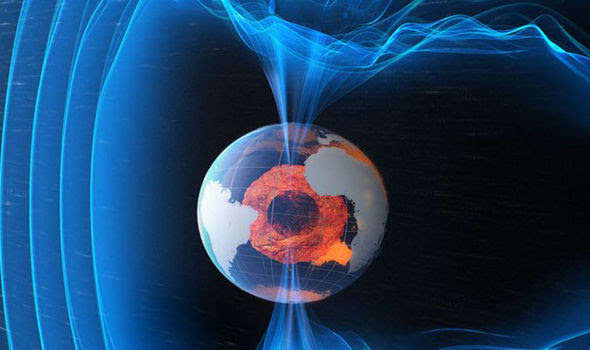 Michael Myer, lead scientist for the NASA Mars mission, added that the Sun had been much more powerful in the early stages of the solar system when Mars had been continually blasted, and, even then the process had taken billions of years and still one per cent of its atmosphere remains.

However, scientists admit that 200 years without a magnetic shield to defend against the Sun's solar storms, which cause the amazing northern lights on earth as the rays hit the magnetic shield, would have implications for us.

The magnetic shield is our first line of defence against harmful UV rays, and any thinning of the atmosphere could increase the risk from skin cancer.

Without a magnetic field, or with a significantly reduced one it could destroy global communications facilities, power supplies, and even lead to fires and rioting on the streets, according to some researchers.

There are even doom-mongers have predicted that a swap of the magnetic poles from north to south would shift the continents so fiercely it would trigger mass earthquakes, rapid climate change, extinctions and global destruction.

Geologists have said the shift event has happened a number of times in Earth's history - with the last one 780,000 years ago during the stone age.

Alan Thompson, head of geomagnetism at the British Geological Survey, said during previous flips: "no worldwide shifting of continents or other planet-wide disasters occurred, as geoscientists can testify to from fossil and other records."

[ Nothing happened!  That is also an observation.  - arclein ]

Earthquakes aside, there is a scientific belief that as we head towards a reversal - which could be less than 1,000 years away, Earth's magnetic field will dangerously weaken leaving us at the mercy of solar storms when radiation and X-rays are ejected from the Sun towards our planet.

This autumn www.express.co.uk reported how there are fears if there is another major solar flare as powerful as the last recorded strongest in Victorian times, trillions of pounds of damage could be done to the economy by power and communication blackouts.

Jean-Pierre Valet, who conducts research on geomagnetic reversals at the Institute of Earth Physics

But it is scientifically accepted out magnetic field has significantly weaker over the past 160 years and it is believed this could mean we are heading for the next big polar reversal, which could happen any time between 1,000 to 10,000 years to finish. 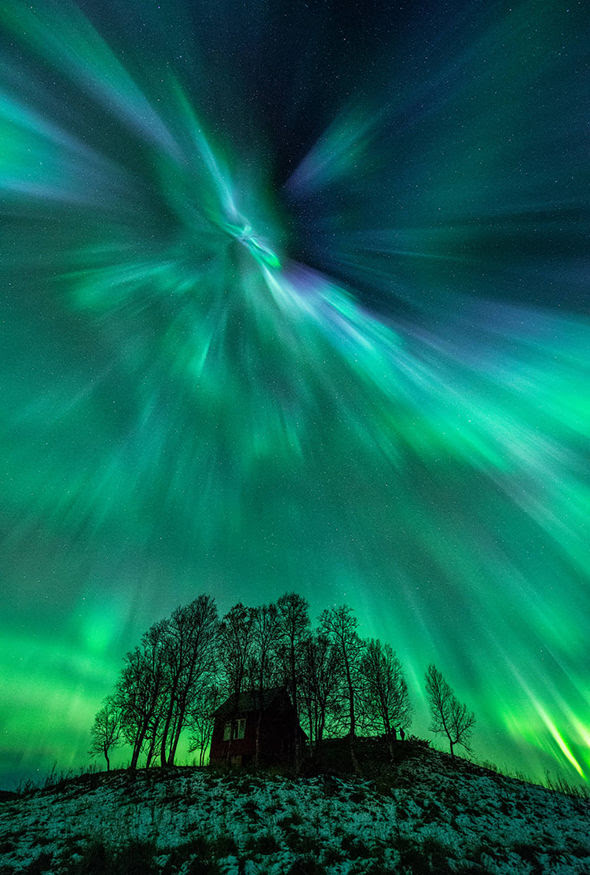 “When the polar shift happens the Earth will have no magnetic field for about 200 years.”
- Bruce Jakosky, MAVEN principal investigator at the University of Colorado, Boulder, USA

It is caused by patches of iron atoms in our liquid outer core getting reverse-aligned, as if they were small magnets oriented in the opposite direction to others around them.

If reversed ions expand to the stage they out power the others, the Earth's overall magnetic field "flips". [Note: Other non-terrestrial mechanisms for producing this effect are more likely – N.I. Ed]
Jean-Pierre Valet, who conducts research on geomagnetic reversals at the Institute of Earth Physics of Paris, said: "The most dramatic changes that occur when the poles reverse is a very large decrease of the total field intensity."

Monika Korte, the scientific director of the Niemegk Geomagnetic Observatory at GFZ Potsdam in Germany, said: "It's not a sudden flip, but a slow process, during which the field strength becomes weak, very probably the field becomes more complex and might show more than two poles for a while, and then builds up in strength and [aligns] in the opposite direction."
When the magnetic field gets weakest, as ours should continue to do so, is when we are at most risk from solar flares.

John Tarduno, professor of geophysics at the University of Rochester, said: "Coronal mass ejections (CMEs) occasionally occur on the Sun, and sometimes hurtle directly toward Earth.
"Some of the particles associated with CMEs can be blocked by Earth's magnetic field. With a weak field, this shielding is less efficient."

Other experts aren't convinced that there's a connection between pole reversals and species extinctions. "Even if the field becomes very weak, at the Earth's surface we are shielded from radiation by the atmosphere. Similarly as we cannot see or feel the presence of the geomagnetic field now, we most likely would not notice any significant change from a reversal," Ms Korte said.
One thing is clear though another flip WILL happen at some stage and our magnetic field has already weakened.

It is believed a growing patch of reverse-alignment in the liquid core beneath Brazil and the South Atlantic is responsible.

Mr Tarduno said: "(It) has been decreasing for at least 160 years at an alarming rate, leading some to speculate that we are heading toward a reversal."

From Express @ http://www.express.co.uk/news/science/617587/Defenceless-Earth-200-YEARS-solar-radiation-blasts-magnetic-poles-shift
For more information about pole shifts see http://nexusilluminati.blogspot.com/search/label/pole%20shift
- Scroll down through ‘Older Posts’ at the end of each section

It takes hours of work every day by a genuinely incapacitated invalid to maintain, write, edit, research, illustrate and publish this website from a tiny cabin in a remote forest
Like what we do? Please give anything you can -

Contribute any amount and receive at least one New Illuminati eBook!
(You can use a card securely if you don’t use Paypal)

"thinning of the atmosphere could increase the risk from skin cancer."

Yeah right- Not a patch on the ongoing release of HIGHLY radioactive particles and gases from our atomic industry, our 'depleted' uranium ammo and the thousands of tests performed by America and Russia in the last 60years. There must be thousands of tons of nano-particle sized highly radioactive dust floating around in the atmosphere.

Somehow having that radioactive dust land on your skin and cause skin cancer just never seems to make a dent in the "sunshine will kill you" story, or breathing in radioactive dust and getting lung cancer is not noted beside "cigarettes will kill"