An Economist's 10 Objections to the Minimum Wage 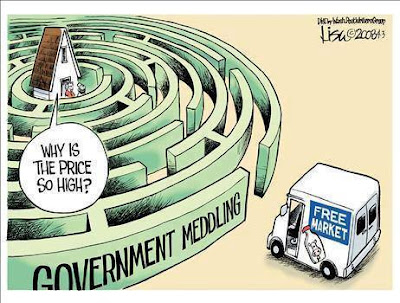 The fundamental problem with minimum wage as presently imagined by the idiots is that it is price control rather than market intervention.  This makes it market interference.  Market interference by regulation is meaningless unless it is combined with a properly managed market with ample liquidity.


Without true planned and capitalized liquidity you have a discount market in which a portion of the population is not able to participate except as slaves which is obviously illegal.  That means they do not work and instead are enslaved to a government handout and all the baggage associated with that.


Since it is obviously stupid it needs to be addressed.  I have done that through the creation of the four hour standby job that provides a night's rest in a warm bed, a shower, laundry,  breakfast and lunch in exchange for four hours of light work.  This protocol is easily implemented using resources already available and its purpose is to make the idea of a minimum wage meaningful.


Thus  worker can after lunch then take on a full eight hour shift if it becomes available and not disturb his options..


An Economist's 10 Objections to the Minimum Wage

One of the biggest political issues right now nationwide, and one that will likely be an important issue in next year’s presidential election is the minimum wage.

Economists are generally in agreement that increases in the minimum wage, especially large increases to $15 an hour like in Seattle, will reduce employment opportunities for unskilled workers.

Despite the inevitable negative outcomes that will surely result from a $15 minimum wage — we’ve already seen negative effects in Seattle’s restaurant industry — politicians and unions seem intent on engaging in an activity that could be described as an “economic death wish.”

Proponents of a higher minimum wage point to the obvious and visible benefits to some workers — those who may find a job at the higher wage or keep their existing job and get a higher wage.

But that is only part of the story — there are many less obvious downsides to an artificially high minimum wages that take longer to recognize, and it’s those inevitable negative effects that lead economists to generally oppose minimum wage laws.

What are the specific objections of economists to the minimum wage and why do they generally favor market wages instead? Here are ten reasons in favor of market wages over a government-mandated minimum wage:

Many unskilled workers will be unable to find work and will be denied valuable on-the-job training and the opportunity to acquire experience and skills.

To the extent that higher minimum wages result in lower firm profits and higher retail prices, that’s a form of legal plunder by workers from employers and consumers that is objectionable.

Market-determined wages are efficient, whereas government-mandated wages create distortions in the labor markets that prevent labor markets from clearing.

In summary, economists are not unconcerned about unskilled workers, we are actually very concerned about those workers. And it is because of that concern to maximize employment opportunities that economists oppose the minimum wage.

Simply put, we would rather see unskilled workers employed at a market wage — even if that wage is only $5, $6 an hour — that allows them to gain valuable work experience and on-the-job training, than to be unemployed at $0.00 an hour. And unfortunately, a $15 minimum wage maximizes the probability that an unskilled worker will be unemployed at $0.00 an hour instead of being gainfully employed.
Posted by arclein at 12:00 AM