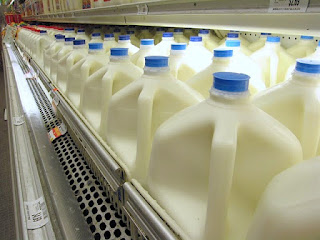 This is a nonsense headline as the work described hardly shows any form of causality. It does somewhat support a much broader argument that infers chemical exposure as a core risk factor but even that is wishful.

Recall that milk consumption has actually been declining while the disease has been rising.

We really do not have a good answer at all and the disease is likely to be cured long before we do..

.
Consuming Milk and Dairy Linked to the Development of Parkinson’s Disease

Time magazine just published the a report on the results of a medical study looking at the factors that contribute to Parkinson’s disease, a slowly progressing neurodegenerative disease that is physically and mentally crippling for those who suffer from it.

The study looked at data from a research project conducted in Hawaii in the 1980’s to determine that milk contaminated with the no longer used agricultural insecticide, heptachlor epoxide, had somehow carried the toxic compound into the patient’s brains where it had accumulated.

“Abbott and his team studied 449 brains and recorded the density of neurons in specific areas of the brain known to be affected by Parkinson’s. They found that men who reported drinking more than two glasses of milk a day (16 oz) showed the thinnest nerve networks in these areas, suggesting compromised function of these nerves, compared to men who drank little or no milk. The milk drinkers also had residues of specific organochlorines called heptachlor epoxide.” [Time]

“The data certainly don’t mean that anyone who drinks several cups of milk a day is putting themselves at risk of developing Parkinson’s. What it does mean is that diet and lifestyle risk factors should be considered more deeply. “This adds to the literature that diet may indeed play a role in Parkinson’s,” says Abbott. “But it also tells us that there is more to food than just its nutritional value. There’s contamination, and what’s on that food.” [Time]

At a time when the public is beginning to understand how corporations and governments are pushing un-natural foods and chemicals on people while restricting and demonizing natural alternatives that work, this report lends more credibility to the growing body of evidence that eating organic foods is an intelligent choice to limit exposure to toxic agrochemicals.

Furthermore, raw milk has been known for generations to be beneficial to human health, yet the government persecutes raw milk vendors at times more severely than they do drug dealers, demonstrating that the establishment wishes to put up every roadblock possible to prevent people from achieving natural health without dependency on big pharma.

Ironically, another recent study suggest that cannabis may in fact be a very effective cure for Parkinson’s disease, which is the exact opposite of what we have been told for years by the mainstream media about this widely illegal, but highly potent natural medicine.

Alex Pietrowski is an artist and writer concerned with preserving good health and the basic freedom to enjoy a healthy lifestyle. He is a staff writer for WakingTimes.com and Offgrid Outpost, a provider of storable food and emergency kits. Alex is an avid student of Yoga and life.

This article (Consuming Milk and Dairy Linked to the Development of Parkinson’s Disease) was originally created and published by Waking Times and is published here under a Creative Commons license with attribution to Alex Pietrowski and WakingTimes.com. It may be re-posted freely with proper attribution, author bio, an
Posted by arclein at 12:00 AM