How Lasers Refrigerate Water. What? 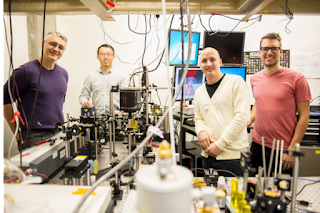 This is not quite the answer yet, but it has got me thinking.  We are producing coherent light at high voltage with no heat produced or so close as to not matter.  This suggests that we can use this to produce refrigeration.  It needs to be played around with.
Recall that we have also now altered gravity rather easily once we began working with this..
Early days everywhere but real progress also.
.
.

How lasers refrigerate water. What?

Lasers are typically used to heat or burn. But new research shows that lasers can cool things, such as water, too.


Lasers have long been used to heat or burn. But lasers can also push temperatures in the opposite direction, according to new research by scientists at the University of Washington (UW) in Seattle.

The theories behind lasers were first concieved by a group of scientists in 1957 - and the first laser was built in 1960. Since then, these devices that emit light through optical amplification have been used to heat, cut, and precisely measure, not to mention capturing the public imagination in science fiction movies. But this new research, recently published in the Proceedings of the National Academy of Sciences, is the first to use a laser to cool water outside of a vacuum.

“Typically, when you go to the movies and see Star Wars laser blasters, they heat things up. This is the first example of a laser beam that will refrigerate liquids like water under everyday conditions,” senior author Dr. Peter Pauzauskie, UW assistant professor of materials science and engineering, said in a press release. “It was really an open question as to whether this could be done because normally water warms when illuminated.”

Laser refrigeration was first discovered by scientists at the National Laboratory in Los Alamos in 1995, but that process occurred under vacuum conditions. The UW researchers are the first to unlock the secret of how to use a laser to cool liquids under normal conditions.

The breakthrough was achieved by aiming a high-heat laser at a tiny crystal suspended in water. The heat was so high that it produced a glow, which then carried heat away from both the crystal and the water that contained it. In order to determine whether or not the crystal was, in fact, becoming refrigerated, they designed it so that it would change color as it cooled.

Because the laser-refrigeration process is so energy-intensive, the UW scientists have only applied its incredible powers to zap a single nanocrystal, but they want to improve the laser’s efficiency and continue their experiments.

The scientists say the laser-refrigeration technique may have practical applications in the real world, including isolating molecules for detailed study. Discovery News reports that the scientists are also examining how this discovery could help industrial professionals in precisely targeting tiny areas that need cooling, especially in biological research.

“There’s a lot of interest in how cells divide and how molecules and enzymes function, and it’s never been possible before to refrigerate them to study their properties,” said Dr. Pauzauskie, who is also a scientist at the U.S. Department of Energy’s Pacific Northwest National Laboratory in Richland, Wash. “Using laser cooling, it may be possible to prepare slow-motion movies of life in action. And the advantage is that you don’t have to cool the entire cell, which could kill it or change its behavior.”

“Few people have thought about how they could use this technology to solve problems because using lasers to refrigerate liquids hasn’t been possible before,” Dr. Pauzauskie added. “We are interested in the ideas other scientists or businesses might have for how this might impact their basic research or bottom line.”
Posted by arclein at 12:00 AM