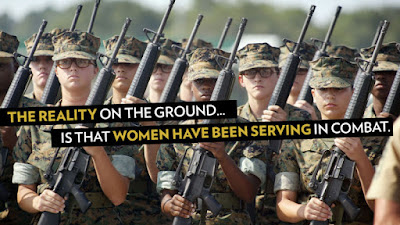 The numbers say that the top quarter can match the lowest quarter and participate and so they should.  A rarity will make it into a higher standard.  But so what?  soldiers die first from their mistakes and simple bad luck and last from been over matched mano a mano.


That said, all this is easily explained by the simple by simple muscle mass differences and not by skill and instincts.  So let us leave it at that and allow women to be combatants.  However, i would insist that we form all female combat teams as well and quite the mixing game.  Combat ensures closeness and sexual distraction all of which lowers combat alertness.


i do not know about women but men are hard wired to lose their edge or battle rage the moment they eyeball a set of breasts.  Try it out when you are angry with your other half.  It is laughable.  No discipline can affect that biological response.  Thus close contact in a combat situation is naturally dangerous even if one is aware of the phenomena..

The decision opens the military’s most elite units to women who can meet the rigorous requirements for the positions for the first time, including in the Navy SEALs, Army Special Forces and other Special Operations Units. It also opens the Marine Corps infantry, a battle-hardened force that many service officials had openly advocated keeping closed to female service members. “There will be no exceptions,” Carter said. “This means that, as long as they qualify and meet the standards, women will now be able to contribute to our mission in ways they could not before.”

This decision is indeed historic — a historic mistake. Keep in mind that the Obama Administration makes this decision even after intensive Marine tests showed that mixed-gender units were far less capable than their all-male counterparts. Women were injured “twice as often as men,” less accurate with their weapons, and less able to “remove wounded troops from the battlefield.” As I wrote at the time, even that devastating summary understates the differences:

All-male units performed better in 93 of 134 categories evaluated, and there were “notable” differences in accuracy in “every individual weapons system.” Physically, the top 25th percentile of women overlapped with the bottom 25th percentile of men, and they possessed less anaerobic power, anaerobic capacity, and aerobic capacity than their male colleagues. Women undergoing entry-level infantry training were injured at “more than six times the rate of their male counterparts.” This decision has nothing to do with combat effectiveness.

Indeed, expect combat effectiveness to steadily degrade as the social justice warriors inevitably take aim at physical standards that will exclude the vast majority of women who attempt to join the infantry or special forces. Radical feminists will find infantry units that are four percent female almost as intolerable as units that exclude women entirely. Even if the standards don’t change on paper, instructors at the various relevant military schools will be put under enormous pressure to pass sufficient numbers of women. Unless the next defense secretary has the courage to reverse Carter’s decision, America will pay a blood price for this insanity. Political correctness kills.
Posted by arclein at 12:00 AM