When did the Mayas come to the North American Mainland? 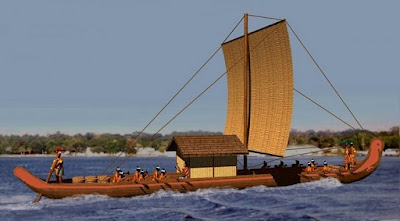 This makes it clear that large scale migration from Mayaland took place beginning around 800 Ad through 1400 AD in response to varying tribal fortunes in war.  This is a span of around six hundred years and ample to support the huge amounts of attapulgite found in Mayaland and the unexpectedly large population that made the move

It says little however regarding the real antiquity of the mineral trade itself which could easily have started and in my view likely did, back during the Atlantean Bronze Age between 2400 BC through 1159BC when trade was hugely curtailed but not ended.

Just as agricultural richness attracted European farmers over the last three centuries, the same held true here. for a six century span.  This has not been specifically investigated, but i suspect that corn culture included terra preta as well.  The soils in Florida obviously demand it.  I have seen one clear reference so far that supports this conjecture.
.
When did the Mayas come to the North American Mainland?

That is a very good question, which really can’t be answered with certainty . . . Few contemporary archaeologists have dared to ask it.

Using attapulgite as a measuring stick

The mineral attapulgite or palygorskite is the active ingredient in Maya blue pigment, which is renowned for its ability to resist deterioration over time. Attpulgite was also mixed with red ocher to make a red stucco pigment and copper oxide to make a light green pigment.

The only significant source of attapulgite in the Western Hemisphere is in Southwestern Georgia. There is a minuscule amount in Yucatan . . . not nearly enough to stucco even one of the major cities.
Several years ago, a cluster of highly publicized studies by American universities located attapulgite in a couple of cenotes in Yucatan. After the newness of the press releases died out, fact checking revealed that these studies were merely finding decomposed Maya Blue that had been applied to sacrificial victims. The University of Minnesota is the only university that has dared to compare attapulgite in Georgia to blue stucco in Mexico, and it was a 100% match at Lakamha (Palenque in Spanish.)

Obviously, for vast quantities of attapulgite to be imported to the Highland Maya city of Lakamha along with the yaupon holly bush, Maya traders must have been fairly familiar with the geological resources of the Lower Southeast for a long time. They would have needed a chain of safe harbors along the Florida Gulf Coast to pull their big freight canoes into at night and during storms. That, in turn, would have required a chain of treaties or military actions.

Lakamha was founded at some point in the Late Formative Period (400 BC – 250 AD). It early stages have never been excavated. Its written history dates from around 450 AD. Its existence as a major city dates from around 580 AD to 800 AD. Thus, we can be certain that Maya traders were coming to the Southeast as early as 580 AD. Around 800 AD the mega-volcano El Chichon erupted in Chiapas, causing the abandonment of Lakamaha and a massive diaspora of the Itza People.

Mexican anthropologists have never been able to determine where most of the Itza went. The Itza capture of Chichen about 100 years later does not account for most of the population loss. Thus, around 800 AD is a likely time when the first significant bands of Itza refugees began arriving in North America. The Kennimer Mound in Northeast Georgia is the earliest structure to display Itza architectural traditions. It has not been radiocarbon dated, but there are Napier Culture potsherds on the surface, which suggests a 750-850 AD construction date.

There was a wave of towns with Mesoamerican characteristics being founded in the Southeast between around 900 AD and 1050 AD. The region around Lake Okeechobee, Florida exploded with population around 900 AD. The first settlement on the Ocmulgee Acropolis was about that time. Around 990 AD, towns with Mesoamerican-Mississippian traits were founded on the Etowah River in NW Georgia, at Ichese on the Ocmulgee River and in Bessemer, Alabama.

What archaeologists will need to determine is the precise date when shell tempered, plain redware pottery first appeared in the Southeast. This is what Maya commoners made exclusively. It has been precisely dated at Ocmulgee National Monument at 900 AD. My suspicion is that old redware will be found in the vicinity of Savannah, if someone can find an undisturbed town site from that era.

There was a second wave of towns being abandoned and founded in the Lower Southeast between 1150 AD and 1200 AD. This coincides with widespread attacks by Chichimec barbarians in Central Mexico and the defeat of Chichen Itza by Mayapan in the Yucatan Peninsula. The hybrid Maya population of Tamaulipas was completely driven out of Mexico. Tamualipas is an Itza word. This period seems to mark the final large scale immigration from Mesoamerica and the Caribbean Basin into southeastern North America.

The last and perhaps, smallest wave of Mesoamerican immigration into the Southeast would have occurred around 1300-1400 AD. This is the migration described in the Migration Legend of the Kaushita People. Aztec armies launched multiple invasions of the descendants of the Toltec Civilization in East-Central Mexico.

Using corn as a measuring stick

An alternative approach would be to assume the arrival of maize (American corn) as a datum point for Mesoamerican contacts with North America. Primitive maize pollen was found in southeastern Alabama that was radiocarbon dated to around 1200 BC.

Archaeologist William Sears calculated the radiocarbon date of the initial cultivation of improved corn varieties at Fort Center to be around 850 BC or earlier. It was cultivated in raised beds composed of improved soil. Corn does not grow well in the natural soils of Southern Florida. The Seminole Tribe must grow its feed corn in northwestern Florida or buy it from elsewhere.

Large scale corn cultivation appeared at Ocmulgee National Monument at least as early as 900 AD, but surprisingly few radiocarbon dates have been taken there. Researchers may find older dates farther down stream on the Ocmulgee River or near Savannah.

It will be awhile for the Apalache Foundation will be able to carry out significant research into the “Maya Chronology” question. We still have not begun to understand the Apalache Culture, which began in the Woodland Period, but was synonymous with the “Lower Creeks” by the 1730s. The Apalache Culture obviously originated with immigration by Panoan peoples from eastern Peru. Swift Creek Stamped Pottery in Georgia and Late Formative Period Conibo Stamped Pottery in Peru were pretty much the same. Somewhere in the time after the Swift Creek Culture declined, Itza Maya cultural traditions began blending with the old traditions. When is the question.
Posted by arclein at 12:00 AM