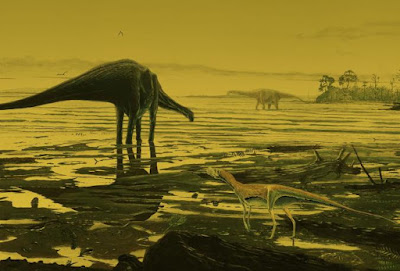 i suspect that the sauropods where water lovers who mostly went after crocodiles. Those jaws had to be good for something and crushing a croc is a pretty effective killing method. In fact i have posted that there is a good chance that they are still in Northern Australia and are simply mistaken for crocs in the water.

The brackish swamp is similar to Northern Australia's environment.

Fossilization is a tricky method of sampling the past and it is far too easy for one descriptive sample to lock in a set of erroneous assumptions. So far my best example is the Giant Sloth which was selectively sampled by La Brea. .

By Brian Switek, for National Geographic

Hundreds of tracks discovered along Scotland’s coast show that huge, long-necked dinosaurs once trod there.

The giant dinosaurs' relationship to water has long been debated. For much of the 20th century, paleontologists thought sauropods had to wallow in swamps, where the water could support their massive bulk. But finds during the “Dinosaur Renaissance” of the 1970s and '80s banished this old imagery. Sauropods turned out to be surprisingly light for their size, more likely to float than to sink their feet to a lake bottom. A new view had sauropods roaming forests, rather than steaming marshes.

Now, the new footprints on the Isle of Skye are part of a growing picture that some sauropod dinosaurs also frequented the edges of lagoons and ancient coasts. The geology of the Isle of Skye site presented unequivocal evidence that the dinosaurs were walking around a brackish lagoon.

“We had gone out to a lonely stretch of coast on the far northeastern tip of the island,” says University of Edinburgh paleontologist Stephen Brusatte, who scouted the Isle of Skye site after a geologist spotted bones there. After spending the day finding mostly shark teeth and other small fossils, Brusatte says, he and fossil fish expert Tom Challands spotted what looked like a pothole. It was a dinosaur's footprint.

That initial find turned into a string of tracks over an area measuring about 49 feet (15 meters) by 82 feet (25 meters).

But it’s not just the size of the tracksite that’s remarkable. The Isle of Skye footprints date back to the Middle Jurassic, over 161 million years ago. This, Brusatte says, “is one of the most poorly understood time intervals in dinosaur evolution.” The tracks offer a new glimpse into which dinosaurs lived in the area and how they behaved during this mysterious time.

Dinosaur bones are rare in Middle Jurassic rocks, notes Emory University paleontologist Anthony Martin, and even fossil skeletons can be transported from where the animal died. Tracks, however, are a different story. Footprints “are extremely valuable for filling gaps in our understanding of dinosaur evolution,” Martin says.

The exact identity of the dinosaurs that left the footprints is unknown. Unless a dinosaur literally dies in its tracks, it’s usually impossible to match a skeletal foot to footprint.

But the tracks preserve enough detail for Brusatte and coauthors to identify them as sauropod dinosaurs—like the embattled Brontosaurus and its relatives—that walked with their legs relatively close to each other along the midline. A good candidate for this sort of trackmaker, Brusatte says, is a Middle Jurassic dinosaur named Cetiosaurus, which also happens to be one of the first dinosaurs ever named.

Creatures of the Lagoon

The ancient environment where these dinosaurs tromped around also came as a surprise.

Paleontologists are as yet uncertain as to why sauropods at the ancient Isle of Skye and other sites around the world regularly skirted the margins of seas, lagoons, and wetlands. Perhaps the lagoons and coasts boasted a food source, protection from predators, or some other draw, Brusatte says.

A sauropod footprint from the new site in Scotland shows the outline of the dinosaur's toes.


Martin agrees, noting that finding sauropod tracks in coastal habitats is not all that surprising given that these places “provided paths of least resistance for sauropods moving from one place to another” thanks to flat, easy-to-navigate shorelines where predatory dinosaurs would have had more difficulty ambushing prey given the lack of cover.


So while sauropods were largely landlubbers, some of them were comfortable with at least getting their feet a little wet. “Dinosaurs were probably capable of doing a lot more, and living a whole lot more places,” Brusatte says, “than we give them credit for.”