This is meant as a handy refresher only and may help to check out notation.  This is not meant to help those unfamiliar with the topics.  We also lost a couple of paragraphs due to format forces brought about by attempts to convert to code.


Otherwise this is meant for the record.

The electro-magnetic (e/m) field is a vector field of forces acting on charged objects. As forces are vector quantities (forces acting in an associated direction), the e/m field equations involve vectors. 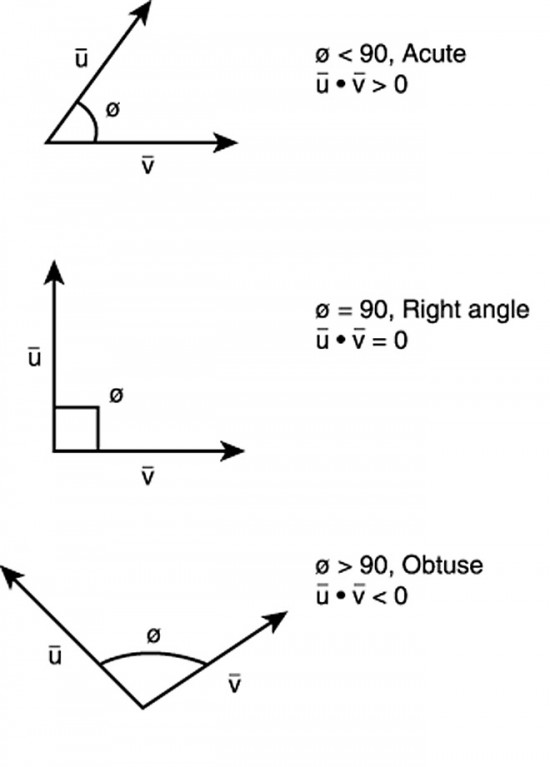 The cross product A×B (read as “A cross B”)  is defined as AB sin(θ)an,  where an is the unit vector normal to the plane of A and B. Note that the cross product of two vectors is also a vector and its direction is orthogonal (perpendicular) to both A and B; i.e., the resultant vector involves a third dimension compared to the 2D plane containing the first two vectors. 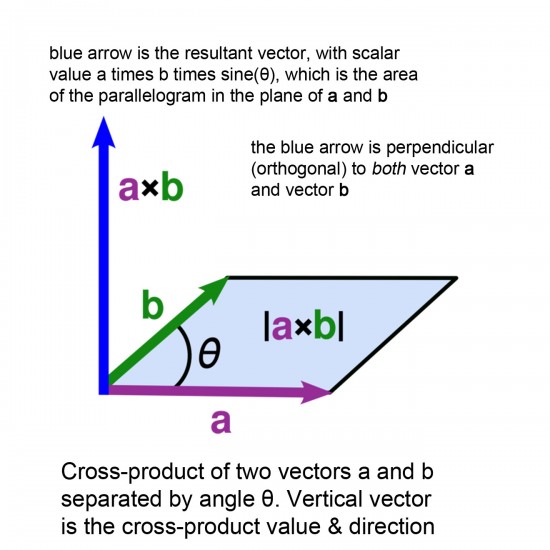 Note that Div A involves a dot product and is therefore dependent on angles. The angle is usually that between the vector and the normal to the surface being analyzed.

Δ×A or Curl A is the curl of the vector field A. The curl of a vector field is another vector field which describes the rotation of the first vector field; the magnitude of Δ×A is the magnitude of the rotation, and the direction of Δ×A is the axis of that rotation as determined by the right-hand rule.  If one imagines any 3D vector field to represent fluid flow velocities, then the curl of the field at a point would be indicated by the way a small sphere or a paddlewheel placed at that point would be rotated by the flow.  In a 2D flow it is easy to see that the direction of the axis of rotation of a circle (the 2d analogue of a sphere) in the flow will be in the third dimension, as is given by the use of the cross product in calculating the curl.

Two useful properties of the Curl operator are:

Example: To visualize (2), think of a scalar field such as an area of hilly land, where contours of constant elevation above sea level are “drawn” along the ground. Elevation “h” at any given point (x,y,z) would then vary with position, so its function is h(x,y,z).  The gradient del(h) would be a vector that points, starting at the point (x,y,z), perpendicular to the contour line through (x,y,z) and straight “down the hill”.  Imagine the way water flows downhill, or which way a marble would roll, and that’s the direction the gradient vectors point, always perpendicular to the equal-elevation contour at any point.  Because these vectors are straight, they have no curl, or bend. That’s why, mathematically,  ‘del × (del h) = 0′.

In practice, this means that an electric field in which the lines of flux are straight (e.g., between the layers of a plasma double layer or a capacitor, ignoring edge effects where the lines are not straight), a charged particle will be accelerated from rest in a straight line: the electric field has no curl.

Vector algebra becomes even more important in analyzing particle interactions when several forces may be present, as when a charged particle enters both an electric field and an associated magnetic field simultaneously, at an oblique angle so that its motion vector can have one component normal to the field lines and another (“drift”) parallel to them. The Mathematica©-based images in Chapter 4, ¶4.3, are indicative of some of the complexities of such interactions using only 1 particle.  Plasma are double digit orders of number of particles higher than this simplest case, and the feedback mechanisms and complex particle motions that develop cause the plasma to create and maintain charge separation, to separate bodies with one electrical field potential from a volume of differente potential, to initiate current flows, to accelerate particles to relativistic velocities and radiate strongly, to pinch and roll up current sheets into filamentary conducting plasma structures like lightning, coronal loops and  galactic jets.

For ease of explanation, the following will refer to “fields” as though they possess some independent physical reality.  They do not.  The use of fields is as an aid in understanding how forces exerted by and upon real particles, and how the positions (coordinates) of those particles may exist at a given time, or may vary over an interval of time. Field lines are also convenient notational devices to aid in understanding what physically is going on, and are not “real”.  An oft-used example is the set of lines or contours of equal elevation relative to some fixed reference value, often found on topographic maps of land areas, and varying pressure distributions on weather charts. Such lines do not exist as real physical entities; they can be used for calculation and visualization of simple or complex phenomena, but they do not effect changes or position or exert force or anything else, themselves.  Imagining that they are real is called reification; it can be a convenient aid to better understanding, but it is incorrect to say that field lines of any type are real or “do” anything.

The implications of Maxwell’s Equations and the underlying research are:
The Lorentz Force Law

The Lorentz Force Law expresses the total force on a charged particle exposed to both electric and magnetic fields. The resultant force dictates the motion of the charged particle by Newtonian mechanics.

The Maxwell Equations are the result of combining the experimental results of various electric pioneers into a consistent mathematical formulation, whose names the individual equations still retain. They are expressed in terms of vector algebra and may appear, with equal validity, in either the point (differential) form or the integral form.

The Maxwell Equations can be expressed as a General Set, applicable to all situations; and as a “Free Space” set, a special case applicable only where there are no charges and no conduction currents.  The General Set is the one which applies to plasma: 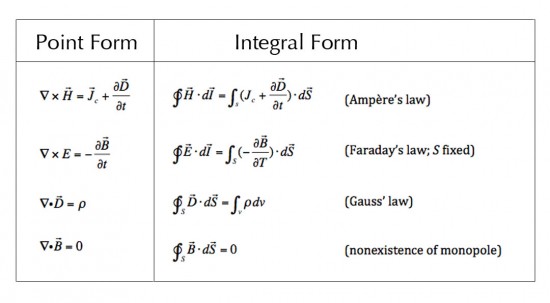 where
Gauss’ Law states that “the total electric flux (in coulombs/m2) out of a closed surface is equal to the net charge enclosed within the surface”.

Note that it does not matter what size the enclosing surface is – the total flux will be the same if the enclosed charge is the same. A given quantity of flux emanates from a unit of charge and will terminate at infinity in the absence of a negative charge. In the case of an isolated single positive charge, any sphere, for example, drawn around the charge will receive the same total amount of flux.  The flux density D will reduce in proportion (decrease per unit area) as the area of the sphere increases.

Gauss’ Law for Magnetism states that “the total magnetic flux out of a closed surface is zero”.

Unlike electric flux which originates and terminates on charges, the lines of magnetic flux are closed curves with no starting point or termination point. This is a consequence of the definition of magnetic field strength, H, as resulting from a current (see Ampere’s Law, below), and the definition of the force field associated with H as the magnetic flux density B = μH in teslas (T) or newtons per amp meter (N/Am).

Therefore all magnetic flux lines entering a region via a closed surface must leave the region elsewhere on the same surface. A region cannot have any sources or sinks. This is equivalent to stating that magnetic monopoles do not exist.

Ampere’s Law is based on the Biot-Savart Law

As current elements have no independent existence, all elements making up the complete current path, i.e., a closed path, must be summed to find the total value of the magnetic field strength at any point. Thus:

where the integral is a closed line integral which may close at infinity.

Thence, for example, an infinitely long straight filamentary current I (closing at infinity) will produce a concentric  cylindrical magnetic field circling the current in accordance with the right-hand rule, with strength decreasing with the radial distance r from the wire, or:

(note the vector notation in cylindrical coordinates; the direction of H is everywhere tangential to the circle of radius r)

Ampere’s Law effectively inverts the Biot-Savart Law and states that “the line integral of the tangential component of the magnetic field strength around a closed path is equal to the current enclosed by the path”, or

∫H・dl = Ienc  where the integral is a closed line integral

Alternatively, by definition of curl, Curl H or Δ×H = J, the current density.

This effectively means that a magnetic field will be generated by an electric current.
However, this only applies to time-invariant currents and static magnetic fields.  As Jc = σE, this implies that the electric field is constant as well.

To overcome these restraints so as to allow for time-varying charge density and to allow for the correct interpretation of the propagation of e/m waves, Maxwell introduced a second term based on the Displacement Current, JD, where

arising from the rate of change of the electric field E.

Maxwell’s correction, as included in the revised Law, dictates that a magnetic field will also arise due to a changing electric field.

Faraday’s Law states that “if the magnetic flux Φ,  linking (i.e., looping through) an open surface S bounded by a closed curve C, varies with time then a voltage v around C exists”; specifically
v = -dΦ/dt

or, in integral form,

Thus if B varies with time there must be a non-zero E present, or, a changing magnetic field generates an electric field.

The minus sign in the equation above indicates Lenz’s Law, namely “the voltage induced by a changing flux has a polarity such that the current established in a closed path gives rise to a flux which opposes the change in flux”.

In the special case of a conductor moving through a time-invariant magnetic field, the induced polarity is such that the conductor experiences magnetic forces which oppose its motion.
Posted by arclein at 12:00 AM