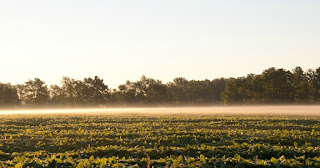 You cannot pay them all off. The EPA truly had no choice as far as the science went, but that has not stopped them before either. Usually though they have erred on the side of caution and anti development biases.

Industrial agriculture is not going to be chemically based industrial farming. It will be industrialized organic methods.  After all we really do not wish to return to back breaking labor for nominal wages.   It was not even particularly smart farming either.

Slowly the claw back against Roundup is getting underway.  It will likely take decades to fully implement but it is started.
..
.
EPA Turnaround on Toxic Herbicide 'Huge Victory for Future of Food'

"This must not, and will not, be how we grow our food," Earthjustice attorney says of toxic, pesticide-driven cycle. (Photo: Chris H./flickr/cc)

Citing "new information" on the herbicide's environmental toxicity, the U.S. Environmental Protection Agency (EPA) on Wednesday announced it will revoke its controversial approval of Dow's Enlist Duo after determining that its combination of chemicals may be significantly more harmful than initially believed.

"With this action, EPA confirms the toxic nature of this lethal cocktail of chemicals, and has stepped back from the brink," said Paul Achitoff, managing attorney for Earthjustice, one of several groups that sued the EPA for its failure to consider the impacts of Enlist Duo on threatened and endangered plants and animals protected under the Endangered Species Act.

As Common Dreams has reported, Dow AgroScience's herbicide combines glyphosate, found in Monsanto's Roundup, and 2,4-D, the key ingredient in Agent Orange. The EPA had approved its use in Illinois, Indiana, Iowa, Ohio, South Dakota, Wisconsin, Arkansas, Kansas, Louisiana, Minnesota, Missouri, Mississippi, Nebraska, Oklahoma and North Dakota, and had intended to approve it in additional areas in the near future.

"Glyphosate is a probable carcinogen and is wiping out the monarch butterfly," Achitoff said, while "2,4-D also causes serious human health effects, and the combination also threatens endangered wildlife. This must not, and will not, be how we grow our food."

The filing was posted in a Ninth Circuit Court of Appeals case filed by the Natural Resources Defense Council and the Center for Food Safety against Dow AgroSciences and EPA over the regulatory approval of Enlist Duo.

In the case filing, EPA effectively agreed with the environmental groups to remand the case back to the district court and to vacate its own registration decision on Enlist Duo until EPA officials better understand the possible environmental impacts of the two herbicides.

According to the Wall Street Journal, the EPA said "new information, which Dow hadn’t provided to the agency before Enlist Duo’s approval, could lead it to a 'different decision' about restrictions for farmers' use of the herbicide."
\
The agency document (pdf) states that the new information regards "potential synergistic effects between the two ingredients on non-target plants" and that the "EPA cannot be sure, without a full analysis of the new information, that the current registration does not cause unreasonable effects to the environment."

Scientists warned ahead of the EPA's approval that the Enlist Duo "crop system" would only foster expanded weed resistance to the pesticides, creating a cycle of escalating toxicity.

With such warnings in mind, "Enlist Duo shouldn't have been given the green light in the first place," Pesticide Action Network executive director Judy Hatcher said on Wednesday. "Too often, [genetically engineered] seeds and the herbicides designed to accompany them are rushed to market without thorough evaluation of their real-world impacts on community health and farmer livelihoods."

Still, green groups celebrated the EPA's turnaround on Enlist Duo, with Center for Food Safety senior attorney George Kimbrell calling it "a huge victory for the environment and the future of our food."

Now, he said, "We will remain vigilant to ensure industry does not pressure the agency into making the same mistake in the future."
Posted by arclein at 12:00 AM