At Least 15,000 people Killed Every Year by Cancer Treatments 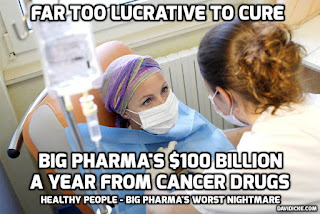 It is long overdue for someone to throw up a real number that spells out just how many are in fact sped to their grave by the attempted treatments.  We also need to understand that merely postponing death briefly while ensuring it is not a good plan.


Life is precious but only if you are healthy.  If you are suffering and death is inevitable, acceptance becomes possible and an excellent choice.  Frantically taking your doctor's distorted guidance is a lousy choice and needs to be rethought.


We need to address healing.  The first step may be meditation and spiritual counseling.  Please note that prayer done properly happens to be effective meditation.  All this conditions the mind to separate itself from the disease and to address support protocols that can help.  We have discussed many therapeutic protocols here.


Chemotherapy worse than ISIS? At least 15,000 people killed every year by cancer treatments

(NaturalNews) It's the gift that keeps on giving: ISIS, and the constant terror threat from this extremist group that acts as an enabler for the federal government to perpetually reinforce its security, surveillance, military, police state, and privacy invasion apparatus across the nation and throughout the world. But did you know that there's an even bigger threat lurking at your local oncologist's office?

Chemotherapy, the bread and butter of the cancer industry's multi-billion-dollar sick care system, kills far more people every year than ISIS terrorists, according to Iraqi-British politician Maurice Saatchi. Saatchi's wife, who was diagnosed with ovarian cancer, died in 2011 after being treated with the chemical poison, which remains the standard protocol for treating cancer throughout the West.

After consulting with multiple senior medical professionals, Saatchi came to the stark realization that deaths from cancer treatment are quite common – one in 10 cancer patients, he was told, die not from their cancers but from their prescribed treatments. Both chemotherapy and radiation treatments weaken patients' immune systems to such a degree that their bodies are unable to both fight the cancer and support life.

The result is that cancer patients end up dying from infections that could have been prevented had their immune systems not been damaged by chemical poisons and radiation, which indiscriminately destroy all cells, both healthy and malignant.

"What we do know is that the cancer drugs do such damage to the immune system that the patient is helpless to resist fatal infections like E.coli or MRSA or septicemia," stated Saatchi, noting that some 15,000 cancer patients die every single year as a result of conventional cancer treatments.

Many people aren't aware of this fact, he added, because the World Health Organization's (WHO) Office for National Statistics only docments "the single underlying cause of death," which of course it simply records as "cancer." But the truth is that cancer often isn't the cause of cancer patients' early deaths.

For years, Natural News and other alternative media outlets have been warning readers that cancer treatments are often more threatening than cancer itself! And we've been called kooky conspiracy theorists and worse for publishing this truth, though now the tables are starting to turn.

Mainstream politicians, medical professionals, doctors, academic researchers, scientists and others are beginning to come out of the woodwork to admit what we've been saying all along – that something needs to change, and quickly, if we're going to make any real strides towards actual cancer prevention and curative medicine.

"We don't want patients being treated like mice, but the current state of law on medical negligence requires [doctors] to stick to the standard, well-worn procedure," Saatchi added, noting that oncologists' hands are tied by political correctness and pharmaceutical corruption, disallowing them the freedom to explore other cancer treatment modalities like the Gerson Method, for instance, or Phoenix Tears cannabis preparations.

Saatchi recently introduced a piece of legislation in the House of Lords entitled the "Medical Innovation Bill" that would allow doctors in the U.K. to custom-craft innovative cancer treatments without fear of retribution by government authorities or special interest groups.

"We want responsible innovation," he told legislators. "My motive for this bill is exactly the same as what the relatives of the bereaved say on the news every night - if I can help one other person from a fate like this that would be a blessing.

http://www.naturalnews.com/052161_chemotherapy_cancer_treatments_ISIS_terrorism.html#ixzz3t9SDKhkU
Posted by arclein at 12:00 AM