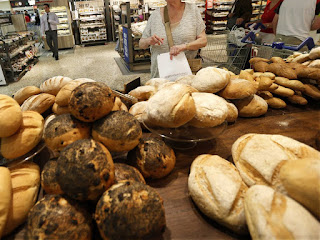 We have plenty of issues regarding our grain supply that need to be rigorously addressed, not least that we need to eat modest amounts.  Our synthesized bread is a powerful diabetes promoter and almost every chance possible this is slipped into our diets.

Our other critical enemy is sugar and that is also slipped into our food chain every chance.

Neither of these products are helpful and both demand regulatory control in order to allow our taste buds to properly adjust.  Otherwise they are both naturally addictive and no manufacturer is going to vote himself out of business.
.

.
Researchers Who Provided Key Evidence For Gluten Sensitivity Have Now Thoroughly Shown That It Doesn't Exist

In one of the best examples of science working, a researcher who provided key evidence of (non-celiac disease) gluten sensitivity recently published follow-up papers that show the opposite.

The first follow-up paper came out last year in the journal Gastroenterology. Here's the backstory that makes us cheer:

The study was a follow up on a 2011 experiment in the lab of Peter Gibson at Monash University. The scientifically sound — but small — study found that gluten-containing diets can cause gastrointestinal distress in people without celiac disease, a well-known autoimmune disorder triggered by gluten.

They called this non-celiac gluten sensitivity.

Gluten is a protein composite found in wheat, barley, and other grains. It gives bread its chewiness and is often used as a meat substitute. If you've ever had "wheat meat," seitan, or mock duck at a Thai restaurant, that's gluten.

Gluten is a big industry: 30% of people want to eat less gluten. Sales of gluten-free products are estimated to hit $15 billion by 2016.

Although experts estimate that only 1% of Americans — about 3 million people — suffer from celiac disease, 18% of adults now buy gluten-free foods.

Since gluten is a protein found in any normal diet, Gibson was unsatisfied with his finding. He wanted to find out why the gluten seemed to be causing this reaction and if there could be something else going on. He therefore went to a scientifically rigorous extreme for his next experiment, a level not usually expected in nutrition studies.

For a follow-up paper, 37 self-identified gluten-sensitive patients were tested. According to Real Clear Science's Newton Blog, here's how the experiment went:

Subjects would be provided with every single meal for the duration of the trial. Any and all potential dietary triggers for gastrointestinal symptoms would be removed, including lactose (from milk products), certain preservatives like benzoates, propionate, sulfites, and nitrites, and fermentable, poorly absorbed short-chain carbohydrates, also known as FODMAPs. And last, but not least, nine days worth of urine and fecal matter would be collected. With this new study, Gibson wasn't messing around.

The subjects cycled through high-gluten, low-gluten, and no-gluten (placebo) diets, without knowing which diet plan they were on at any given time. In the end, all of the treatment diets — even the placebo diet — caused pain, bloating, nausea, and gas to a similar degree. It didn't matter if the diet contained gluten. (Read more about the study.)

"In contrast to our first study … we could find absolutely no specific response to gluten," Gibson wrote in the paper. A third, larger study published this month has confirmed the findings.

It seems to be a "nocebo" effect — the self-diagnosed gluten sensitive patients expected to feel worse on the study diets, so they did. They were also likely more attentive to their intestinal distress, since they had to monitor it for the study.

On top of that, these other potential dietary triggers — specifically the FODMAPS – could be causing what people have wrongly interpreted as gluten sensitivity. FODMAPS are frequently found in the same foods as gluten. That still doesn't explain why people in the study negatively reacted to diets that were free of all dietary triggers.

You can go ahead and smell your bread and eat it too. Science. It works.
Posted by arclein at 12:00 AM