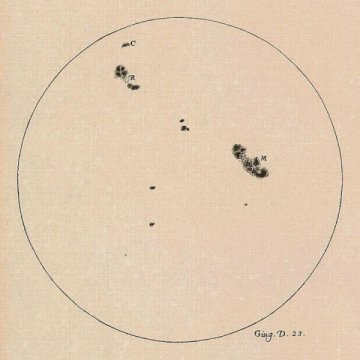 More to the point the sunspot activity level for each eleven year cycle is pretty well constant within a probable distribution range.  Thus sunspot activity at least cannot be linked to real or imagined trend lines.

The early low took place at the infancy of solar observation and may simply be caused by missed data.  Right now we do not know.  However the constancy since does suggest that they need to be tossed out until we know better.

Very interesting and a lot of speculation just got trashed.  Further adjustments are coming.

The Sunspot Number is a crucial tool used to study the solar dynamo, space weather and climate change. It has now been recalibrated and shows a consistent history of solar activity over the past few centuries. The new record has no significant long-term upward trend in solar activity since 1700, as was previously indicated. This suggests that rising global temperatures since the industrial revolution cannot be attributed to increased solar activity.

A drawing of the Sun made by Galileo Galilei on 23 June 1613 showing the positions and sizes of a number of sunspots. Galileo was one of the first to observe and document sunspots.
Credit: The Galileo Project/M. Kornmesser

The Maunder Minimum, between 1645 and 1715, when sunspots were scarce and the winters harsh, strongly suggests a link between solar activity and climate change. Until now there was a general consensus that solar activity has been trending upwards over the past 300 years (since the end of the Maunder Minimum), peaking in the late 20th century -- called the Modern Grand Maximum by some [1].

This trend has led some to conclude that the Sun has played a significant role in modern climate change. However, a discrepancy between two parallel series of sunspot number counts has been a contentious issue among scientists for some time.

The two methods of counting the sunspot number -- the Wolf Sunspot Number and the Group Sunspot Number [2] -- indicated significantly different levels of solar activity before about 1885 and also around 1945. With these discrepancies now eliminated, there is no longer any substantial difference between the two historical records.

The new correction of the sunspot number, called the Sunspot Number Version 2.0, led by Frédéric Clette (Director of the World Data Centre [WDC]-SILSO), Ed Cliver (National Solar Observatory) and Leif Svalgaard (Stanford University, California, USA), nullifies the claim that there has been a Modern Grand Maximum.

The results, presented at the IAU XXIX General Assembly in Honolulu, Hawai`i, today, make it difficult to explain the observed changes in the climate that started in the 18th century and extended through the industrial revolution to the 20th century as being significantly influenced by natural solar trends.

The sunspot number is the only direct record of the evolution of the solar cycle over multiple centuries and is the longest scientific experiment still ongoing.

The apparent upward trend of solar activity between the 18th century and the late 20th century has now been identified as a major calibration error in the Group Sunspot Number. Now that this error has been corrected, solar activity appears to have remained relatively stable since the 1700s [3].

The newly corrected sunspot numbers now provide a homogenous record of solar activity dating back some 400 years. Existing climate evolution models will need to be reevaluated given this entirely new picture of the long-term evolution of solar activity. This work will stimulate new studies both in solar physics (solar cycle modelling and predictions) and climatology, and can be used to unlock tens of millennia of solar records encoded in cosmogenic nuclides found in ice cores and tree rings. This could reveal more clearly the role the Sun plays in climate change over much longer timescales.

The new data series and the associated information are distributed from WDC-SILSO [4].

[1] Note that the trend being discussed here is over longer periods than the familiar 11-year solar cycle.

[2] The Wolf Sunspot Number (WSN) ranks as the oldest time series in solar terrestrial physics still in use today, having remained untouched for over 160 years. Established by Rudolf Wolf in 1856, the method is based on both the number of groups of sunspots and the total number of spots within all the groups.

In 1994 the question began to arise as to whether the WSN was the correct method of constructing a historical sunspot record. The limitations of early telescopes meant that it was easy for smaller spots to be missed. With this in mind, a new index was established in 1998: the Group Sunspot Number (GSN), which is easier to measure and goes all the way back to the measurements done by Galileo, Thomas Harriot and Scheiner. This index was based solely on the number of sunspot groups. Establishing this system performed a valuable service by finding and digitising many sunspot observations not known or used by Wolf and his successors, effectively doubling the amount of data available before Wolf's tabulations.

Unfortunately, the two series disagreed seriously before about 1885, and the GSN has not been maintained since the 1998 publication of the series. The GSN also revealed a pattern of continually rising solar activity, beginning in the 18th century and culminating in a Modern Grand Maximum in the latter part of the 20th century, which Wolf's method does not suggest. Overall, the discrepancies were too large and the applications (solar dynamo, climate change, space climate) too prominent for the two systems to continue to exist in disagreement.

[3] They remain within a constant amplitude range for the normal 11-year cycle.

[4] WDC-SILSO is located in Brussels and is the current curator of the Sunspot Number time series and associated data products. It is a member of the World Data System of the International Council for Science (ICSU), dedicated to the preservation and distribution of large and/or long-duration reference datasets in all domains of science.