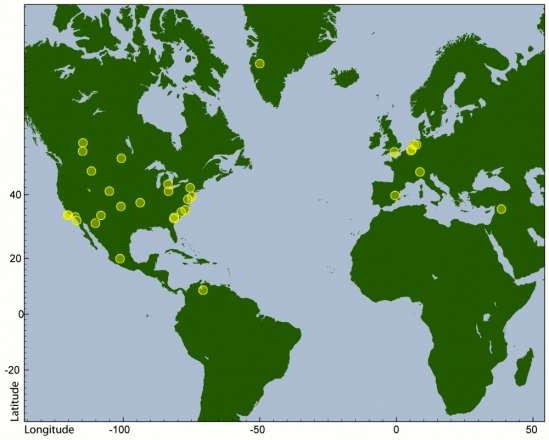 I published on this blog in 2007, my text on the Pleistocene Nonconformity.  In fact i launched my blog in order to publish that particular chapter from my manuscript Paradigms Shift.  since then i have had the pleasure of watching the science catch up to the paradigm.

What no one has truly understood yet is that the impact was a targeted event designed to shift the crust thirty degrees south along the longitude of Hudson Bay.  This ended the Great Northern Ice Age permanently.  We are now good for millions of years..  The shift allowed the Gulf of Mexico to be shifted into the tropics to become a natural heat pump into the Arctic.

Getting your mind around all the implications of what i just said will be a challenge to science generally and most will make asses of themselves attempting to disown the evidence.  Oh well.  I am just pleased that so far i have gotten it right.  No one finds evidence unless someone tells you where to look and that is what we did here.  This event also happens to be confirmation of the conjecture that comet dust is elemental carbon.

More recently i had direct confirmation describing the crustal shift from my key conduit to the spiritual world or more correctly the second tier of matter.  What was described was exactly my expectations independent of any foreknowledge.  It represents a second data point which also includes a report describing correctly the Fall from Eden 45,000 years ago.  That event stopped mind to mind communication and our natural ability to command wildlife.

What was reported was a vision as from a high safe place in which the earth is continuously shaking.  thousands of humans were seen dying and mountains were seen crumbling.  There was a sense of difference regarding the observed geology that was difficult to define but certainly expected. My observer was reassured that this was all in the past and of no future threat.  When i described the Pleistocene Nonconformity and the crustal shift that observer received a powerful confirmation that this was correct.

The good news is that my reconstruction of the past 45,000 years continues to hold up and the state of man prior to that is also well understood.  The remnants of that population include the Bushmen and the Aboriginals of Australia...
.

While I was researching my forthcoming book "Magicians of the Gods" ( published in the US on 10 November and available for pre-order here: http://amzn.to/1KkjrJl), I came across what I can only describe as a conspiracy to mislead and misdirect the public concerning the truth about our past. Over the past eight years a group of more than 30 leading scientists have brought together a mass of compelling evidence that a comet hit the earth 12,800 years ago, setting in motion a global cataclysm on a scale unprecedented since the extinction of the dinosaurs. As I report in Magicians, massive efforts, have been made by the controlling powers in our society to discredit the science that proves the comet impact, to downplay it in every way possible, and to "brush it under the carpet". But still the new evidence keeps coming in -- I provided a link to the latest research paper yesterday, and for those who missed it, here it is again: http://phys.org/news/2015-07-cataclysmic-event-age.html.

Despite ongoing attempts at suppression, the cat is out of the bag and cannot be forced back. Indeed the growing understanding of the true, horrendous scale of the extinction-level cataclysm that occurred on our planet 12,800 years ago, in the backyard of everything that we think of as history, is the single most important, and potentially most fruitful, development in the study of our past for more than a century. It is set to change EVERYTHING that we have hitherto been taught was true about the origins of civilization. Historians and archaeologists have not even begun to take the implications of the new scientific findings fully on board and many of them will, no doubt, continue to make the absurd and arrogant claim that a lost civilization 'just isn't possible'. Magicians of the Gods refutes such claims with overwhelming evidence and reveals the new paradigm that is struggling to be born.

New research by UC Santa Barbara geologist James Kennett and an international group of investigators has narrowed the date to a 100-year range, sometime between 12,835 and 12,735 years ago. The team's findings appear today in the Proceedings of the National Academy of Sciences.
The researchers used Bayesian statistical analyses of 354 dates taken from 30 sites on more than four continents. By using Bayesian analysis, the researchers were able to calculate more robust age models through multiple, progressive statistical iterations that consider all related age data.
"This range overlaps with that of a platinum peak recorded in the Greenland ice sheet and of the onset of the Younger Dryas climate episode in six independent key records," explained Kennett, professor emeritus in UCSB's Department of Earth Science. "This suggests a causal connection between the impact event and the Younger Dryas cooling."
In a previous paper, Kennett and colleagues conclusively identified a thin layer called the Younger Dryas Boundary (YDB) that contains a rich assemblage of high-temperature spherules, melt-glass and nanodiamonds, the production of which can be explained only by cosmic impact. However, in order for the major impact theory to be possible, the YDB layer would have to be the same age globally, which is what this latest paper reports.
"We tested this to determine if the dates for the layer in all of these sites are in the same window and statistically whether they come from the same event," Kennett said. "Our analysis shows with 95 percent probability that the dates are consistent with a single cosmic impact event."
All together, the locations cover a huge range of distribution, reaching from northern Syria to California and from Venezuela to Canada. Two California sites are on the Channel Islands off Santa Barbara.
However, Kennett and his team didn't rely solely on their own data, which mostly used radiocarbon dating to determine date ranges for each site. They also examined six instances of independently derived age data that used other dating methods, in most cases counting annual layers in ice and lake sediments.
Two core studies taken from the Greenland ice sheet revealed an anomalous platinum layer, a marker for the YDB. A study of tree rings in Germany also showed evidence of the YDB, as did freshwater and marine varves, the annual laminations that occur in bodies of water. Even stalagmites in China displayed signs of abrupt climate change around the time of the Younger Dryas cooling event.
"The important takeaway is that these proxy records suggest a causal connection between the YDB cosmic impact event and the Younger Dryas cooling event," Kennett said. "In other words, the impact event triggered this abrupt cooling.
"The chronology is very important because there's been a long history of trying to figure out what caused this anomalous and enigmatic cooling," he added. "We suggest that this paper goes a long way to answering that question and hope that this study will inspire others to use Bayesian statistical analysis in similar kinds of studies because it's such a powerful tool."