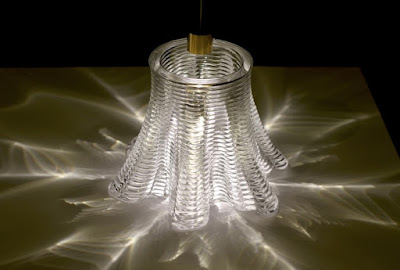 This is a really good beginning that makes me finally bullish on 3D print technology.  From this we leap quickly into metglas and this produces an array of characteristics otherwise difficult to manufacture.

It is taking years to advance these technologies ,but that is prehaps inevitable.  We are certainly getting there.

Sooner that later we must peroduce a real star ship and we need all of this..

Last Updated: August 24, 2015 8:40 am
http://www.theepochtimes.com/n3/1733198-new-3d-glass-printer-is-a-lot-like-what-they-did-4000-years-ago/
In the world of 3-D printing, plastic has been the base material of choice for most purposes. Metal, ceramics, and graphite are also used, but on a smaller scale. Now, that list is being expanded to include transparent glass.

The basic concept of 3-D printing with glass is the same as with other materials: the glass is heated until it becomes a liquid, and is then extruded in 0.4 inch thick filaments through a software-controlled nozzle.

Ironically, the production of glassware by coiling strands of molten glass is a throwback to the earliest methods of glass-making that originated in Mesopotamia more than 4,000 years ago, before glass-blowing and molding was discovered.

The production of glassware by coiling strands of molten glass is a throwback to the earliest methods of glass-making
The manufacturing of glass products through extrusion is already in use in different industries, but researchers at MIT were only recently able to come up with a way to produce optically transparent glass.

The researchers had to overcome a number of challenges posed by the qualities of glass: they relied on gravity to pull the molten glass out of a crucible, which was heated to 1,800 degrees Fahrenheit, so the diameter of the filaments were inconsistent as the pressure changed; the glass would often stick to the nozzle instead of the preceding layer; and the glass would often cool prematurely.

To make things work, the researchers had to switch to a ceramic nozzle and keep the production in a temperature controlled chamber to maintain even cooling.

In addition, the ceramic nozzle has to be manually shut off with compressed air as a cooling agent and turned on with a propane torch.

Caustic patterns of a 3-D printed glass structure. (Andy Ryan)
As a demonstration of the method, the researchers produced a number of decorative glassware, mostly vases of various shapes and colors, a selection of which will be exhibited at the Cooper Hewitt Design Museum, located in New York City, in 2016.

As with plastic, 3-D printing would give hobbyists and enthusiasts the capability to toy with their own designs for glassware, and empower suppliers to produce objects on a nonindustrial scale. Glass bottles, for instance, are manufactured with cast-iron molds, encouraging standardization in shape and design of the products.

“Additional complexity in product scale is now possible without negatively affecting its production rate, cost, or quality,” the researchers wrote in a paper detailing their invention.

The biggest breakthrough accomplished by this discovery may ultimately be aesthetic. The caustic light patterns created by glass are often things of remarkable beauty, one that could be greatly enhanced by calculated distortions designed to project shapes and figures.

If the thickness of the filaments appear rather crude and inelegant, that’s because the products serve only as a proof of concept that 3-D printing of transparent glass is possible. As the technology is refined, the diameter of the extrusion will become smaller if needed, and the designs more complex.

The researchers’ finished products were limited by a number of resource restraints. The reliance on gravity as the pulling mechanism forced the crucible to be constantly filled. A plunger or compressed air is being considered as a replacement for that force. Different materials are also being considered for the nozzle, and a disposable foil has been considered.

The printer’s software also faces needs to undergo consolidation of the several programs that are being run simultaneously, so that there’s more control of the process in real time.
Posted by arclein at 12:00 AM