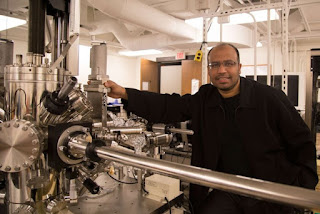 Again any such particle or quasi particle which is scaled at the electron will in terms of my work sport around 1200 axis representing around 600 fundamental particle pairs or what we would recognize as neutral neutrinos.

This allows for a finite set of stable variations unique to the scale number of 620 pairs and without simulation it is impossible to narrow down the effective options let alone the gravitational effect which can plausibly be canceled out in a configuration.  A better name here would be exotic electrons to at least keep the known scale.

We ourselves have been playing around the edges of gravity and it appears likely that we will do a lot even in the third tier of matter.  We have been encouraged.
.
Massless particle discovery could radically accelerate electronics

Scientists have discovered the Weyl fermion. A particle theorized more than 85 years ago, it is claimed to be able to create completely massless electrons and may open up whole new areas of high-speed electronics and quantum computing (Credit: Danielle Alio/Princeton University)
Image Gallery (3 images)

An exotic particle theorized more than 85 years ago has finally been discovered. Dubbed the "Weyl fermion", it is a strange but stable particle that has no mass, behaves as both matter and anti-matter inside a crystal, and is claimed to be able to create completely massless electrons. Scientists believe that this new particle may result in super-fast electronics and significant inroads into novel areas of quantum computing.

There are two types of particles that make up the universe and everything in it: fermions and bosons. In simple terms, fermions are all the particles that make up matter (for example, electrons), and bosons are all the particles that carry force (for example, photons). Ordinarily, fermions such as electrons can collide with each other, losing energy, and no two fermions can share the same state at the same position at the same time. Weyl fermions being massless, however, have no such restrictions.
Weyl fermions were first mooted in 1929 by physicist and mathematician Hermann Weyl, who theorized that massless fermions able to carry an electric charge could exist. Without mass, he believed, electrons created from Weyl fermions would be able to move electric charge in a circuit much more quickly than ordinary electrons. In fact, according to this latest research, electric current carried by Weyl electrons in a test medium is able to move at least twice as fast as that carried by electrons in graphene and at least 1,000 times faster than in ordinary semiconductors.

The international team led by Princeton University scientists used the Princeton Institute for the Science and Technology of Materials (PRISM) and Laboratory for Topological Quantum Matter and Spectroscopy to look into many dozens of crystal arrangements before alighting upon the asymmetrical tantalum arsenide crystal (a semi-metal that has the properties of both a conductor and an insulator) as a prime candidate in the hunt for the theorized particle.

Over-sized crystals of the tantalum arsenide were first placed in a scanning tunneling spectromicroscope cooled to near absolute zero to determine if they matched the hypothetical specifications for accommodating a Weyl fermion. Then, once the crystals had passed that test, the team took them to the Lawrence Berkeley National Laboratory in California where high-energy photon beams fired from a particle accelerator were shone through them. This test finally confirmed the presence of the existence of the long sought after Weyl fermion.

"The nature of this research and how it emerged is really different and more exciting than most of other work we have done before," said Su-Yang Xu, a postdoctoral research associate at Princeton. "Usually, theorists tell us that some compound might show some new or interesting properties, then we as experimentalists grow that sample and perform experiments to test the prediction. In this case, we came up with the theoretical prediction ourselves and then performed the experiments. This makes the final success even more exciting and satisfying than before."

As a quasiparticle – that is, a particle that exists inside a solid (in this instance) but acts as if it were a weakly interacting particle in free space – the Weyl fermion is massless and has a high degree of mobility. This is because, as the particle's spin is both in the same direction as its motion (known in physics as "right-handed") and in the opposite direction in which it moves ("left-handed"), it is able to traverse through and around obstacles that impede ordinary electrons.

"It's like they have their own GPS and steer themselves without scattering," said Princeton University physicist Zahid Hasan."They will move and move only in one direction since they are either right-handed or left-handed and never come to an end because they just tunnel through. These are very fast electrons that behave like unidirectional light beams and can be used for new types of quantum computing."

Weyl originally posited his fermion as part of an alternate model to the theory of relativity proposed by his associate Albert Einstein. And, though Weyl's hypothesis lost out to Einstein’s, the idea of his theoretical particle continued to tantalize physicists for many years afterward. However, as a merely "theoretical" particle, even when inklings of the Weyl fermion were uncovered over the decades, they were mistakenly thought to be evidence of neutrinos. In hindsight, the evidence was actually for Weyl fermions, for in 1998 neutrinos were actually discovered to have a small amount of mass.

"People figured that although Weyl's theory was not applicable to relativity or neutrinos, it is the most basic form of fermion and had all other kinds of weird and beautiful properties that could be useful," said Hasan. "After more than 80 years, we found that this fermion was already there, waiting. It is the most basic building block of all electrons. It is exciting that we could finally make it come out following Weyl's 1929 theoretical recipe."

The results of this work were recently published in the journal Science.
Posted by arclein at 12:00 AM