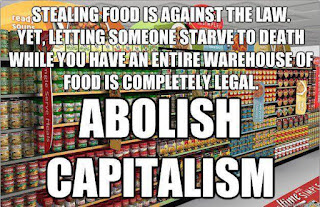 In two centuries we have learned a great deal about managing an effective economy and this item argues a comparison between ideal socialism and ideal capitalism. As neither has turned out to be possible or even plausible it is an empty exercise.  What has turned out to be possible and plausible is a form of regulated capitalism combined with a monetary system in which a significant portion of expenditures are used to provide a secure financial base for all citizens.

Otherwise you are arguing for a discount economy in which a moments weakness will destroy the individual.  We see some of that but only because of economic ignorance.  It can and perhaps will be someday properly repaired.
The real problem with Capitalism is that it is not properly defined on a viable intellectual basis but in terms of the single metric of profit.


Arguments for socialism are based logical fallacies and historical ignorance

Look upon this meme, ye capitalists, and weep.


Socialists are people who either 1) are badly misinformed about social scientific matters, or 2) make a common philosophical mistake that I’ve dubbed the “Cohen Fallacy,” in honor of G.A. Cohen.


Regarding 1: Here is a ranking of all countries by how capitalist they are as of 2011. Where are the starving people generally located? Is it in the most capitalist countries?

By the way, here’s the trendline in absolute poverty around the world, thanks to globalization:

Regarding 2: I suspect what most socialists have in mind is an argument like this:


Sure, in realistic cases of socialism, such as the forms of socialism practiced in the 20th century, we had mass famine and forced starvation.


But in ideal socialism, the form of socialism I endorse, people would all love each other, share, and care! And so no one would starve. Ideal socialism is superior from a moral point of view to capitalism as we actually find it.


The problem with this argument, as I explained in Why Not Capitalism?, is that this is a bad argument:


As I argue in Why Not Capitalism?, ideal capitalism is morally superior (from a hard left-wing point of view) to ideal socialism. And I don’t see it even as debatable at this point that realistic capitalism, for all its flaws, is superior to realistic socialism.


Socialists might retort that capitalism makes us worse people while socialism encourages virtue and kindness. However, that’s a testable empirical claim. People like Herbert Gintis and Joseph Henrich, among others, have tested it, and it turns out to be the opposite of the truth.


Jason Brennan is Assistant Professor of Strategy, Economics, Ethics, and Public Policy at Georgetown University. He blogs regularly at Bleeding Heart Libertarians.
Posted by arclein at 12:00 AM