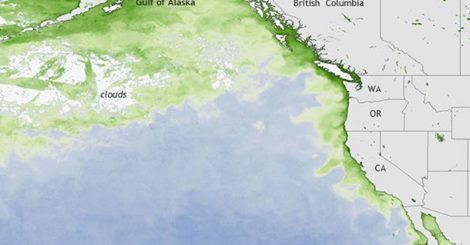 looking at the map it is certainly impressive.  however it also appears to be a one off that plausibly occurs every few decades.  Now improved mapping is defining the actual size and this year it is large enough to be continuous.

So much ink is spillt attempting to define patterns along the Pacific coast, one wonders when they will take their lesson and simply roll with what nature throws our way.  Anything arriving on our coast has already traveled half way around the earth and has had ample opportunity to be mixed and blended.

We are merely the end of the journey and this y.ear a swatch of warm water gave us a robust algae bloom.

Oceanographers are studying whether climate change is contributing to an unprecedented bloom of toxic algae that spans the Pacific Coast of the United States and Canada, raising health concerns and leading to multimillion-dollar income losses from closed fisheries.The bloom, which emerged in May, stretches thousands of miles from the Channel Islands off the coast of Southern California to Alaska's Aleutian Islands and has surprised researchers by its size and composition.

"It's just lurking there," Vera Trainer, research oceanographer with the Northwest Fisheries Science Center in Washington state, told Reuters on Thursday. "It's the longest lasting, highest toxicity and densest bloom that we've ever seen."

The center is a branch of the National Oceanic and Atmospheric Administration (NOAA).

The runaway bloom of pseudo-nitzschia algae is believed to have been spawned in part by unusually warm ocean water along the West Coast that scientists have dubbed "the blob."

Researchers have yet to determine whether longer-term global climate change from rising levels of heat-trapping greenhouse gas emissions are playing a role, but the massive bloom may be a harbinger of things to come in any case, she said.

"Whether this is or is not due to climate change, I think it provides a window to the future of what we could see happen under climate change scenarios," Trainer said.

The algae bloom has produced a profusion of a chemical compound called domoic acid, which accumulates in shellfish, anchovies and sardines exposed to it, and acts as a neurotoxin on higher orders of marine life, such as sea lions and birds, that feed on them.

Researchers are investigating whether the bloom is linked to several suspicious marine mammal deaths, including a humpback whale found dead in Washington state's Grays Harbor on Monday, Trainer said.

NOAA said contaminated seafood can also cause amnesic shellfish poisoning in humans, a serious illness that can lead to short-term memory loss, brain damage and even death. The agency last month awarded Washington state an $88,000 grant to monitor and analyze the bloom, which has prompted fishery closures in the state.

NOAA said in a statement that the closure of a Washington state razor clam fishery resulted in $9.2 million in lost income and has also damaged the state's $84 million commercial crabbing industry.
(Reporting by Curtis Skinner; Additional reporting by Courtney Sherwoo
Posted by arclein at 12:00 AM