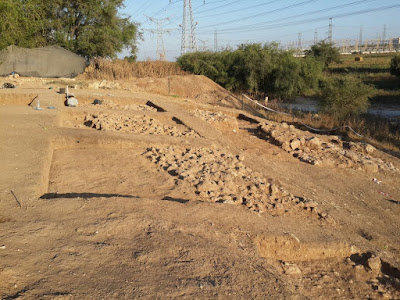 
Earlier populations had established trade factories throughout the Mediterranean in the preceding thousand years and palace economies had emerged.  Yet 1159 BCE brought something different and that was a sudden movement of peoples out of northern Europe particularly.  We all recall the Dorians that overwhelmed the Mycenaeans.


This also cleanly dates the end of the Philistine world as well in 830 BCE although it was absorbed by the Assyrians and then the Babylonians..  The time span is around four hundred years which is significant. The Hebrews were in active contact throughout almost until the Babylonians struck.   I suspect then that any population migrated into Egypt in particular besides merely integrating with other populations in the Levant.

The Ackerman Family Bar-Ilan University Expedition to Gath, headed by Prof. Aren Maeir, has discovered the fortifications and entrance gate of the biblical city of Gath of the Philistines, home of Goliath and the largest city in the land during the 10th-9th century BCE, about the time of the "United Kingdom" of Israel and King Ahab of Israel.


The excavations are being conducted in the Tel Zafit National Park, located in the Judean Foothills, about halfway between Jerusalem and Ashkelon in central Israel. This is a view of the remains of the Iron Age city wall of Philistine Gath [Credit: Prof. Aren Maeir, Director, Ackerman Family, Bar-Ilan University Expedition to Gath]


Prof. Maeir, of the Martin (Szusz) Department of Land of Israel Studies and Archaeology, said that the city gate is among the largest ever found in Israel and is evidence of the status and influence of the city of Gath during this period. In addition to the monumental gate, an impressive fortification wall was discovered, as well as various building in its vicinity, such as a temple and an iron production facility.


These features, and the city itself were destroyed by Hazael King of Aram Damascus, who besieged and destroyed the site at around 830 BCE. The city gate of Philistine Gath is referred to in the Bible (in I Samuel 21) in the story of David's escape from King Saul to Achish, King of Gath.


Aerial view of the monumental city gate and fortification of the biblical city of Philistine Gath (home of Goliath) on August 4, 2015 [Credit: Griffin Aerial Imaging] Now in its 20th year, the Ackerman Family Bar-Ilan University Expedition to Gath, is a long-term investigation aimed at studying the archaeology and history of one of the most important sites in Israel.


Tell es-Safi/Gath is one of the largest tells (ancient ruin mounds) in Israel and was settled almost continuously from the 5th millennium BCE until modern times. The archaeological dig is led by Prof. Maeir, along with groups from the University of Melbourne, University of Manitoba, Brigham Young University, Yeshiva University, University of Kansas, Grand Valley State University of Michigan, several Korean universities and additional institutions throughout the world.


Among the most significant findings to date at the site: Philistine Temples dating to the 11th through 9th century BCE, evidence of an earthquake in the 8th century BCE possibly connected to the earthquake mentioned in the Book of Amos I:1, the earliest decipherable Philistine inscription ever to be discovered, which contains two names similar to the name Goliath; a large assortment of objects of various types linked to Philistine culture; remains relating to the earliest siege system in the world, constructed by Hazael, King of Aram Damascus around 830 BCE, along with extensive evidence of the subsequent capture and destruction of the city by Hazael, as mentioned in Second Kings 12:18; evidence of the first Philistine settlement in Canaan (around 1200 BCE); different levels of the earlier Canaanite city of Gath; and remains of the Crusader castle "Blanche Garde" at which Richard the Lion-Hearted is known to have been.