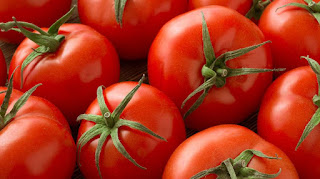 This possibly will even work in your kitchen when you have tasteless tomatoes.  Five minutes in 125 degree water and a cool down to serve is practical for anyone.

This does not suggest that it will work but we all need to try it to see if it helps.  winter is coming soon enough.

What it does mean though is that industry will be able to adjust their current process to produce better flavor and that is certainly welcome  It is even a simple trick to implement.

Store bought tomatoes are notorious for having an insipid taste, so a team of scientists led by the US Department of Agriculture (USDA) is working on new methods to ensure that future supermarket tomatoes have more flavor. The research suggests this can be achieved by a simple, inexpensive alteration to conventional processing – a hot bath.

The distinct flavor of tomatoes is due to a cocktail of chemicals produced by the fruits as they ripen, but, according to the team that includes the USDA, the Agricultural Research Service, and the University of Florida, conventional storage methods inhibit these flavors. If tomatoes seem more flavorsome when bought from a farm stand, that's because they're being sold in the ideal condition – fully ripe and immediately after picking.

However, commercially grown tomatoes need to be shipped hundreds, if not thousands of miles to reach market along with delays in packing and unpacking. Shipping ripe tomatoes over any distances risks unacceptable levels of spoilage, so the tomatoes are picked green, treated with ethylene gas to induce ripening, and then chilled for shipping.

According to team leader Jinhe Bai, this chilling prevents flavor compounds, such as 6-methyl-5-hepten-2-one, 2-methylbutanal, and 2-phenylethanol from forming and the tomatoes end up with a watery taste. To avoid this, the team added an extra step. Instead of sending Florida-grown green tomatoes straight on to chilling, the team plunged them into 125° F (52° C) water for five minutes, then cooled them to room temperature before a final chilling to between 41° and 55° F (5° and 13° C), which is the standard shipping temperature.

Compared to a control group, the team found that the treated tomatoes had more smell and flavor, as well as higher levels of flavor compounds. According to Bai, this is due to the heat treatment regulating certain ripening enzymes and activating the production of a protein that makes the tomatoes tolerant of cell decay.

The team is currently testing the technique at various stages of ripeness to see how it affects flavor compound production.

Bai says the next step is to determine which method is the most effective before offering it to food processing firms. In addition, they're trying alternatives to hot water, such as methyl salicylate (wintergreen oil), which is an anti-fungal fumigant, and 1-methylcyclopropene when the tomatoes are at the slightly riper green/pink stage to make the fruit more tolerant to cell decay when at higher storage temperatures.

The results of the study were presented at the 250th National Meeting & Exposition of the American Chemical Society (ACS).