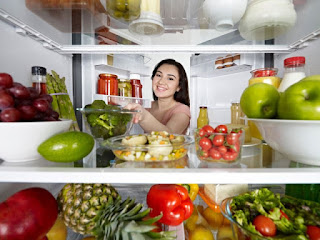 This is a well researched bit of work with plenty of good advice.  Mopst folks are not necessarily feeding a family and that makes it harder to control waste.  That is mostly because preservation is rarely practiced.

Each year, American households throw away $640 worth of food apiece, typically because they buy too much or fail to eat the leftovers.1 Many Americans succumb to grocery store marketing tactics that encourage impulse buys and larger purchases, yet when they bring such perishables home find they end up spoiling before being eaten.
A survey, conducted by the American Chemistry Council (ACC), revealed that three-quarters of Americans throw away food once a month while half do so once a week… And ACC’s survey poses just one estimate of food waste. A study by the Natural Resources Defense Council (NRDC) found Americans throw away $165 billion worth of food a year, which amounts to up to $2,200 per household.3

Most of those polled by the ACC (79 percent) were concerned with the amount of money wasted by throwing away food, while half said they felt bad tossing food when others worldwide are hungry. A much less pressing concern were the environmental impacts, which concerned just 15 percent of respondents. However, food waste is the biggest collective “item” in US landfills. To keep up with so much waste, some cities have even started composting programs to help keep it out of the garbage stream.2
The tips below, from TIME, can help you to make your food last longer so, ultimately, you waste less.4
12 Food-Saving Tips

1. Onions
Store these in a paper bag in a cool, dark place (like a garage or basement) as long as the temperature is above freezing. This will keep onions fresh for more than two weeks. Storing onions in old pantyhose is another option and may help keep them fresh for up to eight months (tie a knot in between each one to keep them separate).

2. Cheese
Hard cheeses like Parmesan can last for months if stored properly. Remove the wrapper from the store, wrap the cheese in parchment paper, and follow with a layer of foil. This will help keep in moistness. And if you notice a spot of mold on hard cheeses, don’t throw it away!
Simply cut off at least 1 inch around and below the mold spot (keep the knife out of the mold itself so it will not cross-contaminate other parts of the cheese). After trimming off the mold, re-cover the cheese in fresh wrap.

3. Berries
Berries are highly perishable, so eat them quickly for best results. If you need to extend their shelf life by a day or two, rinse them in a mix of one part vinegar to three parts water.

4. Herbs
Herbs stay fresh by trimming the stems then placing them in a glass of water, similar to a bunch of cut flowers. A paper towel or baggie placed loosely over the top, and then stored in the fridge, will help keep them even fresher.

5. Apples
Store apples in your refrigerator in the bottom drawer, which has high humidity.

6. Tomatoes
Tomatoes should be left on the counter and eaten within a couple of days. Storing them in your fridge is not an option, as they’ll lose valuable flavor. But if you’ve accidentally stored tomatoes in the fridge, don’t toss them.

Letting them sit at room temp for 24 hours before eating can help to bring back at least some of their flavor. Another option? Use up refrigerated tomatoes in a sauce recipe, where the added flavors from onions, garlic, and basil are likely to cover up the tasteless tomato.

7. Potatoes
Store potatoes in a cool dark place, and if they grow little sprouts, they’re not spoiled – simply brush them off (the potatoes may even taste sweeter as a result). When storing potatoes, keep them away from onions (this will make them spoil faster). Storing them with apples will help keep the potatoes from sprouting.

8. Greens
Heat triggers spoilage in greens, so douse them in cold water when you get home. Then, dry them in a spinner (moisture will also spur rot) and store the dried greens in an airtight bag.
Punch about 10 pin-sized holes in each side and store in the fridge. This may help your greens last four times longer than usual. Store salad greens in a bowl covered with plastic wrap, and add a paper towel to help absorb moisture.

9. Eggs
Eggs can keep for up to five weeks in your fridge. Store them in the back of your fridge where it’s cooler (not on the refrigerator door), and leave them right in the container they came in.

10. Grapes
Choose grapes that have bright green flexible stems. Those with brown or dry stems will spoil quickly and not taste as good.

11. Dairy
Heat exposure can cause dairy products to spoil faster, even if the exposure is brief. Consider bringing a cooler or insulated bag with you to the grocery store or farmer’s market so you can keep dairy items cold.

12. Meat
Store meat in the bottom drawer of your refrigerator, double-wrapped if it’s near produce (to prevent leakage).

How You Organize Your Fridge Can Keep Your Food Fresher

Certain parts of your refrigerator are colder than others while other spaces (like the shelves on the door) fluctuate in temperature. It’s important to store highly perishable foods that require cold storage in the coldest, most temperature-stable areas of your fridge to avoid spoilage and food-borne disease.

The infographic below, from Nutrition Action,5 gives a quick explanation of how to best organize your fridge for food safety. What you’ll notice is that raw meat, fish, poultry, and even leftovers – the foods that necessitate cold, stable temperatures – should be kept on the bottom shelf. This also ensures that any drippings will not contaminate other foods on their way down.

The crisper drawers, meanwhile, are intended for fruits and vegetables – but not all fruits and vegetables. Those meant for the crisper include leafy greens, melons, celery, broccoli, and apples, while others can be safely stored on the top shelf. (Apples should actually be stored away from other uncovered produce, as the ethylene gases they produce can cause other foods to spoil faster.)

As for the middle shelf, that works best for cheeses and cooked meats, while the door should be used to store condiments, including butter. You’ll also want to make sure your fridge is kept cold enough — below 40 degrees Fahrenheit, or 4 degrees Celsius.

This will ensure food safety. Also leave enough space in your fridge for cold air to circulate. If your refrigerator is too tightly packed, your food will spoil faster. 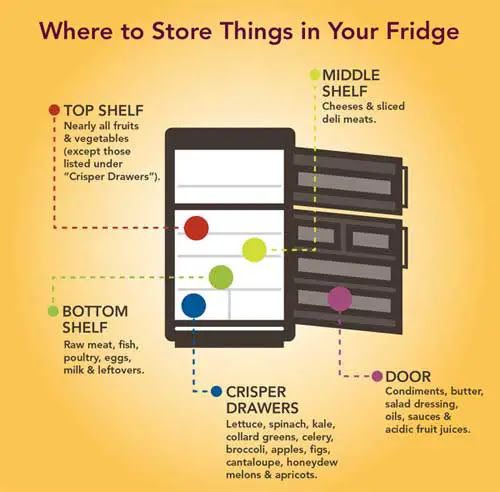 Should You Toss Moldy Food?

Minimizing food waste means using up every morsel of food possible, but what should you do if you notice signs of spoilage, like mold? The “rules” about when it’s safe to eat moldy food or not vary depending on the type of food. Generally speaking, if the food is hard, such as a brick of cheddar cheese or a carrot, you can cut off the moldy section (plus about one inch around it) and use the rest.
For softer foods, they should be discarded when mold is spotted because, the fact of the matter is, mold can be quite dangerous, and its roots can easily permeate soft foods, contaminating areas that appear to be mold-free. You may also need to toss nearby foods that may have touched the moldy area, as mold can spread quickly and easily, especially in produce.

Moldy foods that you throw away should be put into a small paper or plastic bags so the mold cannot escape. The USDA has compiled the chart below to help you determine when a moldy food should be kept or discarded.6 That being said, if you’ve got containers of food sitting in your fridge for long enough to get moldy, you’re probably not planning out your meals as efficiently as possible.

Before you go food shopping, make a meal plan for the week. Do a thorough check of what you already have on hand so you don’t let good food go bad, and have your meals planned so the fresh foods you buy get eaten in a timely manner (and while they’re still fresh).

Take Expiration Dates with a Grain of Salt

Labels like “use by” and “sell by” on foods aren’t actually an indicator of food safety, as many believe them to be, and, an NRDC report found, more than 90 percent of Americans are throwing out food prematurely because of misunderstandings of what food dates actually mean.7 In short, many foods are still safe to eat even after they’re expired.

With the exception of infant formula (the only food product with a federally regulated date label, as the nutrients in the formula decline over time), the rest of the food market has no such federal dating regulations, and the end result is a veritable free for all, with some states requiring food dates and establishing selling restrictions based on them and others not.

Most manufacturers view “use by” or “best by” dates as a tool to protect their product’s reputation. They want you to consume their product at its peak freshness and flavor, which means many set food dates conservatively. Yet, the food is many times still safe to eat after the date expires, often with minimal, if any, changes in taste or texture.

In the case of “sell by” dates, these aren’t even meant for consumer use at all. They are actually there as tools to help retailers ensure proper product turnover when socking shelves, yet many consumers believe it is a measure of food safety. The dates lead to so much confusion and food waste that the report authors suggested making the “sell by” dates invisible to consumers. The researchers concluded that food dates generally lead to good food getting thrown away, and may at the same time prompt you to eat a food that’s actually spoiled because of ‘undue faith in date labels.

Ultimately, the greatest factor impacting whether your food is “safe” isn’t total storage time, anyway, but rather is related to how much time it spends in the temperature “danger zone” (between 40 to 120 degrees F)8 – a factor you have little way of monitoring.
Posted by arclein at 12:00 AM