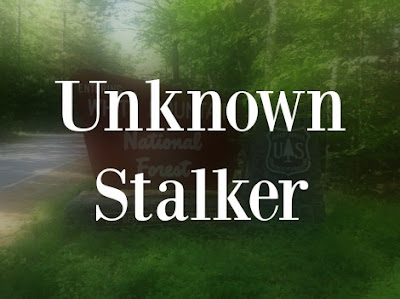 This appears to be a Sasquatch.  The odor has been associated many times with the Sasquatch and this type of hut or shelter has also been associated as well.  There have also been rare reports ( at least one )of human women been kidnapped as mates so hanging around this neighborhood may well be a bad idea.


We already suspect that this primate happens to be a primate human hybrid anyway.


This is the first report of stalking though that i have come across and we really do not know.  Taking the salt is a good sign and a bushel of apples can be tried.   Perhaps a bar of soap as well after you demo its use on a dog..  He may simply want to trade and communicate and possibly senses that you may be open to that.

I just came across this website while I was doing research for a new book that I'm planning on writing, however, what I read on this website (that brought me to this email), perfectly describes a creature I had encountered in my backyard at my last residence in Campton NH, which happened last spring. However, I had moved since then and just settled in just 2 miles down the road, and I'm now experiencing the eerie feelings etc.. I had then, yet I haven't physically seen "it" yet. But it has an odor, really nasty too. Please read this thru, it is not for attention whatsoever, nor a wild imagination gone wild :) just a little humor, but in all reality, this is a true account that you or someone you know just might really be interested in if you are serious about unknown creatures.

Recounts of that night; it was around midnight and I had just got home from visiting family, and I was talking with a friend to let him know I was ok when I had seen something large, and wasn't sure what it was, however I ran into my house cause I had this sick feeling among other emotions I can't really describe. My friend (a Marine) was concerned, so he stayed on the phone with me trying to calm my panic down. However, it only escalated, it seemed to be outside my door, then when I went into another room, there too it was outside my window as if it were stalking me. This went on for a few hours. I tried to stay very quiet as possible and whispered when I talked to my friend. Whatever it was, it had made an abode on the steep hillside behind my house deep in the woods, (It used pine trees and appeared almost tepee-like yet very sturdy, when I checked it out days after the event), and there was a stench that's worse than a wet dog. Whatever this thing was, it most definitely was not my imagination (my friend could hear strange noises, grunts, sharp high pitch sounds that he or I could not explain, nor have ever experienced before). I still don't know what it was, it stays to the shadows.

My friend had advised me to leave a peace offering of salt, so I had taken his advice and put out a bowl of salt filled (completely to rim), just to try it out after dinner the next day. Thing is though, the next night, I smelt it first (there was a space under main entrance door, at the rear of the house, cause it was an old farmhouse which in the winter I used to cover it to keep out drafts), then heard the cracking of wood on porch, and I was so frightened that I had hid in the most middle of rooms and stayed low and as still as possible, but whatever it was, it didn't stay long and in the morning, the whole bowl was gone. Not knocked over, nothing, just gone. No salt trails, nothing. I had checked my security cameras and all I could see was blurred interruptions as if my system was having technical issues which never happens, but it was a newer camera that I had put in earlier that day, but I have been slowly going thru two years of 24/7 footage on my older, yet best IR-night vision system I had ever had, but had ran out of recording space since I was on the road much at that time that it was tough to keep up and save important recordings. Also, I had moved down south of Boston, MA in June and system was in storage, but since I just recently moved 3 weeks ago down the road, and yet into deeper wooded area by the river, from where this incident occurred, I plan on finishing going through all footage with my time and saving anything abnormal that I find for evidence to share in the scientific community. The only description I can give despite it remaining in the shadows it's at least 8-9 feet tall, lean build, stands tall without hunching much, fur all over that is dark, seems to be intelligent, and it stinks.

Since I have had this strange experience/encounter with some type of the unknown, I haven't spoken to anyone except my friend (who thinks its Bigfoot) about this out of fear of ridicule etc... I don't have psychological issues, yet I have talked to psychiatrist and psychologist, whom have all said I am of sound mind, and had all sorts of testing along with PET scans to rule out illness, yet I swear I'm going crazy, but the specialist all said that is normal. I do believe in the unknown, because life as you know, has much of the unknown still out there hiding or just hasn't been truly documented. Also, I do help others out when they claim they are being haunted, just to help them so they are not afraid to live wherever they are, etc...but that's another talk if you ever wish to discuss that further.

Now, back to this unknown creature or "it", since I have moved in my place, I have been here for several weeks, but the past few days, I have noticed that I am being stalked thru the woods. My family had come up for the holiday weekend, and they had noticed the foul sickening stench which I had to dismiss it as a mouse that could have passed, and they took that as a logical answer, but the smell would linger and be constant if that were true and not at night when it keeps coming back. So, whatever "it" is, it seems to have taken a liking to me, and knows I am back again which leads me to believe that it has an excellent sense of smell or it travels much, or both I don't really know. However if you wish to investigate, please feel free to contact me anytime since whatever this is is now out there again watching closely, so I would make perfect bait for any investigation. I really do wish that somehow, someone who knows how to document well, would contact me so that this could be properly documented and brought forth to communities that the truth of "unknowns" really do exist in our lifetime.

Thank you so much, and you already have my return email, so please don't hesitate to contact me should you feel you would like to investigate, or know someone who would love too. Also, please don't take this as false, it really is true and I had mentioned everything as accurate as possible. I don't have proper gear nor manpower to actually document, so I am sharing my story since this really needs attention from someone like you, or others you know in the scientific community. I only know and have colleagues in space engineering or weather, etc...none whom are really into cryptozoology or this type of "unknown" creature. So please give this some serious thought on contacting me, and I beg you to not just discard this "possible best credible finding" as rubbish. Also, should you choose to investigate this, please, I don't want to be ridiculed, but I will be the best at helping to document and lure out this thing with your help. Thank you again for your very valuable time in reading this. The truth is really here.

AA
The White Mountains of NH
NOTE: I contacted the witness and found her to be very credible...well-educated and professional. The witness currently and previously lived in close proximity to the White Mountain National Forest...which had a well-documented history of unusual activity. We are in the process of contacting a reliable investigator in the witness' area. Lon
Posted by arclein at 12:00 AM