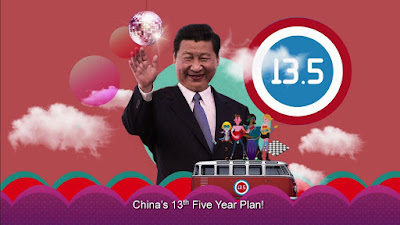 At the very best, central planning can support major capital outlays, but truly little more.  After that it must facilitate a communal system that supports best practice. Gwettting that wouod save the world an awful lot of greif.

Capital spending allowed China to build an apparent modern economy.  Problem is they inevitably ran up against the need for customers to support a modern economy and that is their present struggle.  That entails giving up a lot of control to the population.


At least the ongoing consultation process allows capital to eventually be deployed somehow and that is good.  Far better that a supreme emperor dallying with his wives.  That much good can come out of it all is left up to the ingenuity of the Chinese people who have my complete faith..

Planning an Economy Is More Difficult than Making a Viral Video
Friday, October 30, 2015


Earlier this week, the Chinese Communist Party rolled back one of the most egregiously illiberal vestiges of its bloody recent past by replacing the one-child policy with a new and improved limit of two children. Going forward, urban Chinese are permitted legally to grow their families slightly larger than before, even if their first child is a boy. (Rural Chinese were previously allowed to “try again” if their first child was a girl.)

The one-child policy was implemented in 1979, nominally, to allay social and environmental concerns that would supposedly be caused by “overpopulation.” China’s population had reached a level just shy of 1 billion. One of the policy’s originators calculated China’s optimal population to be 700 million; he estimated that a one-child policy would reduce the number of Chinese to that level by 2080 without famine or genocide.

It was an abrupt reversal of Mao’s decades-long encouragement to grow the Chinese labor force by having as many children as possible.

As times changed, so did the trendy Communist policies. By the time Deng Xiaoping took over as China’s dictator, he opened China to foreign trade, dismantled the farm commune system, and permitted greater freedom for peasants to bring their goods to market.

Beijing wanted to plan economic growth, so it expanded freedom in the market and drastically reduced freedom in the family. Reducing the birthrate, they thought, would automatically increase per capita GDP as previous generations faded.

The Futile Hamster Wheel of Planning

Despite implementing market-oriented reforms, Deng remained a central planner at heart. His policies were part of a new kind of five-year plan used by China for decades and modeled after Stalin’s controlled-economy approach in the Soviet Union. Five years at a time, the government would announce its economic goals and how it planned to reach them.

Soviet five-year plans were infamous for their ludicrous precision, including setting quotas for output of nails. When evaluated by quantity, Soviet factories would produce minuscule nails. When evaluated by weight, they would produce gigantic, heavy nails. Both varieties were useless to people who needed nails, but that was irrelevant to the economic planners seeking to reach their arbitrary goals, and the bureaucrats who sought to appease them.

The five-year-plan approach remains a mainstay of China’s government’s policies, and at the Communist Party conference this week, the state announced the 13th five-year plan — the shi san wu, literally meaning “13 five.”

No one outside of the Chinese Communist Party really knows what the 13th five-year plan contains (another unveiling is scheduled for March 2016), but speculation is that it will focus on welfare-state reforms, environmental policies, and subsidies for local government spending.

To generate buzz for the plan outside of China, the government commissioned a flashy video that extols the virtues of experts and planning.

One of the most revealing parts of the video is its focus on experts and consultation. A segment of dialogue highlights this approach.


But how do they make all the plans?

The Curious Task of Economics

Hayek understood the market as a process for gathering all of the tiny bits of constantly changing information dispersed among all the individuals in an economy. He saw experts as overly confident in their information and completely unequipped to make decisions on behalf of people they don’t even know.

In his great book The Fatal Conceit, Hayek articulated one of the most blistering critiques of those who would plan the lives of others: “The curious task of economics is to demonstrate to men how little they really know about what they imagine they can design.”

He expounded on this provocative idea by explaining how economic order is not so much a state to be reached as a constantly evolving flow, changing by the moment as it responds to the needs, wants, and desires of individuals.


To the naive mind that can conceive of order only as the product of deliberate arrangement, it may seem absurd that in complex conditions order, and adaptation to the unknown, can be achieved more effectively by decentralizing decisions and that a division of authority will actually extend the possibility of overall order. Yet that decentralization actually leads to more information being taken into account.

Instead of five-year plans (or central, top-down plans of any duration), Hayek argued the only way to “plan” an economy would be to decentralize economic decision making to the lowest possible level. In most cases, that would mean permitting individual decisions to accumulate into an emergent economic order, moment by moment.

Despite the best-laid plans of Chinese Communist Party leaders, an unplanned order emerges, based on what individual Chinese people value. A five-year plan doesn’t prevent market forces from acting, but it does make them less effective in serving people well.

When fully announced, the shi san wu will probably include some good market-based ideas, but it continues the Chinese Communist Party’s admittedly crazy notion that it can forcibly design an economy for normal people based on the ideas of experts.
Posted by arclein at 12:00 AM