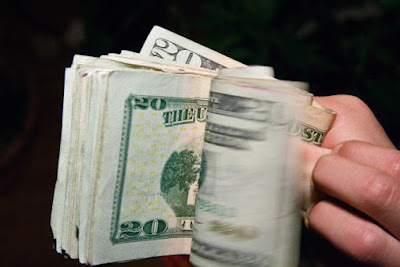 The real problem of course is that this is surely busness as usual for Big Pharma.  This gives us a pretty good eyeball looksee on industry practice.  They even have their doctors on quotas no less.

There is something so terribly wrong when a system is so distorted by money.

Others are doing much better and we need to completely revisit the whole industry..

By Chris Morran October 29, 2015
http://consumerist.com/2015/10/29/pharma-biggie-hit-with-125m-penalty-for-illegal-kickbacks-to-doctors-falsified-insurance-forms/
A subsidiary of multibillion-dollar international pharmaceuticals company Allergan has agreed to plead guilty to a felony charge of healthcare fraud and pay $125 million to close the books on criminal and civil liability claims tied to the subsidiary’s illegal marketing activities for seven different name-brand prescription drugs. Warner Chilcott USA Sales LLC (whose connection to Allergen we’ll get to later) has agreed to plead guilty in federal court to felony criminal charges of paying kickbacks to physicians to get them to prescribe the company’s drugs. Warner Chilcott was also caught manipulating prior authorizations to induce insurance companies to pay for prescriptions of osteoporosis drug Atelvia that the insurers may not have otherwise paid for. To top it all of, the company also made unsubstantiated marketing claims on another osteo med, Actonel.

While the company won’t be going to jail, former Warner Chilcott President W. Carl Reichel might be. The erstwhile exec was arrested today in Boston, and according to a newly unsealed indictment [PDF] has been charged with conspiring to pay kickbacks to physicians.

The DOJ accused Warner Chilcott management of directing employees to violate federal law by paying doctors to prescribe certain medications, including Asacol (for Chron’s disease), Doryx (an antibiotic used to treat acne that is at the center of a different legal hurricane), Enablex (for urinary incontinence), Estrace (for hormone treatment), and Loestrin (an oral contraceptive).

This wasn’t a matter of merely slipping the doctors an extra ten-spot or buying them a beer at the doctor bar.

The Warner Chilcott staffers also lied to insurance companies. When a generic or less-expensive drug is available, many insurers won’t pay for certain name-brand drugs, including Atelvia, unless a physician specifically asks for it.

In order to get around this, some company employees would fill out deceptive prior authorizations for Atelvia using information that was often inconsistent with the patient’s needs. Some Warner Chilcott employees actually went so far as to pretend to be physicians in their representations to the insurers.

Sellers of Actonel were told by Warner Chilcott management to make unsubstantiated superiority claims about the drug during their sales pitch. They would tell doctors it was better than competing drugs because of its supposedly unique “mechanism of action,” employing misleading visual props to show off purported benefits of the drug that had not been demonstrated in clinical trials.

For its sins, Warner Chilcott will pay a criminal fine of $22.94 million, plus another $102.06 million to the federal government and the states who made payments through Medicare, Medicaid, and other programs based on the company’s bad behavior.

“Doctors’ medical judgment should be based on what is best for the patient, and not clouded by expensive meals and other pharmaceutical company kickbacks,” said U.S. Attorney Carmen M. Ortiz for the District of Massachusetts. “Pharmaceutical company executives and employees should not be involved with treatment decisions or submissions to a patient’s insurance company.”

Following Warner Chilcott U.S. Sales LLC’s connection to Allergan is a bit like sitting through the “begat” section of the Book of Genesis. The sales company is a subsidiary of pharmaceutical manufacturer Warner Chilcott PLC. Actavis acquired Warner Chilcott in 2013. Just a couple months ago, Actavis finished its acquisition of Allergan, but chose to retain that company’s name for the entire operation. Now Allergan and Pfizer are talking about getting together… it’s messy.

Another former district manager, Landon Eckles, was criminally charged earlier this month for alleged HIPAA violations relating to the allegations of falsified prior authorizations.

And last week, Rita Luthra, a physician in Massachusetts, was charged with, among other things, allegedly accepting free meals and speaker fees from Warner Chilcott in return for prescribing its osteoporosis drugs.
Posted by arclein at 12:00 AM