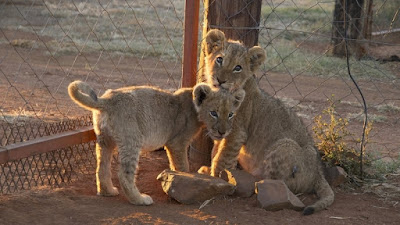 I find this particularly outrageous.  I personally accept that animal husbandry including wildlife management includes the need to kill individual animals.  In North America it is even becoming a pressing need as the real carnivores begin responding to the present almost complete lack of hunting pressure on traditional prey species which we also should be actively harvesting and managing.

Yet this is beyond anything i ever imagined been undertaken.   Catering to fools who simply wish to kill a faux dangerous animal for bragging rights is disgusting.  Having those same fools set up in a hide confronting the real thing is what they richly deserve.  Man hunters are real and become known for their success.

At least the Grizzly hunter is confronting the real thing and he has to be good.  Grizzlies will stalk before they charge and you may be the target.  After all you may be protecting the bait.  At thirty miles per hour and under one hundred yards, you have about three seconds to blow his head off.

The same story hold true for a real lion who can also leap over tall objects to fall on you.

It is all a little like going up against the Great White with a bowie knife.  You have one chance to get it right after he detects your presence after which your advanced technology is scrap..

The cubs pictured above are among the 1,000 baby lion cubs who are bred every year for no other purpose than to be shot by tourists.
https://www.change.org/p/south-african-government-please-ban-the-cruel-breeding-of-blood-lions
These "Blood Lions" are taken from their mothers within two hours of their birth and are hand reared by their owners who tame them so they are easier to kill. The cubs grow up loving humans and are coddled by hundreds of paying tourists who are told that the lions are being bred for conservation. However, as soon as the cubs grow too big, they are sent to a game reserve where they are stuck in small, crowded pens with dozens of other cats. Pictures of the lions are then taken and put on the Internet so that tourists from around the world can pay thousands of dollars to claim them as the victims of their next hunt in a practice known as "Canned Hunting".
The chosen lions are taken into a different enclosure where they are starved and drugged to make them easier targets. The lion handlers and armed tourists then enter the enclosure in trucks. The starving lions recognize their handlers and often head toward the truck hoping for food but are met instead with a barrage of bullets.
It often takes over 10 bullets to bring the grown lion down, with the animal writhing in agony much of the time. Once dead, the lion's head is presented to its hunter as a trophy and its bones are sold to China for pseudo-medicinal purposes.
This is the fate awaiting these cubs.
As inhumane and cruel as this breeding of Blood Lions is, it is NOT illegal. Please sign this petition to let the South African Department of Environmental Affairs know that legislation protecting these lions must be passed!
Please join us in asking the  Minister of Environmental Affairs, Mrs Edna Molewa to ban the practice of canned hunting and blood lion breeding. Today in South Africa over 8,000 blood lions are pacing their pens and awaiting their deaths. The blood lion population is expected to grow to 12,000 in the coming years.
Time is running out for these lions, your support and public awareness is urgently needed to stop this horrific practice once and for all!
Posted by arclein at 12:00 AM