Update on the CEO who Made $70,000 Minimum Wage for all his Employees 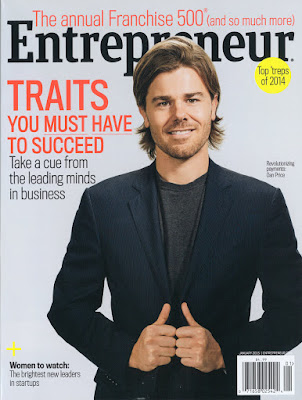 So far so good.  Obviously it is the right business in which to do this or it could not be attempted.  This is as obviously giving him the best of everything else.

If that growth rate is sustainable, then we will see others doing the same.  A lot of costs disappear when you have a highly motivated staff who has your back.  After about three years it will be worthwhile to see what worked and what did not work.

What it does do is put employers on  notice everywhere that the price for talent is 70K.
.
Update on the CEO who made $70,000 minimum wage for all his employees

Gravity Payments has a lot of very happy employees today.

In early 2015, Dan Price, the founder of Gravity Systems—a credit card processing company based in Washington—shocked his employees by announcing he was raising his company's minimum wage to $70,000 per year. The story went viral and not surprisingly, conservatives like Rush Limbaugh howled "socialism!"

Anyway, he's not tying this to anything other than employment. He's not tying it to performance. He's not tying it to sales. This is pure, unadulterated socialism, which has never worked. That's why I hope this company is a case study in MBA programs on how socialism does not work, because it's gonna fail. My guess is that just like when Solyndra went south, there will not be a story on Gravity Payments succumbing to gravity and going under.

So how is Gravity doing these days? Incredible:

Revenue is growing at twice the rate it was before Chief Executive Dan Price made his announcement this spring, according to a report on Inc.com. Profits have doubled. Customer retention is up, despite some who left because they disagreed with the decision or feared service would suffer. (Price said he’d make up the extra cost by cutting his own $1.1 million pay.)

Not only has employee turnover been extremely low, they've attracted new talent:

Gravity was inundated with résumés -- 4,500 in the first week alone -- including one from a high-powered 52-year-old Yahoo executive named Tammi Kroll, who was so inspired by Price that she quit her job and in September went to work for Gravity at what she insisted would be an 80-85 percent pay cut. "I spent many years chasing the money," she says. "Now I'm looking for something fun and meaningful."

That's incredible growth. Stay tuned and we'll follow to see if Gravity can continue their rise in years to come.